Walmart (NYSE:WMT) is the largest seller of groceries in the U.S. In 2016, the company accounted for nearly 15% of all U.S. grocery sales, twice the market share of the next-largest competitor. More than half of Walmart's domestic revenue comes from groceries.

Despite this dominance, Walmart isn't sitting on its hands. The company recognizes that the grocery market and consumer preferences are changing. Long immune to the rise of e-commerce, grocery is now becoming a battleground.

Walmart already offers its free online grocery pick-up service at 1,200 stores, giving customers the option to have their orders loaded into their cars. The company announced its next step on Wednesday, a nationwide rollout of its grocery delivery service. With Amazon.com (NASDAQ:AMZN) recently bringing Whole Foods delivery to its Prime Now service, Walmart is jumping on the grocery delivery bandwagon. 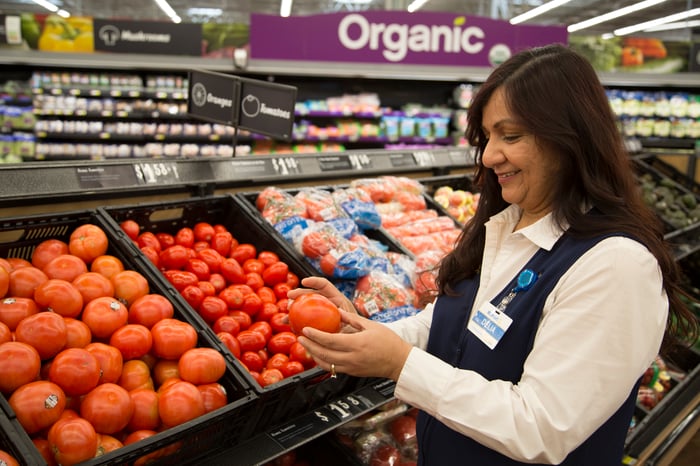 Groceries to your door

Walmart has been testing its grocery delivery service, adding test markets throughout 2017. The company is now ready to bring that service to a much broader set of customers. Walmart plans to offer the service in more than 100 metro areas across the country by the end of the year, up from just six markets today. Deliveries will come from over 800 stores, and more than 40% of U.S. households will have access to the service when all is said and done.

Unlike many grocery stores that offer delivery via Instacart, Walmart will handle the grocery shopping portion itself. The company has over 18,000 personal shoppers, with plans to add thousands more this year to power the delivery rollout. These shoppers go through a three-week training program to ensure that customers don't receive sub-par produce and meat. Walmart's prices will be the same as in-store prices, whereas Instacart marks up prices in some cases.

The delivery portion will be handled by third-parties. After Walmart's shoppers have assembled an order, a request is sent to a delivery service to pick up the order and deliver it to the customer's door. Walmart's pilot program used a variety of delivery services, including Uber, Lyft, and Deliv. The company has also tested out delivering orders itself in some markets, but it seems that it's now opting to outsource that part of the process.

Walmart will charge a flat $9.95 fee for grocery delivery, along with a $30 minimum order size. For comparison, Whole Foods delivery through Prime Now is free for Amazon Prime members, although a tip is expected. Prime members pay $99 per year, also receiving unlimited two-day shipping and other perks. Another difference: Walmart is known for low prices, while Whole Foods, even after price cuts from Amazon, is still awfully expensive.

On top of the grocery delivery rollout, Walmart plans to vastly expand its grocery pickup service. The company expects to add another 1,000 stores to the service this year, bringing the total to around 2,200 stores. That service comes with no additional charges beyond the cost of the groceries.

It would probably be cheaper for Walmart to deliver groceries itself, assuming a particular market had enough online order volume. But that would also require the company to build out delivery infrastructure, slowing its expansion. With Amazon embracing the use of contractors to deliver Prime Now orders, Walmart opted to do the same by outsourcing to third-party services. With personal shoppers already in place to handle pickup orders, that was the path of least resistance.

Because Whole Foods is still so pricey, it's not really a direct competitor to Walmart. But that could change as Amazon continues to make changes. Delivery may very well be the future of the grocery industry, and Walmart is making sure that it won't be left behind.