Shares of Carvana Co. (NYSE:CVNA) tumbled last week after the company reported record revenue that missed analyst estimates and a larger fourth-quarter loss compared to the prior year. Let's take a look at the key financial figures and a couple of takeaways to put the weak results in perspective.

Fourth-quarter sales jumped to $265 million, up from the prior year's $107 million but still below analyst estimates for $270 million. The main issue investors had difficulty swallowing was a higher-than-expected bottom-line loss. Carvana lost $47 million in the quarter, or $0.45 per share, which was worse than the prior year's $36 million loss and an estimated per-share loss of $0.39.

Despite the misses, this is still a rapidly growing company and that expansion doesn't come cheap. Consider these figures from the quarter: Retail units and revenue jumped 141% and 148%, respectively, to 13,517 units and the previously mentioned $265 million. In the fourth quarter alone, Carvana launched in five new markets, bringing its total number of markets to 44 and its total percentage coverage of the U.S. population to 41.2%, an incredible jump from 19.7% at the end of 2016.

Carvana has plenty of room to continue its market expansion. Management plans to open in 30 to 40 markets in its fiscal 2018 and hopes that will push its U.S. population coverage to 55%. It's inevitable that its top-line growth will slow, but investors can still expect triple-digit unit and revenue growth throughout 2018. 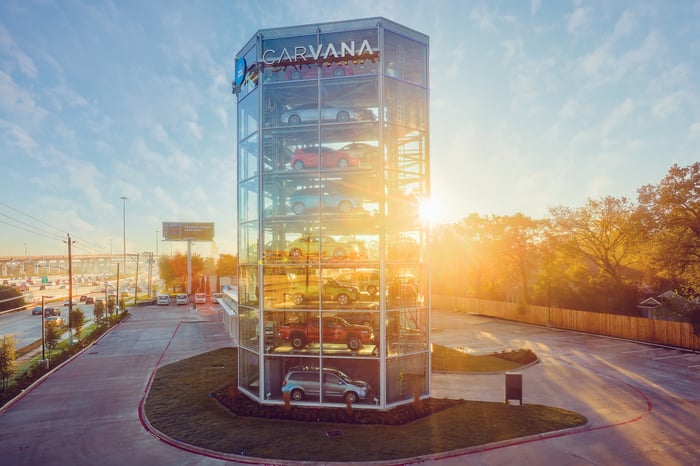 Show me the profitability

Increasing the number of markets Carvana covers is one obvious way to grow the business, but another avenue is through raising its profitability per unit sold. During the fourth quarter, its gross profit per unit (GPU) jumped to $1,619, up significantly from the prior year's $1,184 mark. That wasn't a one-quarter wonder, either, with the full-year GPU up $516 over the prior year's result.

There's still ample room to improve GPU. Throughout 2017, the company was able to reduce the average days to sale for vehicles in inventory, and believes it can expand the markets covered without substantially adding to its inventory, improving both its scale and GPU. Investors should expect -- rather than hope -- that Carvana's GPU will jump a similar $500 annually in 2018 on its way to achieving its $3,000 mid-term goal.

Was it a bad quarter?

It doesn't seem fair to say it was a horrible quarter for Carvana, despite missing estimates. The driving force behind the wider losses was simply ballooning SG&A expenses, which jumped to $66.8 million during the fourth quarter, compared to the prior year's $36.7 million. Carvana is actually making progress because its top-line and gross-profit growth is outpacing SG&A, which means SG&A percentage of total sales is declining -- eventually its top-line and gross profits will eclipse SG&A and other expenses. Partly due to that declining percentage, management expects EBITDA losses to peak during the first-quarter of 2018 before declining significantly in the second-quarter.

It's tough to gauge such young companies on a short-term quarterly basis as the metrics will swing wildly, making for imperfect guidance and estimates. Ultimately, this is a stock that's largely moving in the right direction as it improves its scale, optimizes its acquisitions, widens its market coverage, and increases its GPU. Investors will likely look back at fourth-quarter results and wonder what everyone was worried about.