At the risk of stating the obvious: It is not so easy to find great stock investing ideas. There are just so many companies, and no individual can research them all.

That's one reason some people like to follow the portfolio moves of well-known investors such as Warren Buffett and Bill Ackman: They provide us with solid ideas to dig into, but on a list that is already culled down to manageable size.

In this case, we have a list of two: One is Monsanto Co. (NYSE:MON), which the Oracle of Omaha boosted his stake in; the other -- a brand-new position for Ackman's Pershing Square -- is NIKE Inc. (NYSE:NKE). Here's why you might want to be researching these companies.

Agriculture has always been a tough business, and it's likely to get even more difficult. Unpredictable weather can take a toll on crop production, and climate change is exacerbating that risk. In addition, the total acreage of land suitable for agriculture is on the decline, water demand is increasing –- and did I mention farming is a tough business?

Simply put, farmers now more than ever need a company like Monsanto, the leading producer of genetically modified seeds and crop protection products, to help them reduce their need for pesticides, and improve their crop yields. 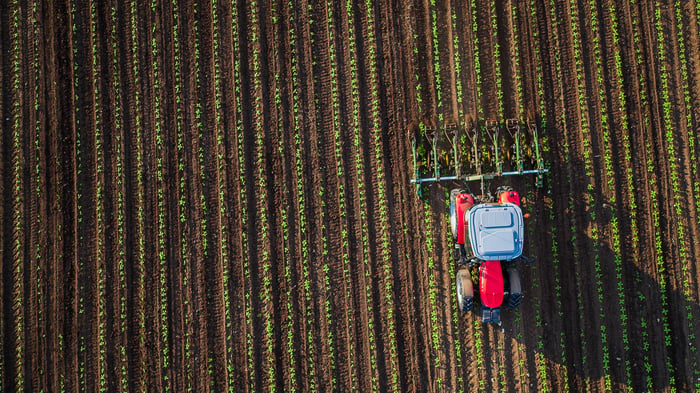 Buffett loves to invest in stable companies with wide economic moats, and that's exactly what Monsanto offers. Its potent portfolio of seed trait patents has cemented its leadership position in the agricultural biotech industry. It benefits from a virtuous cycle, because those patents help drive premium pricing, and with such dominant market share, it can afford to invest roughly 10% of sales into research and development to stay ahead of the competition. That combination is likely part of why Berkshire Hathaway increased its position in Monsanto by 32% in the quarter that ended Dec. 31.

Management expects its core pipeline of upcoming products to deliver up to $25 billion in peak net sales -- peak net sales reflects estimated global sales opportunity near peak penetration -- which would be a healthy top-line boost. For context, Monsanto generated $14.64 billion revenue in 2017. Investors who buy now will also book a small profit rapidly if Bayer's acquisition proposal goes through in 2018: It's hoping to buy Monsanto for $128 per share, a 4% premium compared to today's prices.

Given Mosanto's healthy pipeline of products, its deep list of patented seed traits, and shares trading at a slight discount to a bid that's on the table, it's easy to see why Buffett increased his stake. If that stock isn't your style, but you want to capitalize on the growing need for products that help farmers improve their yields, check out this list of other top agriculture stocks.

When investors click on Nike's investor relations page, they are confronted with a simple message: "Nike, Inc. is a growth company." Although 2017 wasn't necessarily a bad year for the apparel juggernaut, it did struggle in the U.S. market as it worked through issues involving slow-moving inventory, and hit a couple of speed bumps around its margins. That said, Nike has more of a growth story than you would expect from such a large company.

The cornerstone of that growth story lies in China. Consider: The apparel company's U.S. consumer base is roughly 50 million people, but executives believe its consumer base in China should eventually reach 10 times that figure. In the nearer term, it expects its annual growth rate in China will land in the low to mid-teen percentages between 2018 and 2022.

While Nike's growth in the U.S. won't match its gains in China, even modest growth domestically coupled with expanding digital efforts will prove valuable. In fact, Nike expects its e-commerce revenue to jump from 15% of total sales to 30% within five years – and cutting out the middleman through online sales should help reverse its margin woes.

At a time when many have become cautious about investing in Nike -- the stock rose 23% in 2017, in spite of margin woes and U.S. market struggles -- Ackman jumped on board in the fourth quarter, buying 5.8 million shares to start a position that instantly accounted for 6.21% of Pershing Square's portfolio.

Buffett liked what Monsanto had to offer with its pipeline of products, market share, and list of patented seed traits, and he snapped up shares of a company with a durable advantage. Meanwhile, Ackman saw a massive apparel company with a growth story overseas. Just because they bought shares doesn't mean you should, but it does indicate that Monsanto and Nike are certainly worth further research.