Introduced last fall, Restock Kroger aims to produce $400 million in incremental operating margin by the year 2020. According to executives, the various initiatives will help Kroger generate $4 billion in free cash flow over the next three years, which is approximately twice the free cash flow generated in the preceding three years.

Given that comparable-store sales in 2018 are expected to remain under pressure, with a projected increase of just 1.5% to 2%, Kroger's leadership would like investors to judge the company by the sum total of the various objectives undertaken within the Restock Kroger plan. The net effect is embedded in the company's 2018 estimated range of diluted earnings per share (EPS), of $1.95-$2.15.

Shareholders have zeroed in on a different number entirely, which management was loath to analyze during the recent earnings call: fourth-quarter 2017 and current-year gross margin. Gross margin declined by roughly 30 basis points, to 21.9%, during the final quarter of 2017. Investors were expecting improvement from vendor initiatives undertaken over the last three months. Disappointment in this measure played a large part in the post-earnings deterioration of Kroger stock. 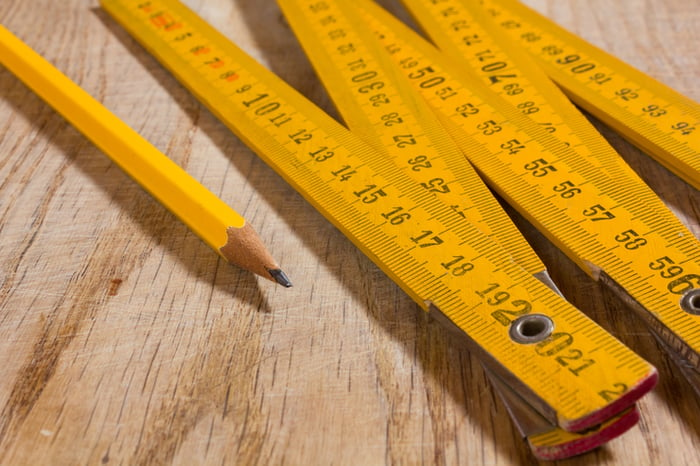 During the conference call, the divide in metrics became apparent, as analysts repeatedly asked to discuss gross margin and executives tried to shift the conversation back to EPS and the grocer's big picture. CEO Rodney McMullen reiterated a caution made on previous earnings calls, that investors shouldn't extrapolate too much from gross margin in any given quarter.

... Because every time the results [are] a little different than what you expect, that becomes the only talking point, versus our promise is to deliver on Restock Kroger over the three years, to deliver the $6.5 billion of free cash flow, to deliver the $400 million in operating profit growth over the next three years and as it relates to 2018 specifically, to have ID [comparable] sales between 1.5% and 2% and earnings per share from $1.95 to $2.15.

In the end, investors do base much of their stock pricing judgments on the items Schlotman listed above. So, if the company will ultimately be able to achieve its projected EPS, say through cost-cutting and productivity improvements that benefit operating margin, why should investors worry about gross margin, the difference between sales and the cost of products sold?

Perhaps shareholders are worried about management's adamant desire to not be beaten by competitors on price. In September, I described what I called a coming "battle royale" in the grocery industry, due to a wave of domestic competition exacerbated by foreign entrants into the U.S. market, like privately held German grocery chains Aldi and Lidl.

This competition is materializing, and showing up in Kroger's gross margin, which throws into relief McMullen's repeating last week of his previous assertions that "[we're] not going to lose on price." I have the same misgivings now, which I described in my September article: "Cutting prices is simple, but retaining customers on price alone is not. A more sustainable strategy is to shift more resources away from price investment, and toward the manufacturing, brand, and technology investments which boost inherent advantages."

Weeks after I wrote the above, Kroger announced just such a shifting of resources through its Restock Kroger initiative. Yet investors may ultimately find the plan lacking if management won't engage in a discussion of gross margin trajectory. That's because, in the razor-thin profitability of the grocery sector, a swing of even a couple of percentage points in gross margin can have an outsized effect on operating margin -- and ultimate profitability.

Moreover, there's much complexity within Kroger's profit and loss projections this year, from anticipated wage increases to the impact on 2018 EPS from the company's sale of its convenience store business and to the extent that investments in home delivery will impact net income.

Even with such complexity, management is asking investors to literally not worry about gross margin and remain focused on the business from a much broader and long-term perspective. While the intent is laudable, in the cutthroat grocery industry, such an approach to analyzing results isn't practical. And the disconnect between the metrics that management and shareholders want to discuss may continue to depress stock price, until 2018 quarterly results begin to dictate the narrative in either direction.