It takes a huge transportation network to get things where they need to go, and PACCAR (NASDAQ:PCAR) plays a key role in making those movements possible. The company specializes in making commercial trucks of all sizes and the parts that go into them, with well-known brands including Peterbilt and Kenworth seen running on highways around the world.

Over time, PACCAR has enjoyed substantial success, and shareholders have gotten the reward of stock splits over the company's history. Yet more recently, those stock splits have come to a halt, raising questions about whether something's fundamentally changed with the company's prospects. Let's look more closely at PACCAR's history of splitting its stock to see if another such move could be right around the corner.

Here are the dates and split ratios for the stock splits PACCAR has done in the past:

As you can see, the 2000s were a period of strong growth for PACCAR. The company made four stock splits in a period of just over five years, experiencing a huge growth spurt that vaulted it to the top of the truck manufacturing industry.

PACCAR has generally followed a fairly predictable strategy in deciding when to do stock splits. The share price had risen above $70 when the truck manufacturer decided to do a three-for-two split in 2002. By 2004, PACCAR saw the share price get up into the $80s, when it decided to do another split, and just two years later, the stock price had climbed back above $80 per share, prompting another three-for-two move. Most recently, in 2007, the stock got up to about $90 per share immediately before the company did its final three-for-two split, bringing the share price back down into the upper $50s. That proved to be the high point for years, with the commodities bust and financial crisis combining to knock the truck maker for a loop. 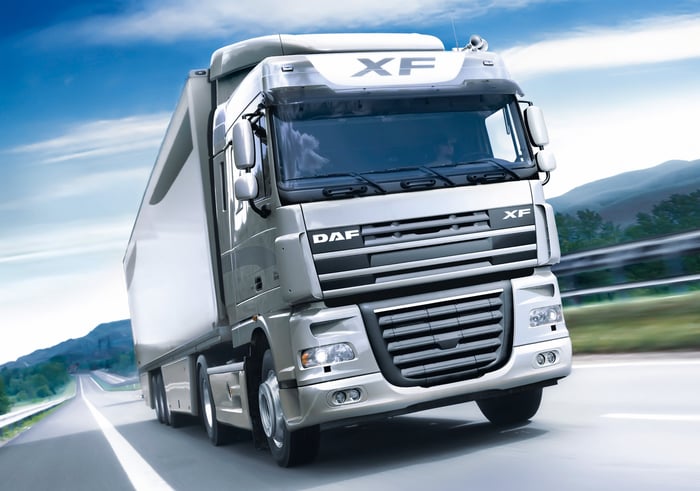 Why did PACCAR stop splitting?

Since then, PACCAR has had to work hard to recover. A rebound took the stock to new highs in 2014, but the ensuing slowdown in the industrial economy dealt a blow to the truck maker. More recently, though, renewed demand for trucks in North America and Europe has helped to push PACCAR's fundamental growth prospects higher. Late last year, the company said truck deliveries were extremely strong, especially among certain classes of heavy-duty commercial vehicles.

That push higher appears to be sustainable. Economic conditions are picking up in many places around the world, and greater levels of commercial activity mean more need for commercial transportation. Investors in PACCAR have been nervous about pressure on margin figures, and competition from other quarters could pose a threat to growth. Yet PACCAR is committed to staying on the cutting edge of its industry through spending on research and development. That should foster growth opportunities in the coming years.

Yet despite gains in its fundamental business, PACCAR still hasn't seen its share price climb back toward levels at which it would typically do a stock split. The stock currently fetches less than $70 per share, having fallen from nearly $80 just earlier this year.

It's possible that PACCAR will consider a three-for-two split if the stock price climbs back toward the $80s. At this point, though, investors should focus more squarely on whether the truck manufacturer can make the most from a favorable industry environment and fend off of rising competition. If it can, then PACCAR should be a good investment regardless of whether it does a stock split.