Please ensure Javascript is enabled for purposes of website accessibility
Log In Help Join The Motley Fool
Free Article Join Over 1 Million Premium Members And Get More In-Depth Stock Guidance and Research
By Jason Hall - Oct 25, 2017 at 8:31AM

The heavy-duty truck maker's profits and sales were up sharply, and management said it expects to see positive momentum heading into 2018. But an analyst question raised concerns about future profits.

PACCAR Inc. (PCAR 0.67%) reported strong results for its third quarter on Oct. 24. Revenue increased 19% and net income was up 16%, with both numbers even coming in ahead of Wall Street analyst expectations. And as is typical of Mr. Market, PACCAR shares fell as much as 7.5% during afternoon trading and closed down almost 6% on the day.

So what spooked investors following a solid quarter? There were a few comments from management on the earnings call that could have played a role in sending the stock price down. Let's take a closer look at PACCAR's results, as well as what management had to say, and what the long-term implications are. 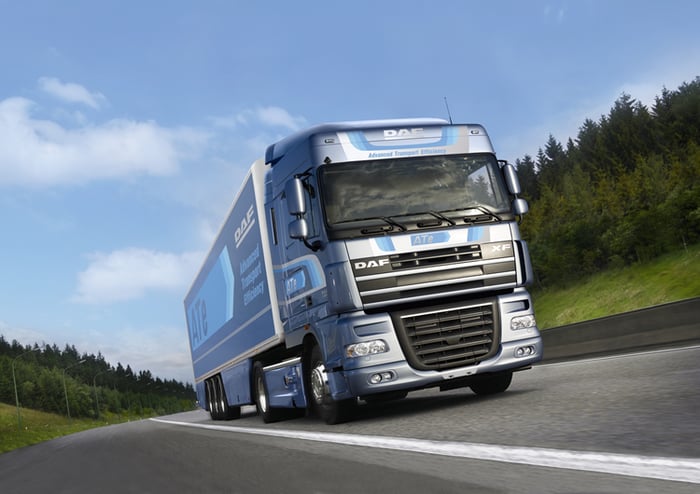 Sales and profits have accelerated on improving demand

So what spooked investors?

Management is optimistic wrapping up 2017 and heading into next year. On the earnings call, CEO Ron Armstrong said the company expects the U.S. economy to grow close to 2.5% this year, and between 2% and 3% in 2018, with strong demand for new housing and from the auto industry, as well as expanded industrial production. This growth is behind the company's expectations for increased demand for Class 8 trucks in North America. The expectations for Europe are similar to those for North America in terms of GDP growth and how this should drive increased truck demand.

However, one analyst on the earnings call raised a question about incremental margin -- the higher profits that additional units above this year's level should generate. Armstrong's response -- that gross margin percentage for 2018 would probably be in the same range as this year, between 14% and 15% -- didn't sit well. Here's what Armstrong said about incremental margin:

Right now, I guess I would say I expect gross margin for next year to be comparable to what we're seeing in 2017, at the market size estimates we've provided. I would say that if you look at the build rates for DAF and Peterbilt and Kenworth -- where they're currently at, if those build rates were able to be sustained for all of next year, the margins would probably be at the upper end of estimates that we've provided for 2018.

In general terms, this is something investors should pay attention to. A business like PACCAR's is designed to benefit from increased volume, which should produce higher incremental margins, since fixed expenses get spread across more revenue. But at the same time, this isn't something investors should be panicking about. On one hand, Armstrong's response is best described as being conservative. The reality is, predicting economic activity and truck demand so far out is an inexact science at best.

It's also possible investors weren't satisfied with Armstrong's statements about the future of trucking. Several analysts asked about electrification and driver automation in trucking, and Armstrong was steadfast that PACCAR expects it to take a number of years before those technologies are commercially viable and in high demand. With companies including Tesla and privately held start-up Nikola Motors both talking publicly about introducing battery-powered and hydrogen-powered Class 8 trucks within a few years, management's far more conservative language around alternative technologies could have also concerned some investors.

Yet at the same time, PACCAR has invested a significant amount of money into technology and innovation. The company opened an R&D facility in Silicon Valley this year and will spend more than $260 million on R&D this year. Next year, the company is beginning a truck platooning trial -- essentially using wireless communications and automation to "link" multiple trucks together -- in the U.K. in 2018. The company announced earlier this year that it was partnered with NVIDIA to bring self-driving technology to its trucks, and chances are its platooning test in the U.K. will be powered by NVIDIA's DRIVE PX 2 platform.

Management said on the earnings call that it will increase R&D spending to as much as $300 million next year, and part of that increase will be tied to the company's SuperTruck II program, which it just launched.

Whether it was something management said that spooked investors into selling PACCAR after earnings, or just a product of "profit takers" after a 20% run-up in the share price the past couple of months, long-term investors probably shouldn't be too worried. The company continues to dominate the truck market in North America and make solid gains in Europe, and if the economy in both areas remains steady in coming years, the company is likely to continue increasing its market share and becoming more profitable.

And when it comes to the risk of disruption from new technologies, investors shouldn't dismiss it out of hand. But at the same time, PACCAR is well positioned as a technology leader and is likely to be one of the companies playing a role in disrupting the status quo. What management said this quarter, and how the company performed, didn't really change the likelihood that PACCAR will remain a technology leader and truckmaker for years to come -- no matter how much technology changes who drives the truck, or what powers it.