NVIDIA has partnered with some big names and increased its chances of tapping a huge opportunity.

NVIDIA (NVDA 5.55%) and PACCAR (PCAR 3.22%) could soon bring Optimus Prime from the silver screen into the real world. PACCAR, maker of the Peterbilt 379 truck that plays the protagonist in the Transformers movies, is partnering with the chip giant to bring self-driving technology to trucks.

NVIDIA is aiming for the stars in self-driving trucks

PACCAR and NVIDIA recently revealed in Berlin that they have already developed a prototype self-driving truck based on the chipmaker's DRIVE PX 2 platform. What's more, the test truck is fully capable of driving itself without the need for any human intervention, thanks to a Level 4 automated driving system. 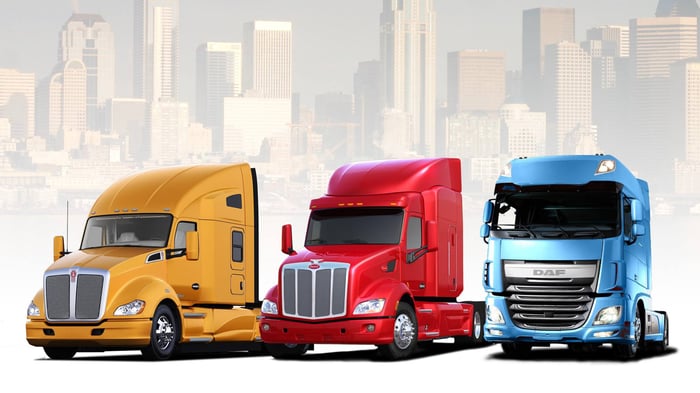 NVIDIA's steps in self-driving trucks could be a big deal, as it is targeting a 300-million-strong market that's expected to move toward autonomy. IHS Automotive (a subsidiary of IHS Markit) forecasts that annual sales of self-driving Class 8 trucks could hit 60,000 units in 2035, accounting for 15% of the total trucks in this segment.

The U.S. is expected to lead the way, as states are pushing for laws that will allow platoon testing of trucks on open roads. Platoon testing is a concept in which several trucks drive together in a tight formation, with the pack being controlled by the lead truck at the head of the formation and the rest being driven autonomously.

This would allow the fleet to enhance fuel efficiency by 15% thanks to lower wind resistance. What's more, the autonomous capability of the followers in the pack would drive down labor costs and also address driver shortages. The benefits of the platoon concept are encouraging states like Arkansas, Iowa, South Carolina, and California to modify driving laws to allow for testing.

In Los Angeles, for instance, earlier this month, three Volvo trucks were tested on a busy freeway. The trucks were just 50 feet apart from each other, with computers controlling the pedal functions on two of them. This indicates that serious efforts are being made to prove that autonomy can exist in self-driving trucks.

NVIDIA's technology can go a long way in enhancing autonomous trucks, as its DRIVE PX 2 platform is based on artificial intelligence and deep learning. The platform's deep neural networks allow the cameras and sensors on autonomous vehicles to process data in real time, which enables the vehicle to locate itself on a high-definition map and judge the path ahead.

This means that NVIDIA's self-driving platform teaches itself to drive using real-world inputs, so it stands to gain a lot from testing on both closed and open roads. What's more, the scalability of NVIDIA's DRIVE PX 2 platform means that it can be deployed in heavy vehicles using a multichip configuration, capable of processing more data per second and making quicker decisions.

NVIDIA's self-driving truck video makes it clear that it has made tangible progress with the technology in partnership with PACCAR, giving it a jump-start in this potentially fertile market.

Why self-driving trucks could be a big deal

Earlier this year, Amazon.com (AMZN 3.58%) was granted a patent for a technology allowing self-driving vehicles to communicate with each other. The e-commerce giant's plans for the patent are not yet clear, but gradual moves toward automating the delivery process provide a hint that Amazon might consider developing or deploying self-driving trucks.

Amazon needs to reduce outbound shipping costs, which have gone through the roof in recent years. The use of autonomous trucks to lower driver-related costs and improve fuel efficiency will provide a tool to curtail these expenses. In the past, Amazon has purchased truck trailers to exert greater control over its fulfillment process and expedite deliveries between warehouses. So, it won't be surprising if it considers buying PACCAR trucks powered by NVIDIA technology in the future.

This could be another catalyst

NVIDIA is definitely not the first mover in developing autonomous truck technology. Volvo (NASDAQOTH: VOLVY), for example, has taken big steps in this area by demonstrating that its self-driving trucks can drive in demanding areas such as underground mines. What's more, the Swedish automaker's self-driving trucks were involved in a European Union-backed cross-border platoon challenge last year, indicating that it is making tangible progress.

Volvo's moves are a boon for NVIDIA, as the company has been using the chipmaker's technology to power its self-driving ambitions. The DRIVE PX 2 platform is playing a mission-critical role in the automaker's autonomous-car project, so it won't be surprising if Volvo deploys the platform in its trucks.

Clearly, NVIDIA's hardware expertise has helped it strike partnerships with big names in heavy-duty trucks. Therefore, the acceptance of its self-driving platform by truck manufacturers such as Volvo and PACCAR could make this a happy hunting ground for the chipmaker.