Shares of Smart & Final Stores Inc (NYSE:SFS) fell on Thursday after the warehouse retailer took a large goodwill impairment charge and issued a disappointing outlook in its fourth-quarter report. As of 10:52 a.m. EDT, the stock was down 17.8%. 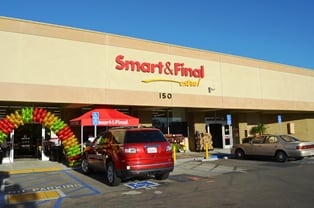 Smart & Final Stores said comparable sales increased 3.2%, driving overall revenue growth of 6.7% to $1.07 billion, which matched estimates. During the quarter the company took a $180 million goodwill impairment charge, equivalent to nearly half of the company's market cap, giving it a net loss of a $146.6 million. Adjusted for the goodwill impairment and other one-time charges, Smart & Final Stores posted earnings per share of $0.15, up from $0.07 a year ago, and ahead of estimates at $0.13.

CEO David Hirz said, "We are pleased with our strengthening comparable store sales trends, which represent the third consecutive quarter of comp growth. This reflects the success of our merchandising initiatives aimed at both household and business customers with an emphasis on our natural and organic, private label and club-size items."

Management said that it didn't believe that the impairment charge "reflects a fundamental change in the long-term attractiveness of future store investments." For the year ahead, Smart & Final Stores projected comparable-sales growth of 1%-2% and overall revenue growth of 4%-5%, which was below the analyst consensus of 5.3% growth. On the bottom line, management forecast earnings per share of $0.42-$0.47, which compares to $0.45 last year and analyst estimates at $0.54.

By even having comparable-sales growth Smart & Final Stores is doing better than many retailers, but the market is clearly disappointed with the flat earnings growth forecast. Stiff headwinds remain for much of the retail industry, including Smart & Final Stores.