Kratos Defense & Security Solutions (NASDAQ:KTOS) has the potential to be a real outlier in the normally stogy world of defense contracting, where companies tend to creep slowly along, but few rocket up overnight. Defense typically hasn't been an area where investors could hope for tech sector-like rapid appreciation, and outside of government IT contractors it is a business that has been downright inhospitable to newcomers and start-ups.

Kratos has the potential to be that rare exception. Though the company today is also a lot riskier than its defense peers, if its products end up doing what the company believes they will do, the stock has considerable room to grow. Kratos is not for the faint of heart, but the stock could prove to be a gold mine for growth-oriented investors. 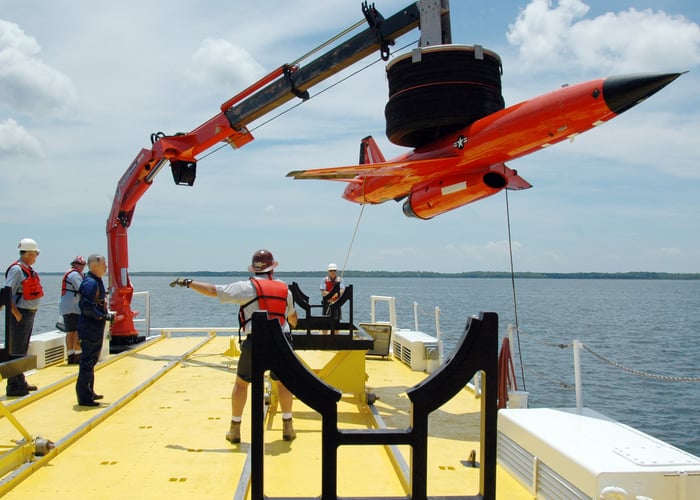 Kratos, a onetime wireless infrastructure vendor that pivoted to become a government contractor last decade, dabbles in satellite communications, microwave electronics, and training systems. But it is the company's unmanned systems business that has investors most excited.

The company is a specialist in manufacturing jet-powered drones fast enough to simulate missiles in test runs and that could one day fly as wingmen to combat aircraft. Kratos hopes to be front-and-center for the gradual transition by the Air Force away from relying solely on manned aircraft, envisioning future air battles where its drones would fly alongside manned jets to increase each manned-aircraft's total available firepower and acting as decoys to overwhelm and distract anti-aircraft missiles.

It also has exposure to other potentially lucrative projects, including as a subcontractor on the futuristic DARPA Gremlins program.

Kratos is fully focused on its defense business, in late February agreeing to sell some public safety and security assets for about $70 million in cash. The company is not yet profitable, but it reported fourth-quarter revenue of $202.2 million that exceeded expectations thanks to 65.9% year-over-year growth in its unmanned systems unit.

The company has started out 2018 with a flurry of contract wins, including a $23 million contract for aerial drones, and has said it expects to be breakeven or slightly profitable on an adjusted EBITDA basis by the end of the first quarter of 2018.

It's important to note that although Kratos has momentum, the company's ultimate vision is still some ways away from becoming reality. Kratos introduced the Valkyrie and Mako drone platforms it hopes to eventually sell to the Air Force for about $3 million apiece only last year. And the drones figure to face competition from offerings designed by a number of deeper-pocketed competitors, including Boeing and Northrop Grumman.

There has been progress since introduction -- Kratos in early March said it has received State Department approval to market the Mako to certain European and Asia Pacific allies -- but there are no guarantees the drones will function as planned or that they will win out over competitors.

Due to the added risk, Kratos is a bargain compared to larger defense primes. The company currently trades for about 1.3 times sales, less than Northrop (2.3 times), Boeing (2.15 times), or other contractors. Given the drawn-out nature of defense work, that gap will likely take some time to close. Yet with every quarter Kratos shows continued progress in the development of its high-tech drones, that discount seems likely to narrow.

It would be unfair to call Kratos a start-up or a development-stage company, given how far it has already come, but Kratos certainly offers defense investors a somewhat unique-for-the-industry chance to buy in early and hope for the best. A lot could still go wrong for Kratos. But if the drones deliver as promised, the Pentagon seems likely to order a significant amount of them, and in that case Kratos certainly would end up as a gold mine for growth investors.

Why Kratos Defense & Security Solutions, Inc. Could Be a Gold Mine for Growth Investors @themotleyfool #stocks $KTOS Next Article
Current