Does Disney's new structure address its streaming ambitions, the addition of Fox, and succession planning all in one fell swoop?

The Walt Disney Company (DIS -2.31%) has struggled over the past few years from the advent of streaming video, cord-cutting, and subscriber losses at its flagship ESPN sports network. Disney has, however, taken a number of steps to counter these emerging threats.

The company is planning the launch of two new streaming services. The first will be a companion service for ESPN subscribers that will be introduced this spring. The second, due to make its debut late in 2019, will serve as the streaming home for content from the company's Pixar, Lucasfilm, Marvel, and Disney film studios.

The pending acquisition of assets from Twenty-First Century Fox (FOX) (FOXA) was of strategic importance as well, providing Disney with a windfall of additional content, as well as a controlling stake in streaming service Hulu.

Now Disney is taking the next step. 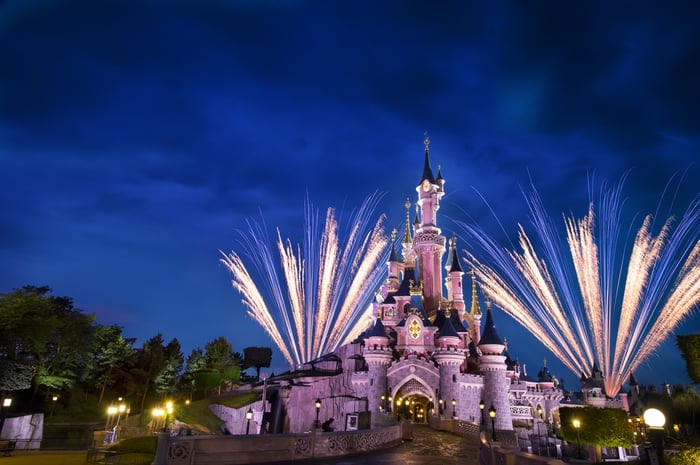 Disney is reorganizing to better position for the future. Image source: Disney.

Disney reported this week that it was conducting a strategic reorganization of its business that would take effect immediately and better position the company for future success.

The reshuffling will combine the parks and resorts and the consumer products segments, while adding a new direct-to-consumer and international segment. Several smaller businesses will also move between segments.

In a press release, Disney Chairman and CEO Bob Iger said the company is positioning itself for the future by "creating a more effective, global framework." He went on to say, "With our unparalleled Studio and Media Networks serving as content engines for the Company, we are combining the management of our direct-to-consumer distribution platforms, technology, and international operations to deliver the entertainment and sports content consumers around the world want most, with more choice, personalization, and convenience than ever before."

Disney's chief strategy officer, Kevin Mayer, will head up the direct-to-consumer and international business segment. Mayer, though not a household name, oversaw the Pixar, Marvel, and Lucasfilm acquisitions -- as well as the pending deal with Twenty-First Century Fox.

The newly created segment will serve as the "global, multiplatform media, technology, and distribution organization" for Disney's content. Having a single unit charged with controlling the worldwide distribution of programming will allow the company to better compete in an environment increasingly dominated by streaming.

This move seems designed to carve out a space for the company's upcoming streaming services, but there may be even more going on just below the surface. The restructuring comes in advance of the Fox acquisition, and anticipates the combination by placing responsibility for distribution of all the company's content assets under one roof.

In addition, both Mayer and Chapek have each headed multiple business segments at the entertainment empire, potentially setting them up to compete for Iger's job. Disney's chairman and CEO has extended his tenure and postponed his planned retirement three times, with a fourth extension conditional on Disney's successful acquisition of Fox.

This new organizational structure appears to anticipate the world of Disney as it will be in the near future and, in Iger's words, "to serve consumers worldwide, increase growth, and maximize shareholder value."