A growing number of companies are connecting things -- from bicycles to cars to parking meters -- to the Internet in an effort to automate services and collect data. These newly linked items are collectively known as the Internet of Things (or IoT), and by 2021, the consultancy International Data Corporation estimates that worldwide spending on IoT will reach $1.4 trillion.

Investors looking for ways to profit from this potentially huge opportunity have their pick of major technology companies that are dabbling in the space, but if you're interested in a small-cap stock that's in the middle of transitioning its focus from mobile to the IoT, take a good look at Skyworks Solutions (NASDAQ:SWKS). Here's why. 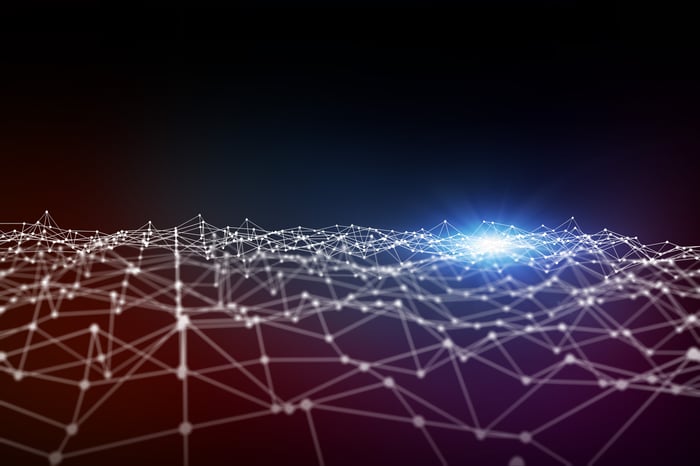 What Skyworks does, and why it's a great IoT play

I should say up front that Skyworks is primarily a mobile tech company right now. The analog semiconductor maker's connectivity chips are used heavily in smartphones -- most notably the iPhone. In fact, Apple is its biggest customer, accounting for about 40% of Skyworks' top line.

But Skyworks is ramping up sales of its hardware for a host of applications, in such things as smart speakers, connected vehicles for Hyundai, and smart-home lighting technology. Its non-mobile segment, which includes the Internet of Things, now provides 25% of total revenue, and management believes that the IoT will play an increasingly important role in the company's future.

On the company's first-quarter 2018 analyst call, CEO Liam Griffin said that Skyworks' tech saw "traction within the increasingly vibrant and profitable mobile and IoT ecosystems," and he believes the company's technologies and partnerships will help it maintain a leadership position in its space.

The potential for Skworks in IoT is significant because its chips can be used in so many different types of devices. For example, semi-autonomous and autonomous vehicles are two potentially huge markets. Griffin said on the call that "Automotive is becoming more and more critical for us."  It's natural he sees it that way -- the global autonomous vehicle market is forecast to be worth nearly $127 billion by 2027.

I should also point out that Skyworks provides LTE capabilities to Amazon's Alexa-based platforms (think Echo devices), connectivity for Google's new Home Max smart speakers, and Bluetooth for Nest's new home alarm system, all companies that are IoT leaders in their own rights.

The IoT could be a slow burn

Investors looking for a solid IoT play should strongly consider Skyworks. The company is small-cap mobile play that's morphing into an Internet of Things stock. But keep in mind that it could take a while before it earns the majority of its revenue from the IoT.

The company is still heavily reliant on Apple, which is both a blessing and curse for many components makers. But investors can expect it to reduce that dependence by further building out its IoT client list and getting its chips into an ever-greater number of devices. The precise shape of the company's future is still a bit hazy, but what's clear is that investors looking for a strong mobile components maker with its longer-term ambitions tied to the IoT have a good bet in Skyworks Solutions.

If You Love the Internet of Things, You Should Check Out Skyworks Solutions @themotleyfool #stocks $SWKS Next Article
Current