This could be a make-or-break year for Fitbit (NYSE:FIT), which is struggling against rising competition across the wearables market. The stock remains about 75% below its IPO price of $20, and analysts expect its revenue and earnings to drop 8% and 12%, respectively, in 2018.

However, the stock also looks cheap at just 0.4 times its enterprise value of about $580 million, and nearly 20% of the float was being shorted as of Mar. 9. Therefore, any positive news from Fitbit could drive the stock higher. Let's dig deeper into the company's two newest wearables, and find out whether they're enough to drive away the bears.

Fitbit recently introduced the new Versa smartwatch, a $200 device which the company calls the "lightest metal smartwatch in the US". The Versa features a four-day battery life, advanced health and fitness tracking features, a music player for downloaded and streamed music, and interchangeable straps. Like last year's Ionic smartwatch, the Versa can also access Fitbit's small (but growing) App Gallery. The company is also adding new female health tracking features for menstrual cycles and fertility windows to its app to complement the Versa's launch. 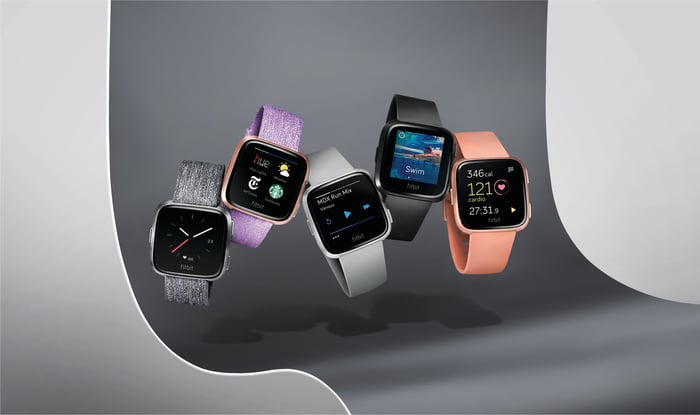 However, the device lacks a stand-alone GPS or cellular connectivity, and only the special edition includes an NFC chip for mobile payments via Fitbit Pay. The lack of those features keeps the price tag significantly lower than Apple's entry-level Apple Watch Series 3 offering, but it could be a deal-breaker for athletes who want to work out without a phone.

The Versa is technically Fitbit's fourth "watch". Its first was the Charge, which added a display to a larger fitness tracker. The second was the Blaze, which resembled a smartwatch but lacked the features of full-featured offerings.

Then came the Ionic, the company's first full-featured smartwatch, which targeted the Apple Watch Series 3. Unfortunately, tough competition from Apple caused the Ionic to miss sales expectations during last year's holiday quarter. As a result, Fitbit broadly missed its fourth quarter expectations and lost its crown as the world's top wearables maker to Apple.

In late February, Fitbit CEO James Park announced that Fitbit would launch a "mass appeal" successor to the Ionic. That device turned out to be the Versa, which arrived much earlier than expected. The Versa was met with positive, but it's unclear if the device can succeed where the Ionic failed.

A Fitbit for kids

Fitbit's second new device is the Ace, a fitness tracker for children. The $100 device, which is based on the Fitbit Alta, targets users aged 8 and up. The Ace has a five-day battery life, tracks daily activity and sleep patterns, and includes parental controls. 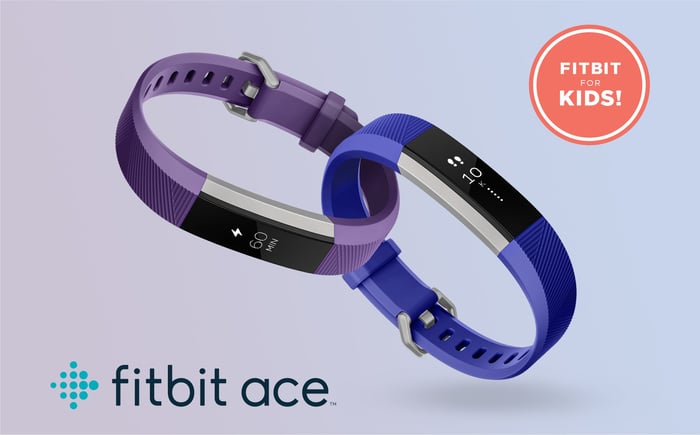 Parents can track their kids' progress on their own Fitbit app, award them with badges, and send messages to the Ace's screen. The Ace lacks a GPS, which was likely left out due to privacy concerns -- Garmin also left GPS trackers out of its Vivofit Jr. for children.

However, many kids' smartwatches on the market at the moment, including LG's GizmoPal 2, the FiLIP 2, and the HereO, do have GPS so parents can keep tabs on their kids.

The Ace might seem limited to a niche market, but Gartner forecasts that children's smartwatches could account for 30% of all smartwatch shipments by 2021. If the Ace is successful, it could offset Fitbit's softer sales of adult wearables and help it regain some market share against Apple.

Will the Versa and Ace move the needle?

The Versa is up against the same headwinds that tanked the Ionic. iPhone users will likely buy the Apple Watch first, since it's tethered to the company's services and apps. Meanwhile, Android users have a growing list of smartwatches to choose from, many of which offer features comparable to those of the Versa at similar (or lower) price points.

The Ace seems to have a better shot at making a mark since big players like Apple and Xiaomi-backed Huami aren't paying attention to the children's market yet.

All in all, the Versa and Ace are steps in the right direction, but I'm not convinced that they'll move the needle for Fitbit unless the company dramatically increases its marketing expenses. If that happens, its losses could widen in the short term and scare away the remaining bulls.

Will Fitbit's New Versa and Ace Drive Away the Bears? @themotleyfool #stocks $FIT Next Article
Current