BMW AG (OTC:BAMXF) launched its first battery-electric vehicle way back in 2013, and it has been working to advance the technology ever since. But its CEO said on Thursday that it won't begin mass-producing electric vehicles until 2020.

Why not? Because the technology still isn't profitable, and BMW isn't willing to sell those cars at a loss.

Why BMW is waiting to mass-produce electrics

BMW has made great strides in electric-vehicle technology since 2013. The latest electric BMW, the i8 Roadster sports car, uses what the company calls its "fourth-generation" technology: Better batteries give the new model about 40% more range than its predecessor. 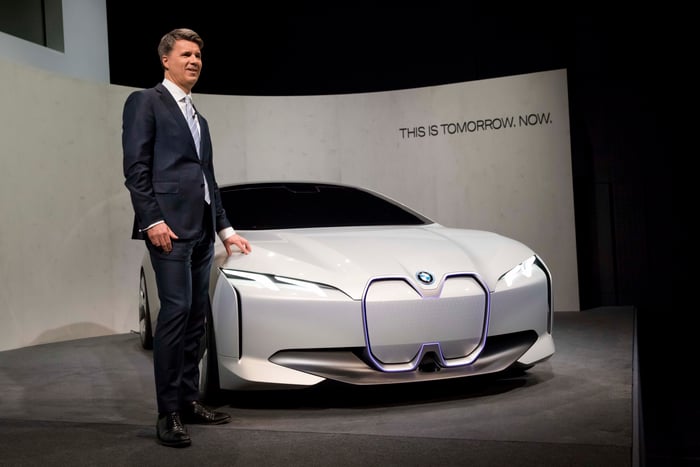 But CEO Harald Krueger told investors on Thursday that the leap that BMW made from its third-generation technology to the latest fourth-generation version wasn't enough to make it viable for mass production. It needs one more leap:

The cost advantage will be a "two-digit" percentage improvement, Krueger said. "It's not 5%. It's something which we believe is a major step forward."

Krueger feels that BMW needs to wait in order to have competitive costs. While larger rivals like Volkswagen AG (OTC:VWAGY) and General Motors (NYSE:GM) can afford to build electric vehicles at a loss in order to advance the technology and build a presence in the market, BMW is a smaller company. It needs to wait until it has a cost advantage to be competitive, he said:

If you would like to win the race and electrification is the future, you must be the most cost-competitive in that segment. Otherwise, you can't scale up the volume. And that's why we are doing so much intensive research on these things. There is a lot of material, cash, set of production in all these things, because you need to understand that in detail to take all the costs.

BMW is spending big money to win those cost advantages A year ago, Krueger said that BMW would fund that increased spending by rolling out more high-profit SUVs. That has begun: An all-new (internal-combustion) X3 was launched last year, new versions of the X2 and X4 crossovers are coming in 2018, and an all-new high-end X7 SUV is expected to arrive near the end of the year.

But CFO Nicolas Peter said that BMW still might need to charge a premium for that first battery-electric X3 in 2020:

The upshot: As usual, BMW is proceeding carefully

Since taking over as CEO, Krueger has been careful to balance BMW's need for advanced technology to stay competitive with a realistic view of the company's size and budget. Unlike its rivals Audi AG, which is owned by giant Volkswagen, and Mercedes-Benz, which can leverage parent Daimler's (OTC:DDAI.F) truck and bus businesses for added scale, BMW is on its own.

That means it needs to proceed carefully into the electrified, self-driving world. And that's why Krueger feels the need to wait until 2020 (or a bit later) to begin ramping up production of battery-electric vehicles.