The solar industry had a good year in 2017, but that doesn't mean all companies are reporting blowout earnings. Canadian Solar's (NASDAQ:CSIQ) fourth-quarter profit was driven by project sales, but the company expects margins to fall in 2018 as project margins fall and the competition for commodity solar panel sales heats up.

JinkoSolar's (NYSE:JKS) recently reported fourth quarter may be a warning to large solar manufacturers that profits could be hard to come by in 2018. Being one of the biggest solar manufacturers in the world won't guarantee success, and the market seems to be seeing that, pushing JinkoSolar's shares lower since the report came out. 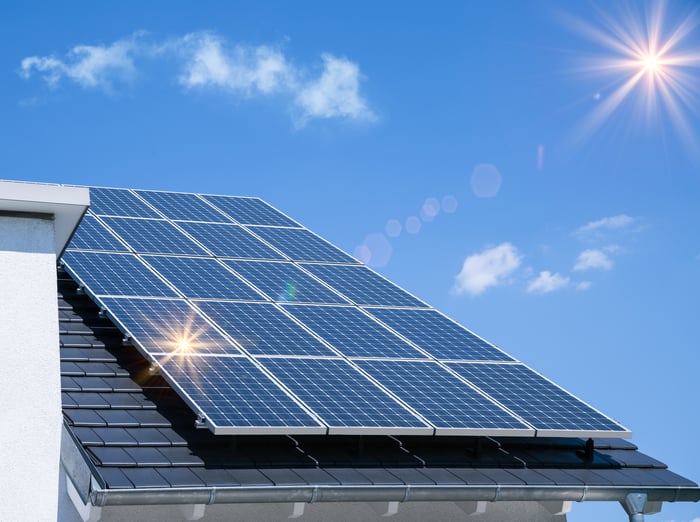 The low margins were driven by rising raw material costs and increased outsourcing. Both should reverse course in 2018, which is why management expects margins to improve this year. But the low margin level was enough to send a jolt of concern to investors when results were released.

How to reverse declining profits

One of the big trends in 2017 was the market shift toward higher-efficiency cells and modules. Multi-crystalline solar cells, which have dominated in the last decade, are giving way to mono-crystalline cells and PERC (passive emitter rear contact) cell construction. JinkoSolar is investing in these advancements and is planning to roll out more high-efficiency production in 2018. CEO Kangping Chen provided this overview of the company's progress:

During the quarter, we continued to optimize our mono wafer production costs and have made substantial progress in crystalizing, cutting and argon recycling during the mono wafer production process. We broke our own world record during the quarter when solar cell efficiency for our P-type mono-crystalline PERC cell hit 23.45%. We also made solid progress in developing N type Hydride Oxide Thin Film (HOT) technology, with an industry-leading 21.9% in average cell efficiency during mass production. With demand increasing, we also plan to expand our production capacity of bifacial cell plus bifacial duo glass modules.

Improving technology will be important for JinkoSolar, and all other solar manufacturers, in the long term. But right now, the fact that it's not leading in efficiency means the company is competing in a commodity market and getting low margins as a result.

JinkoSolar is one of the biggest solar manufacturers in the world, but it's barely making a profit even in a strong market. The lesson is that investors need to find companies with differentiation because scale isn't necessarily a value driver in the solar industry. Canadian Solar's differentiation is its project-development business, but even there we don't see a sustainable advantage, since margins are expected to fall in 2018.

Investors should watch to see whether technology improvements in the works drive better margins in 2018. I'd like to see proof that technology is going to drive better financials rather than speculate that a commodity supplier can be a high-efficiency supplier in the solar market.