IBM (NYSE:IBM) is in the middle of reinventing itself from a hardware company that sells servers to businesses, to a services company that provides platforms, analytics, and cloud computing to its customers. Sure, it still sells hardware, but IBM is continually looking ahead to a world where service revenue dominates its top line.

To that end, IBM recently made an announcement about a new artificial intelligence (AI) platform it's launching, called Cloud Private for Data. The name doesn't necessarily roll off the tongue, but IBM says that this new data science and machine learning platform will make it easier for its customers to make data-driven decisions.

"Designed to help companies uncover previously unobtainable insights from their data, the platform is also designed to enable users to build and exploit event-driven applications capable of analyzing the torrents of data from things like IoT sensors, online commerce, mobile devices, and more," the company said in a press release. 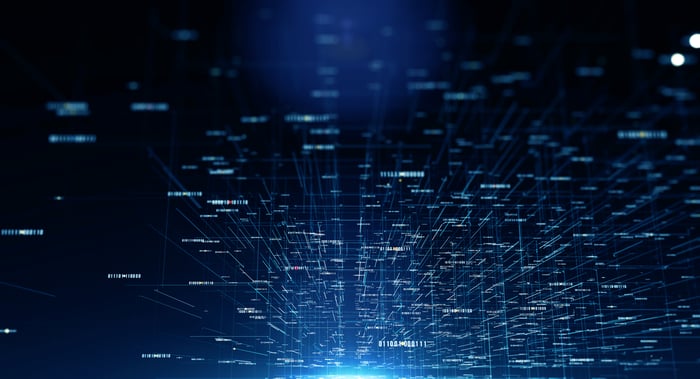 Cloud Private for Data is an application layer that helps companies gather the vast amounts of data they have, filter out what they really need, and then apply that data to machine learning and other AI projects.

In short, IBM is trying to be the answer to the question many Fortune 500 companies are asking: "How can we filter through all of the data we own and apply AI to make better decisions?" The company believes that its new platform could help its customers reach their AI and decision-making goals.

"Whether they are aware of it or not, every company is on a journey to AI as the ultimate driver of business transformation," IBM's general manager of analytics, Rob Thomas, said in the release.

Why IBM is focused on AI analytics platforms

It's no secret that up until very recently, IBM's sales were a huge disappointment to investors. The company had 22 consecutive quarters of revenue declines until its fourth quarter 2017 (reported in late January), where sales ticked up 3.7% year over year.

Part of the reversal has come from the company's movement away from its legacy hardware business and toward its recurring-services revenue. IBM now earns 61% of its top line from its as-a-service business. And the company recently noted in an investor presentation that its analytics, cognitive computing, cloud, and other "Strategic Imperatives" now make up 46% of the company's revenue, up from just 27% last year. All of this means that IBM knows that cloud computing, machine learning, and analytics are a big part of the company's future, and its new Cloud Private for Data platform is yet another step in that direction.

Worldwide spending on cognitive and AI systems is forecast to reach $57.6 billion in 2021, according to market intelligence firm IDC, with discrete manufacturing, process manufacturing, healthcare, retail, and the banking industries expected to account for 55% of all spending by 2021. It's no surprise, then, that IBM said its Cloud Private for Data platform will have industry-specific solutions for financial services, healthcare, and manufacturing in the near future.

It's still unclear how well IBM will be able to capture this growing cognitive computing market, but the company is certainly making progress by developing new platforms and solutions for its clients and by moving toward more recurring-services revenue. Whether investors will be patient enough to wait around for IBM's turnaround is another story. Shares are trading at just 11 times the company's forward earnings, but at least one famed billionaire investor, Warren Buffett, has already grown impatient with the tech giant's slow turnaround.