It's the same with investing. I think most investors have a better chance at long-term success by buying stocks of established, solid businesses or low-cost funds containing a wide variety of stocks. As in sports, though, sometimes going for the big play is a good idea.

I think there are some stocks that give investors a pretty good shot at scoring quickly in a big way. In my view, Align Technology (NASDAQ:ALGN), Editas Medicine (NASDAQ:EDIT), and NVIDIA (NASDAQ:NVDA) are three such stocks that could double your money within the next one to two years. 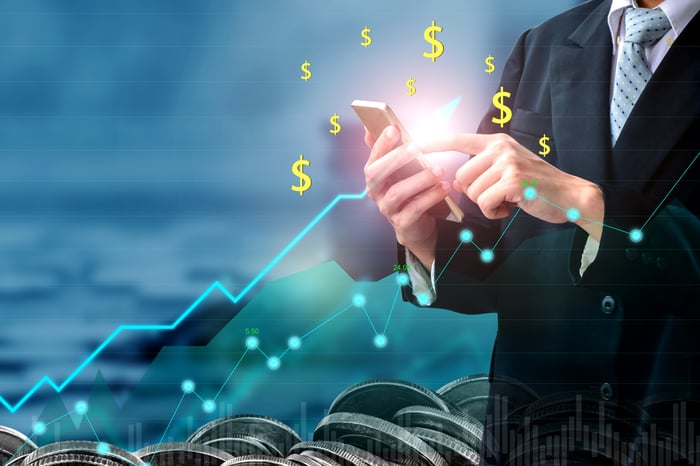 Double in a year? Align Technology's response could be "been there, done that." The orthodontic-focused medical-device company ranked as the best-performing S&P 500 stock of 2017, with shares soaring more than 130% last year.

I think Align Technology could double yet again over the next couple of years, for two major reasons. First, the company still claims a market share of only 11% of the current total available orthodontics market. Align's clear dental aligners are becoming increasingly popular as an alternative to wire-and-metal braces, but there's still a huge untapped opportunity.

Align appears to have a pretty good strategy for targeting this market. Much of the opportunity is outside the U.S., so Align has expanded its international operations. The company has also stepped up its marketing efforts to inform dental professionals and patients about its Invisalign clear aligners.

Second, while Align goes about capturing more of the current orthodontic market, the company is also working hard to expand that market. Currently, Invisalign can be applied to only 60% of cases of misalignment of teeth. Align believes that its technological advances could increase that number to around 85%.

Editas Medicine: Potential is in its DNA

Editas Medicine didn't double last year. But the gene-editing biotech came awfully close, with its stock gaining 89%. Editas is also setting a good pace in 2018, with shares climbing more than 20% year to date.

It's important to note that Editas isn't yet profitable and is years away from even having a product on the market. What's driving the stock higher is the potential of the CRISPR-Cas9 gene-editing approach that's Editas Medicine's specialty.

Editas is researching how to use CRISPR gene editing to treat several genetic diseases, including eye disorders Leber congenital amaurosis and Usher syndrome type 2a. Juno Therapeutics, which Celgene recently acquired, is also partnering with Editas on using gene editing of T-cells in treating cancer.

Other biotechs also have CRISPR-based development under way. The good news is that Editas should profit if any of them are successful. Why? Editas licenses patents claimed by the Broad Institute for use of CRISPR-Cas9 in humans. That means the company stands to receive royalties on any future therapies sold that use the gene-editing technique for treating humans. I think Editas stock could move higher as it and other biotechs advance pipeline candidates that use CRISPR-Cas9.

NVIDIA seems to be at the center of nearly every big technology trend. The company started out making graphics processing units (GPUs) for video games. That market has exploded, with professional services firm PwC projecting the global video game market to grow to more than $90 billion by 2020.

Along the way, companies focused on developing artificial-intelligence (AI) applications discovered that NVIDIA's GPUs were ideally suited for running those applications. That created a new market for NVIDIA, particularly for cloud data centers hosting AI software. Last year, AI-related sales made up 19% of NVIDIA's total revenue.

One use of AI that could be particularly important for NVIDIA's future is in self-driving-car technology. At the Consumer Electronics Show in January, NVIDIA announced four partnerships that will use the company's new DRIVE Xavier autonomous-machine processor. Three of those deals were with big players Volkswagen, Uber, and Baidu, while the fourth partnership was with a start-up that is itself teaming with major automakers.

NVIDIA stock has more than doubled over the past 12 months. It wouldn't surprise me at all for the stock to double again over the next one to two years. The global demand for video games, AI, cloud computing, and self-driving cars should continue to increase -- and NVIDIA is likely to remain at the center of each trend.

I think Align Technology, Editas Medicine, and NVIDIA could all double. The operative word in that statement, though, is "could." There's no guarantee that the stocks will perform as well over the next couple of years as they have in the past. Macroeconomic problems could weigh on all three stocks. Editas faces the greatest amount of risk, since it's the most speculative play of the three.

In my view, buying Align, Editas, and NVIDIA isn't quite as dramatic as swinging for the fence, trying for that three-pointer, and throwing the long pass. I like the long-term prospects for all three companies. But as is the case with the sports analogies, sometimes you don't score -- and then again, sometimes you do.