Robotic surgery might seem like futuristic technology, but the first generation of scalpel-wielding robots are already old enough to vote. While the industry trailblazer is still a top stock to buy in this space, a handful of interesting start-ups are finally carving out their own share of a growing market.

Should investors focus on the clear leader in this space, Intuitive Surgical, Inc. (NASDAQ:ISRG), or take a chance on a fledgling start-up?

To help you make that determination on your own, let's look at the top reasons to consider buying these stocks. 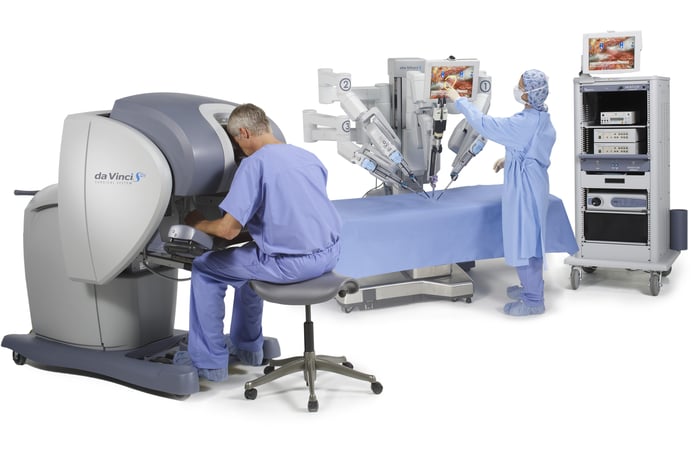 Sooner or later it's going to be hard to find a reputable hospital that doesn't already have one of Intuitive Surgical's da Vinci systems, but that hasn't dampened enthusiasm for the stock. Shares have been trading at a sky-high 44 times this year's earnings expectations.

Intuitive Surgical employs a "razor-and-blade" business model, with da Vinci systems acting as razors and the disposable instruments they hold as blades. Now that there are 4,400 "razors" installed in hospitals worldwide, the company makes most of its money selling "blades" designed to perform a growing number of procedures.

Rapid growth among more recently approved procedures is a key reason investors are willing to pay through the nose for Intuitive shares right now. With a diverse range of applications, an unexpected hit to one or two probably won't cause the company to stumble. For example, gynecological procedures have risen steadily in recent years, but as a proportion of total procedures performed, the segment fell from 60% in 2012 to just 39% of the total last year.

Although plenty of competitors would like a slice of Intuitive's pie, high switching costs make breaking into an established market nearly impossible. Hospitals are increasingly willing to invest millions into new da Vinci systems because it keeps getting easier to hire surgeons already trained to use them. During the last three months of 2017, Intuitive placed 216 da Vinci robots, a 33% increase over the previous year's period.

Of course, I'm not the first person to notice how quickly Intuitive is growing. The stock has been trading at a nosebleed-inducing 43 times forward earnings estimates. To beat the market with a stock purchase at this level, the company needs to maintain its current growth rate for many years to come. 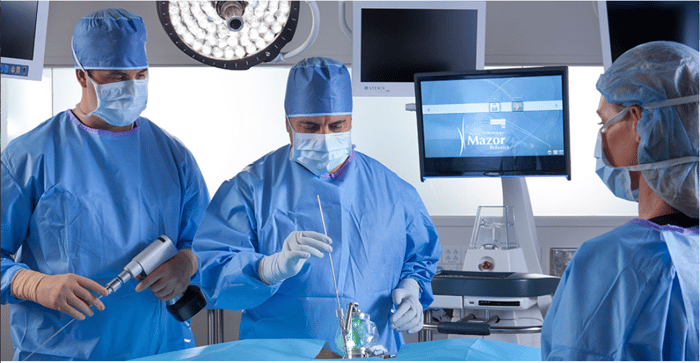 Luckily for Israeli company Mazor Robotics, spinal surgery is one area Intuitive hasn't sewn up yet. The company's launched its second system, called Mazor X, in 2016. The world's largest medical-device maker, Medtronic plc (NYSE:MDT), sells a lot of spinal repair devices, and the Mazor X can help install them with a level of precision that human hands just can't match.

Persuading hospitals to invest in a robotic surgical system would be an uphill battle for Mazor on its own, but the Medtronic tie-up changes everything. Hospital administrators already familiar with Medtronic's spinal repair devices would be more easily convinced by a sales rep from the same company than an Israeli surgical robot maker they've probably never heard of.

Mazor's also benefiting from a study that shows spinal repair implants placed by robotic systems are far less likely to result in complications that eventually cost hospitals a bundle.

With Medtronic doing the heavy lifting, Mazor's total operating expenses rose just 22% last year. Total revenue doubled to $65 million, which allowed the company to squeeze out a profit in the fourth quarter.

Mazor Robotics is just starting to generate a profit, so price-to-earnings ratios won't tell us much. At around 24.6 times trailing sales, the stock isn't a bargain, but it's certainly worth considering.

If you think the lead bibs you have to put on before an X-ray are uncomfortable, imagine performing surgery in one. Repetitive stress injuries from operating in heavy protective gear shorten far too many interventional radiology careers, and malignancies arising from all that radiation exposure ruin a lot of retirement plans.

Corindus Vascular Robotics might have the most enthusiastic group of intended end users across the healthcare spectrum. The CorPath GRX system allows radiologists to sit at a comfortable distance from the action.

Corindus isn't as far along as Mazor, but the ball is rolling. During the fourth quarter of 2017, the company placed six new CorPath systems, raising the total installed base to 33. Corindus also employs a razor-and-blade business model and shipped 455 of the cassettes that need to be replaced after each procedure.

In February, the FDA cleared the CorPath for use in peripheral vascular interventions, which will significantly increase the number of potential patients CorPath can perform. It's also the first system to receive FDA clearance for an automated robotic movement. Allowing surgeons to "navigate to a targeted lesion by automatically rotating the guidewire upon joystick retraction" isn't something you've seen in popular depictions of robots performing surgery on their own, but it's the first official step in that direction.

In the fourth quarter last year, Corindus lost $8 million after recording just $4.2 million in revenue. If system installations and procedure volume placements continue along their recent trajectory, this company's tiny $279 million market cap could swell several times over in a few short years. Proceeds from a less than terrific financing arrangement could provide enough liquidity to get the job done. Cautious investors will want to wait for at least one more positive quarterly report, but intrepid investors will want to consider buying this stock right now.

TransEnterix stock rocketed last fall after the company received U.S. clearance for its Senhance robotic system, which is the first to provide feedback that mimics what surgeons would feel if they were performing the surgery directly. Senhance's haptic feedback system is popular with surgeons who have used it, and its reusable instruments should be a hit with hospital purchasing departments. To top it off, its arms can be moved independently of each other to accommodate various operating room setups.

Although TransEnterix gave hospitals plenty of reasons to buy a Senhance, uptake has been dismal. Senhance had a European marketing approval and a different name when an Italian device maker sold it to TransEnterix for $99.8 million in 2015. In 2017, the company received revenue related to just four Senhance systems installed worldwide.

When Transenterix reported 2017 earnings in March, management proudly boasted of two Senhance sales so far in 2018. Baby steps in the right direction are encouraging, but cautious investors will want to wait for a few more confident strides before they even consider buying this robotic-surgery stock.