Starbucks (NASDAQ:SBUX) has become a major player in China by opening roughly one store each day. The country has grown into the coffee chain's second-largest and fastest-growing market with CEO Kevin Johnson expressing confidence that China will fundamentally change the company.

"Our business in China, has emerged as a growth driver that is rapidly moving us beyond our long-standing dependence on our U.S. business for needle-moving growth," he said in the chain's first-quarter earnings call. "Today, we have two powerful, independent but complementary engines driving Starbucks' global growth with a long-term opportunity clearly visible in China." 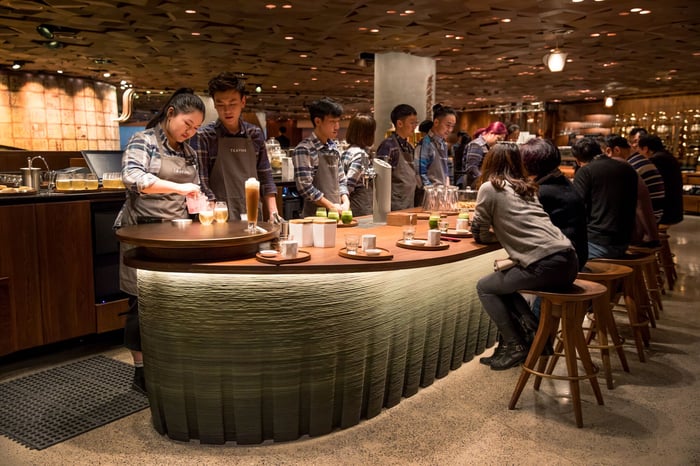 Starbucks has opened a Roastery in Shanghai. Image source: Starbucks.

Starbucks has largely hit a saturation point in the U.S. when it comes to opening new stores. That does not mean it has stopped growing it its home market -- premium will offer added sales opportunities -- but that's a tougher path than adding stores in a country with a fast-growing middle class.

"In 2014, China's GDP totaled $11 trillion and many economists expected to exceed $15 trillion by 2021," Johnson explained. "Rapid GDP growth is fueling a massive increase in China's middle class, expected to reach 600 million consumers by 2021, up 100% from three years ago and almost twice the size of the total U.S. population."

Essentially, the CEO sees the ability to scale its current model for the Chinese market by adding locations. He expects that at some point, the chain will have more locations across China than it does in the U.S.

"From an investment thesis, we have best in class unit economics, decades of white space to grow in both physical and digital retail, the most trusted brick and mortar brand in the market, and a world-class management team," he said.

Premium will play a part

In China, Starbucks can capitalize what it has already accomplished in its home market. That means it can roll out its premium Roastery and Reserve brands as it penetrates the country. The coffee chain has already opened a Roastery location in Shanghai, its second after the one in Seattle, and Johnson considers that one of the company's "crowning" achievements.

"Customers, in some cases, are lined up for hours to enter the Roastery and be taken on an immersive, multi-sensory coffee, food, and tea journey," he said.

On its very first day of operation, the Shanghai Roastery became the highest grossing Starbucks store in the world, averaging more than double the number of transactions of our highly successful Seattle Roastery and with an average ticket of $29.

The chain expects to serve over 1 million customers a year at the Shanghai Roastery.

"Starbucks has cracked the code on China and no western consumer brand is better positioned than Starbucks in China," said Johnson. "You have to experience our business in China for yourself to fully appreciate it, but we are much more than simply a coffee retailer, as our world-leading financial and operating performance attests."

Those are bold statements, but Starbucks has shown that it understands the culture and can succeed in a market that has befuddled many American companies. At some point, the coffee chain will reach a saturation point in China and need to evolve in order to keep sales growing. However, that day is years away, and Starbucks should produce steady growth in its No. 2, eventually No. 1, market for a long time with its current plan.