If investing were purely a backward-looking endeavor, General Mills' (NYSE:GIS) stock would have risen after the company reported third-quarter earnings. The packaged-foods giant beat expectations on both the top and bottom lines by posting revenue of $3.88 billion and adjusted earnings per share of $0.79 versus analyst consensus of $3.78 billion and $0.78, respectively.

Unfortunately, it is not. Shares of the company sold off harshly due to forward guidance. General Mills now expects 2018 adjusted earnings to grow 1% versus its prior forecast of 3% to 4%. The stock quickly fell 10% from its close before the announcement. Is this an opportunity for income-hungry value investors to pick up a 4%-plus yielder, or should you leave General Mills on the shelf? 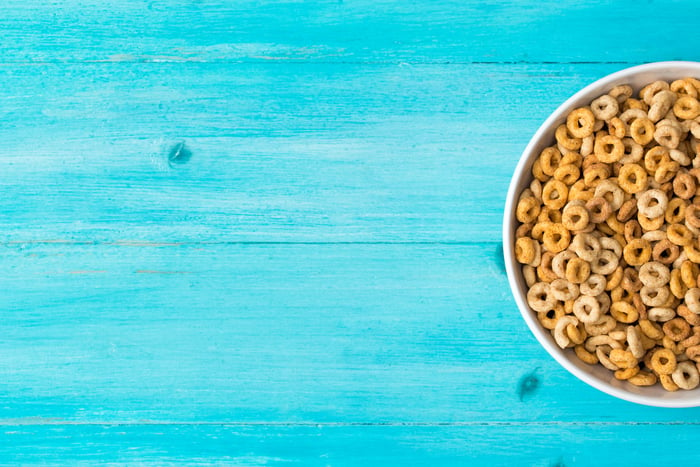 Its dividend is safe, but that may not matter to the market

For income investors, let me be clear: General Mills' dividend is not at risk. Over the last eight quarters, the median dividend payout is 53.5% of free cash flow, a coverage ratio even the most conservative analysts would consider safe. Only in one quarter did the payout exceed free cash flow, and that was mostly because of a change in accruals and income taxes payable, both of which are transient, one-time adjustments.

While General Mills' dividend looks solid, dividend income may become less important going forward. After years of rock-bottom rates, the Federal Reserve has become more hawkish, raising the federal funds target-rate range five times since late 2015. It is widely expected the Fed will increase the federal funds rate three times this year by a quarter-point each time, to a range of 2% to 2.25%, with the first raise occurring the same day General Mills announced earnings.

General Mills' reasons for the lower profit warning -– higher freight and commodity costs -- are concerning. General Mills is admitting it's facing inflationary costs that it cannot pass along to consumers. At its essence, running a business is balancing stakeholder concerns and requirements alongside your desire to produce profits.

General Mills appears to be losing bargaining power with two key stakeholders: first, its suppliers -- notably, the freight companies and commodity producers it can no longer negotiate lower prices from; and second (and more important), the end consumer, whom it cannot pass these increased costs along to. The latter admission squares with the belief among analysts that millennials -- a demographic growing in economic importance -- are eating less cereal and other packaged foods. Given the nature of food habits, it's likely this shift will continue and exacerbate in the years to come.

The upshot: General Mills will continue to pay its dividend for the foreseeable future, but that fact will be less rewarded by the market as substitute income assets become more attractive. Additionally, the company will struggle to grow its bottom line and cash flow in the years to come amid a shift in consumer behavior and continued inflation in supplier costs. It's likely investors can find high-yielding companies with more-compelling market positioning, and I'd stay clear of the name.

Should You Buy This High-Yielding Company After the Plunge? @themotleyfool #stocks $GIS Next Article
Current