It's been a wild few months for Wynn Resorts Ltd. (NASDAQ:WYNN). The saga started in late January, when co-founder and then-CEO Steve Wynn was accused of a "pattern of sexual misconduct" that the casino mogul denied. Meanwhile, Wynn Resorts shares responded to the allegations by losing 18.5% in just two days.

The tumult seemed to come to an end two months later when Wynn sold his 12% stake in the company that was named for him, while Galaxy Entertainment Group simultaneously acquired a 4.9% stake in Wynn Resorts. Two other long-term institutional investors acquired the remainder of Wynn's share of the company. The stock still is trading at a more than 10% discount to its price before the scandal, and there are a few reasons why Wynn looks like a buy today. 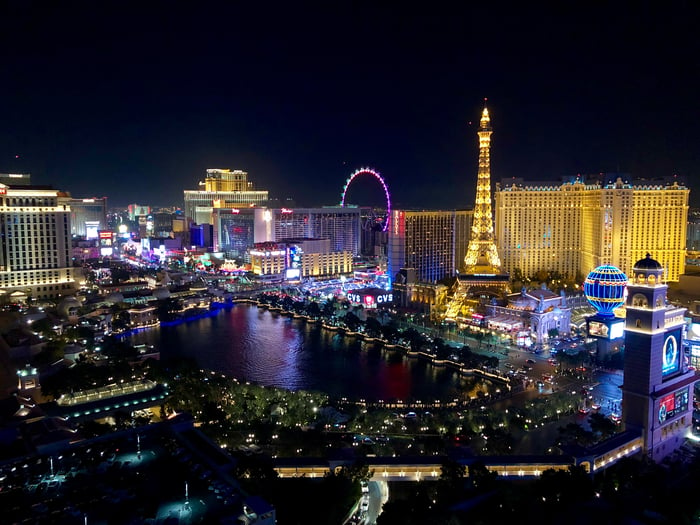 While Steve Wynn's demise was seen as a negative for the company, as he built the casino chain and became one of the most powerful men in the industry and Las Vegas, his departure opens the possibility for the company to be acquired. Selling the company could help eliminate any overhang to the brand from the scandal. As one of the world's biggest casino operators, Wynn would make an attractive target for a number of companies.

Most importantly, Wynn is one of just six companies to hold a gaming license in Macau, the Chinese territory that's the world's most valuable gaming market. Galaxy is already the biggest operator in Macau, and taking a stake in Wynn could be a prelude to acquiring Wynn Macau. Alternatively, the company would be a prize for a casino company angling for a position in Macau, like Malaysian operator Genting, which has long wanted the right to operate in Macau but has been unable to get a license. Potential bids from these or other buyers could start coming in at any time now.

2. The price is nice

Following the recent sell-off and a strong fourth-quarter earnings report, Wynn trades at a forward EV/EBITDA ratio of just 12.3. Analysts also see adjusted earnings jumping by nearly 70% over the next two years, from $5.46 to $9.22 per share, as the company has a number of projects in development. Those include expanding Wynn Las Vegas and adding a convention center. Wynn Boston Harbor is on track to open in mid-2019 and is expected to deliver an estimated $400 million in annual EBITDA on project construction costs of $2.4 billion.

Finally, the company has another resort planned for Macau, though it's only in the design phase at the moment. Losing Steve Wynn could put Wynn Resorts' Macau license, which expires in 2022, in jeopardy. However, the former CEO's decision to step down from the company appears to have removed the cloud of the scandal, as Macau regulators take casino operators' reputations into account.

The decision over the Macau license is still four years away. In the meantime, Wynn's near-term growth vehicles with Boston Harbor and Las Vegas seem locked in, and the possibility for an acquisition should put a floor on the stock price and could lead to considerable upside potential if one or more bidders emerge.

Steve Wynn's exit will leave a cloud of uncertainty over the company, but with the global economy strong and gambling receipts in Macau again, the macroeconomic climate favors Wynn Resorts. The price of $175 a share was right for Galaxy and two another unnamed investors. For individual investors, it could be a good entry point, as well. The stock's recent sell-off, growth projects, and appeal to an acquirer make it primed to outperform the market.