It's rumored that Amazon.com (NASDAQ:AMZN) is looking to occupy the vacant stores of bankrupt Toys R Us. Having played a large role in the toy retailer's demise, Amazon now wants to acquire its skeletal remains to expand its own brick-and-mortar footprint.

Bloomberg reports that as Toys R Us closes all 700 of its U.S. locations, Amazon plans to buy some of them to open its own stores, possibly for the purpose of showcasing its Alexa-enabled artificial intelligence platform. 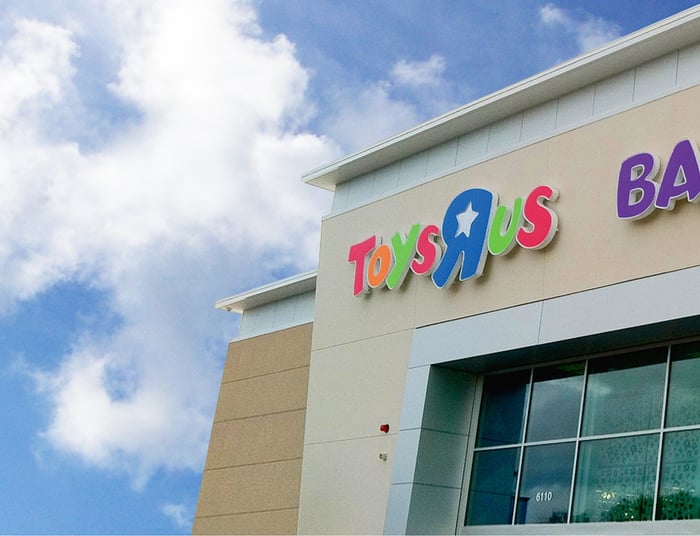 Could Amazon be on its way? Image source: Toys R Us.

Amazon has been rapidly expanding its physical presence since its purchase last summer of Whole Foods Market. In addition to the 450 stores it acquired in the purchase, it has also set its sights on opening hundreds of bookstores, and has launched the first Amazon-branded grocery store.

Recently, it announced it also wanted the Whole Foods locations to serve double duty as pickup spots for merchandise that Prime customers ordered online, not only for Amazon products but from third-party retailers, too. It is easy to see the old Toys R Us stores serving in that capacity as well.

Amazon has been mulling over how best to close the last-mile gap between its website and its customers. Much of its attention has been spent on developing a robust transportation and logistics operation, including leasing a fleet of airplanes, building an airport hub in Kentucky, opening hundreds of distribution centers, and launching a new Shipping With Amazon service that ships packages from businesses to customers. It is even reported to be considering buying trucking and logistics specialist XPO Logistics to add to its fleet of trucks.

Having Amazon-branded stores, however, could put it on Main Street right where its customers live and work. The Toys R Us locations might fit the bill, particularly since many typical tenants that would otherwise be interested in the space already occupy nearby stores.

A Deutsche Bank analysis of more than 120 Toys R Us stores finds at least 26 of them could be deemed "worthless." These were locations backed by a $512 million bond in 2016 and were valued at $618 million at the time, but are currently seen as being worth about a third less.

That's partly because tenants like Dick's Sporting Goods or Michaels, which would typically be considered potential buyers of the properties, already occupy space in the same shopping mall as Toys R Us. That could be an especially good opportunity for Amazon, which could step in and pick up such stores cheaply, even if they're otherwise in decent locations.

Typical Toys R Us stores tend to be 35,000 to 40,000 square feet, which might limit their appeal unless they were subdivided. But some Toys R Us stores are considered prime real estate; it's just that many retailers are facing their own footprint issues at the moment.

However, Isaac Larian, the owner of privately held toymaker MGA Entertainment -- which owns the Bratz doll and Little Tykes brands, both of which rely on Toys R Us as a major outlet -- is said to be leading a coalition of investors trying to raise cash to salvage half the toy stores. Some $200 million has been personally pledged by a group of investors led by Larian, with a GoFundMe campaign launched to raise an additional $800 million. Larian would like to save the Toys R Us brand, not just circle the toy store's carcass like a carrion-eating bird.

Amazon.com has ruthlessly battled brick-and-mortar stores for sales, whether it's for toys, groceries, or books. Many retailers have been driven to the brink, or indeed pushed over the precipice, as a result. But the e-commerce king has pursued this brick-and-mortar avenue before and took no action. It reportedly looked into buying RadioShack stores as the electronics retailer declined, but ultimately did nothing.

This time might be different, though, considering Amazon seems serious about its own brand of stores. It might be a bit ironic if they ended up being built on the remains of its competitors.