Could Novavax, Inc. (NASDAQ:NVAX) be a better vaccine stock than Merck (NYSE:MRK)? I think so.

That might sound crazy. After all, Novavax is tiny and unproven. It's losing millions of dollars every quarter. Meanwhile, Merck is an established big pharma company that makes more money from just one of its vaccines than Novavax's entire market cap.

But Novavax truly could be a better vaccine stock than Merck. Here's why. 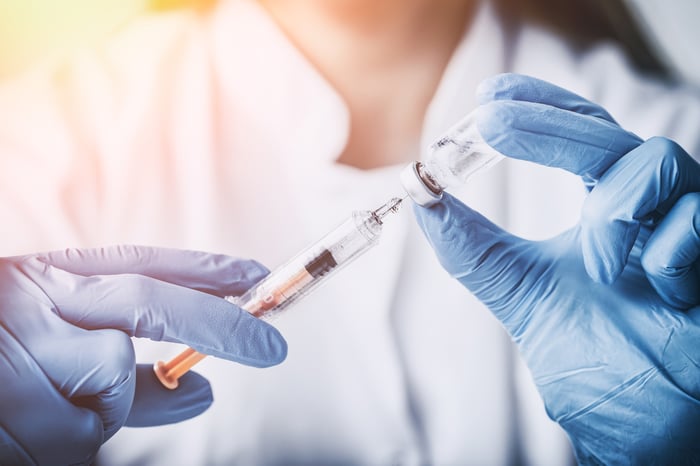 Merck is more than just a vaccine stock, of course. The company's top-selling products are diabetes drugs Januvia and Janumet and cancer drug Keytruda. However, vaccines are certainly important to Merck's success.

Last year, Merck's top vaccines combined to generate revenue of more than $4.8 billion. The biggest in terms of sales was the company's Gardasil and Gardasil 9 human papillomavirus vaccines. Merck's vaccine with the fastest sales growth, though, was pneumococcal vaccine Pneumovax 23. The company also markets other successful vaccines, including ProQuad, a pediatric combination vaccine to help protect against measles, mumps, rubella, and varicella.

On top of its already-approved vaccines, Merck claims two late-stage experimental vaccines in its pipeline. Pediatric hexavalent combo vaccine V419, which was developed to help protect against diphtheria, tetanus, pertussis (whooping cough), polio, invasive disease caused by haemophilus influenzae type b, and hepatitis B, is already on the market in Europe. Merck and partner Sanofi (NASDAQ:SNY) are working to provide additional data to the FDA after receiving a complete response letter for the vaccine in 2015.

Merck licensed Ebola vaccine from Newlink Genetics in 2014. The company has studies of the vaccine under way and expects to file for regulatory approval in the first half of this year. Technically, Merck also has another late-stage vaccine, inactivated varicella zoster virus vaccine V212. However, the primary endpoints of a late-stage study of the vaccine weren't met, so development of V212 has been put on hold.

Meanwhile, Novavax has no approved products on the market. But it does have one late-stage candidate, a respiratory syncytial virus fusion (RSV F) protein nanoparticle vaccine. Novavax expects to report results from an interim analysis of a phase 3 study of the vaccine for maternal immunization of infants by early 2019.

It's easy to identify the advantages that Merck has over Novavax. Merck is much more financially stable. It has a long history of success. The company definitely has its challenges with declining sales for several top drugs, but Merck should still be able to generate modest earnings growth over the next few years. And the drugmaker pays a dividend yielding north of 3.5%.

But Novavax also claims an advantage over Merck -- and it's one worth considering. It would take a near miracle for Merck stock to increase by 50% or more over the next year. I'd put the odds at less than 5%. But not only is this kind of jump a real possibility for Novavax, Wall Street analysts expect that it will happen.

The average one-year price target among seven Wall Street analysts covering Novavax who were surveyed by Thomson Reuters reflects a premium of more than 81% higher than Novavax's current share price. The most optimistic analyst thinks the biotech stock could nearly quintuple its current value, while the most pessimistic analyst projects the stock will drop by nearly 30%.

Why are expectations so positive overall for Novavax? It could be that many think the company will be successful with its phase 3 study of the RSV F vaccine in maternal immunization of infants. In Novavax's phase 2 study, there was a significant increase in antibodies to RSV in immunized women and their newborn babies than were present in those in the placebo group. In December, Novavax announced that an "informational analysis" indicated an observed vaccine efficacy of at least 45%.

If Novavax's phase 3 study of its RSV F vaccine in maternal immunization of infants does deliver positive results, the company could file for regulatory approval by late 2019 or early 2020. Novavax projects peak U.S. sales for the vaccine at around $750 million, with roughly the same potential in markets outside the United States.

And while it's still early, the biotech's NanoFlu vaccine could also have blockbuster potential. Sales for current flu vaccines in the U.S. and six other developed nations exceeds $3 billion annually.

So back to the premise that Novavax could be a better vaccine stock than Merck. The probability that a late-stage vaccine could win approval is around 74%, according to data from the biopharmaceutical industry trade group Biotechnology Innovation Organization. If we multiply that chance of success by the potential annual sales for the RSV F vaccine, the result is roughly $1.1 billion in risk-adjusted peak sales. Novavax currently trades for less than half of that amount.

My hunch is that if the RSV F vaccine succeeds in the phase 3 study or if NanoFlu shows promise in later studies, Novavax won't see those nice annual sales. That's because I think the company would be acquired before the products made it to market. We've already seen Novavax stock fly higher earlier this year partially on speculation that the company could be an acquisition target.

I think Novavax could be the better vaccine stock -- with a critical caveat. The biotech stock is only a fit for growth-oriented investors who aren't averse to taking on significant risk. Remember, even using the probably of winning approval from the BIO analysis, there's still more than a 1-in-4 chance that the RSV F vaccine won't get to the commercialization stage. The odds are much worse for NanoFlu.

If you're an investor who isn't at a point where you're comfortable taking on risk (for example, if you're a retiree), Novavax probably isn't the stock for you. There are less volatile alternatives that would be a better fit. But if you're willing to take on risk, buying a small position in Novavax could pay off in a big way.