Novavax shined in January, but February may be even better for this small-cap biotech stock.

The catalyst? The biotech's shares are apparently benefiting from the news that the current cohort of FDA-approved flu vaccines from GlaxoSmithKline (GSK -0.80%) and Sanofi (SNY -0.88%) have largely failed to curtail the ongoing epidemic. The Centers for Disease Control, after all, recently deemed this season to be one of the most severe, and deadly, in over a decade. 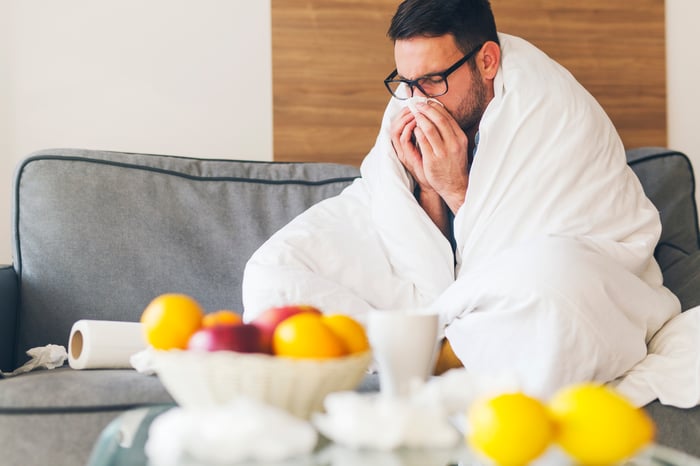 Novavax is on track to release early-stage data for its flu vaccine candidate, NanoFlu, this month. These preliminary data are unlikely to be enough to warrant an accelerated approval from regulators, but they may spark a buyout offer from the current market share leaders Glaxo and Sanofi.

It's no secret that Sanofi is on an acquisition binge right now. The French drugmaker, after all, needs to find new sources of revenue to push beyond the patent expiration of its flagship diabetes product, Lantus.

In the same breath, Glaxo is also reportedly gearing up to start making acquisitions of its own in an effort to return to modest levels of top-line growth sometime in the near future. As such, Sanofi and Glaxo appear to be logical suitors for Novavax in the event that NanoFlu proves to be efficacious and safe in human beings. These two top drugmakers have robust vaccine portfolios that would dovetail nicely with Novavax's current clinical lineup.

That being said, the current buyout speculation surrounding Novavax is simply not a good reason to buy its stock. A buyout may happen soon. But the more likely scenario is for potential suitors to wait until NanoFlu has proved its worth in a pivotal-stage trial. Therefore, investors should arguably base their buy -- or sell -- decisions solely on Novavax's prospects in the clinic. Everything else will take care of itself, after all.