Investors in RH (NYSE:RH) have waited a long time to see whether the home furnishings retailer would successfully overcome the huge challenges that it has faced in recent years. With the painful memories of 2016 still sharp in shareholders' minds, the much-better performance that RH achieved during the first parts of 2017 was encouraging but still left some market watchers skeptical about whether the company would be able to sustain its recent success through the key holiday season.

Coming into Tuesday's fiscal fourth-quarter financial report, RH investors were counting on the company to prove the skeptics wrong, and the home-furnishings specialist provided strong results to show that its momentum remained intact. Let's look more closely at RH to see what its most recent report says about what to expect in the new fiscal year. 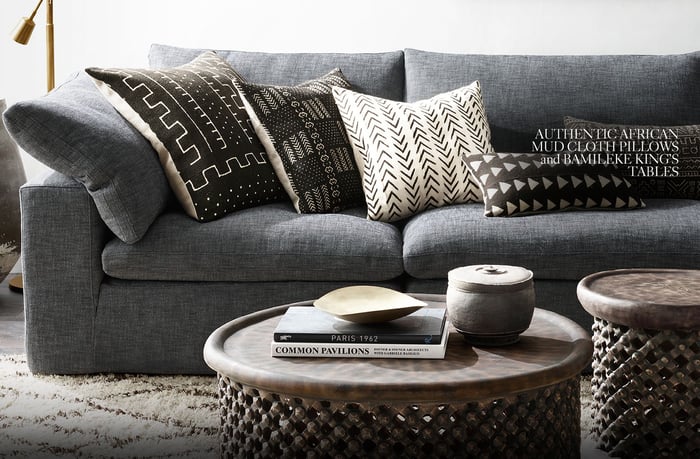 Restoration Hardware's fiscal fourth-quarter results were good enough to sustain its recent upward trajectory. Revenue was higher by 14% to $670.3 million, showing solid sales gains that marked a strong holiday period. Adjusted net income jumped 55% to $43.3 million, and the resulting adjusted earnings of $1.69 per share were almost 150% higher than they were in the year-earlier quarter and easily topped the consensus forecast among those following the stock.

Tax reform had a minimal impact on RH's results. The company said that it estimates a total hit of about $7 million from the new tax laws, with $6 million coming from revaluation of deferred tax assets and about $1 million from deemed repatriation of foreign earnings.

RH saw mixed results in its fundamental metrics. Growth in comparable brand revenue slowed to just 2%, but the company grew store net revenue by 18% from year-ago levels. Direct revenue was also higher, with a 10% rise showing the contribution that catalog and e-commerce played for the high-end home furnishings retailer and reflecting accelerated gains from the fiscal third quarter.

RH also continued to contract its store network to focus on its best opportunities. The company opened a new design gallery in West Palm Beach that replaced a legacy gallery store as well as a baby and child-oriented location. That brought RH's total number of stores to 83, with 981,000 square feet of selling space.

Can RH keep picking up speed?

CEO Gary Friedman went to great lengths to explain the company's trajectory. In 2017, as the CEO described it, RH focused on "execution, architecture, and cash," with the goal of implementing and executing its new membership model effectively. Moves to reduce inventory and capital spending while boosting cash flow were largely successful, and the new Toronto and West Palm locations featured integrated cafes, wine vaults, and barista bars. Making these amenities available to customers did a good job of reinforcing RH's brand image, and the CEO sees 2018 as a continuation of RH's efforts to keep polishing its new look and rolling it out to further populations.

RH's guidance shows a somewhat slower pace of growth, but the company has long-term hopes to accelerate gains in revenue in 2019 and beyond. For the full 2018 fiscal year, RH sees net revenue of $2.53 billion to $2.57 billion, which would represent gains of 5% to 7% on a comparable basis. Adjusted earnings per share are expected to come in between $5.45 and $6.20 per share, with reduced capital expenditures and merchandise inventories showing the progress the company has made. For the fiscal first quarter, RH sees revenue of $555 million to $565 million and adjusted earnings of $0.95 to $1.05 per share.

RH investors were ecstatic about the results, and the stock jumped 15% in after-hours trading following the announcement. With a successful holiday season behind it, RH now finds itself in the best position it's enjoyed in a long time and hopes to keep generating more success this year and beyond.