Toys R Us is going out of business, liquidating its inventory, and planning to sell its 800 storefronts in the U.S. and U.K. In a fiercely competitive retail industry with one-stop shops like Walmart (NYSE:WMT), Target (NYSE:TGT), and Amazon (NASDAQ:AMZN), Toys R Us couldn't keep up. In fact, it says those three are to blame for its decision earlier this month to completely shut down the business, after the bigger retailers ruthlessly slashed toy prices at their stores during the holiday season.

Of course, that was a strategic move by those three, as each stands to gain when one of the largest toy stores in the country shuts down and abandons its storefronts. 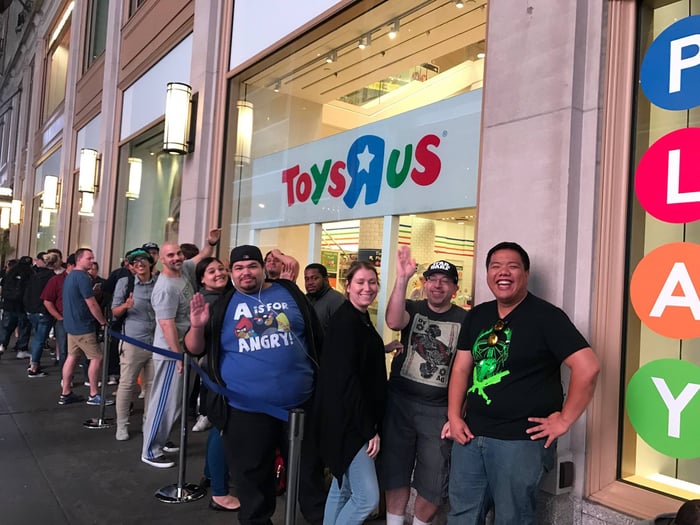 Target could take all the traffic

Target has a disproportionate number of stores located near Toys R Us locations. According to Credit Suisse analyst Seth Sigman, 90% of Toys R Us stores and 96% of Babies R Us stores have a target located within five miles. He notes that that could put pressure on Target's sales through the first half of the year, as shoppers flock to Toys R Us for the liquidation sales. Long term, however, Target stands to win a lot of foot traffic in those areas.

Target's store traffic growth accelerated last year, increasing 3.2% in the fourth quarter. That traffic increase barely offset the decrease in average ticket for the full year, however, resulting in same-store sales growth through its stores channel of just 0.1%. Target stores still have work to do to turn things around, but the exit of Toys R Us will help.

Walmart has more than twice as many stores as Target in the U.S., so it's a bit surprising that it doesn't have more stores near Toys R Us locations. That said, 82% of Toys R Us locations have both a Target and a Walmart nearby, according to Sigman's research.

Walmart is already the nation's largest toy retailer, capturing nearly 30% of the market. It makes deals with manufacturers for exclusive toys just like Toys R Us, and it could be in line to win more exclusives once Toys R Us is gone.

If Walmart can use its buying power to grab more exclusives, it could entice shoppers to drive past Target to get to Walmart for those must-have toys. But Walmart is so big, the sales volume from Toys R Us would barely move the needle for the retail giant.

Amazon could benefit more than either

Toy shopping is often an experience. Kids want to go to the toy store and play with all the toys before deciding what they want to take home. Nonetheless, online retail has been able to steal away a good percentage of sales. There's no reason to expect that trend to change, and Amazon will be its biggest beneficiary.

But Amazon also stands to benefit from the real estate opportunity presented by the liquidation of Toys R Us, which owned 274 of its U.S. stores as of the end of 2017. Amazon may grab dozens of locations to expand its brick-and-mortar efforts.

The average Toys R Us store is nearly the same size as the average Whole Foods Market, which means Amazon could expand the grocery chain using old Toys R Us locations. The toy chain also operates smaller-format stores, which could lend themselves to use by Amazon's brick-and-mortar bookstores or its Amazon Go convenience-store concept.

If Amazon buys up some physical storefronts, it could become an even bigger threat to Walmart and Target. Not only would its physical presence potentially draw customers away from the big-box stores, it would also likely beef up the convenience of its online offerings like Prime Now same-day delivery.

Target, Walmart, and Amazon might have squeezed their margins in the fourth quarter, but they'll ultimately reap rewards from the downfall of Toys R Us. Target and Walmart stand to benefit from higher foot traffic at their stores, and Amazon could take advantage of the real estate opportunity that will soon become available.

Who Wins When Toys R Us Closes Its Doors for Good? @themotleyfool #stocks $WMT $AMZN $TGT Next Article
Current