Carnival Corp. (NYSE:CCL) recently turned in an extremely healthy earnings report covering the first quarter of its 2018 fiscal year (the three months ended Feb. 28). The cruise line achieved a revenue increase of 11.6% over the prior-year quarter, to $4.2 billion, while posting record first-quarter net income of $391 million. As my Foolish colleague Rick Munarriz pointed out, this was Carnival's "strongest quarter in years."

To obtain some perspective on Carnival's current prospects and outlook, let's review three key observations made by management during the company's earnings conference call with analysts on March 22.

"Wave season" in the cruise industry refers to the first three months of the year, when travelers plan vacations for the warmer months, and travel operators and cruise lines consequently book a substantial amount of cabin capacity. Carnival, like its competitors, has benefited from an improving economy, but it's also invested heavily in sales and marketing to improve its annual bookings. In the first quarters of both fiscal 2018 and 2017, Carnival's selling and administrative expense as a function of passenger ticket revenue reached 19.5%.

Higher bookings, coupled with optimized sales once passengers are on board ("onboard revenue"), have improved Carnival's yield metrics in recent quarters. The most important of these measures is "net revenue yield," that is, net revenue divided by total available passenger cruise days.

As you know, we also have a nice tailwind in ticket prices over the next few years with the rollout of our new state-of-the-art revenue-management system, Yoda, which is progressing as planned. As previously indicated, the revenue-management system will be deployed across six of our brands to approximately 90% of those brands' inventory in the next few months to further facilitate yield uplift.

Managing revenue opportunity is quite tricky in the cruise business. As the cabins in a particular cruise are sold, finding the optimal pricing to fill capacity as departure looms is much more science than art. Dynamics particular to the industry also factor into passenger pricing. For example, Carnival often points out in its annual reports that the longer the cruise itinerary, the further in advance passengers tend to book. Thus, long-itinerary cruises may present a higher potential for revenue optimization than shorter cruises.

Carnival is optimistic that its new "Yoda" revenue management program will squeeze additional yield by maximizing the trade-offs which characterize this industry. Using advanced data analytics can help determine the appropriate level of discount to offer frequent travelers who are likely to spend more on board. That's an example of just one of a plethora of revenue trade-offs which can be crunched in real time by robust revenue-management software. Shareholders should expect to hear about the quantitative impact the new system is having over the next few quarters, as it rolls out between fiscal 2018 and 2019. 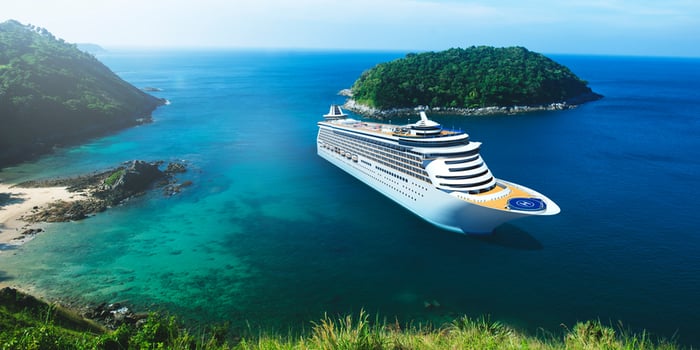 3. We're not changing our leverage position for shareholders or new ships

If we don't buy back shares for the rest of the year, we'd wind up with a debt-to-EBITDA ratio of less than two times. So we will see an increasing absolute level of debt as we repurchase shares throughout the year and maintain at least the two-times ratio. I mean, it's a target.

It's not an exact number. We'll never be at exactly two times. Our overall goal is to be somewhere between two times and 2.5 times, and to maintain the current leverage that we have from that perspective.

During Carnival's earnings call, CFO David Bernstein responded to an analyst's question regarding the company's balance sheet position vis-a-vis borrowings. For a cruise-line operator, the company has relatively little debt. As Bernstein points out above, Carnival carries a debt-to-EBITDA ratio of under 2.0, which is considered a quite moderate leverage ratio.

Specifically, Bernstein was responding to the analyst's suggestion that Carnival take on more debt to repurchase common stock. Historically, the company hasn't entertained such an idea. Last year, Carnival generated $5.3 billion in operating cash flow, and allocated $3.1 billion to ship-related capital expenditure. The company also paid out $1.1 billion in dividends, and repurchased roughly $550 million of its own stock. The remaining cash was used to repay long-term debt.

Management believes in keeping borrowings to a very manageable level, and has returned reasonable amounts to shareholders through annual share repurchases and a dividend which currently yields 2.75%. Pushing leverage ratios up to 4, 5, and even 6 times EBITDA in order to funnel money back to shareholders seems to be a popular trend among some large-cap companies at the moment. Yet Carnival is signaling that it would rather maintain a clean balance sheet.

Sticking to a ratio of 2.0 to 2.5 times EBITDA also indicates that management won't add debt for the sake of acquiring additional ship capacity; it will fund new ships primarily through its own cash flow. Personally, I think it's better to increase revenue yields on ships already in service -- something that Carnival is exhibiting a knack for at present.