Many biotech stocks have performed quite well over the last 12 months. But not Regeneron Pharmaceuticals (REGN 0.68%). For much of 2017, Regeneron outperformed its peers. Things went downhill beginning in September of last year, though, and haven't turned around.

Sometimes, a slide like Regeneron has experienced makes a stock a great bargain. In other cases, poor performance reflects longer-term problems. Is Regeneron a buy right now? Here are the strongest arguments for and against buying the stock. 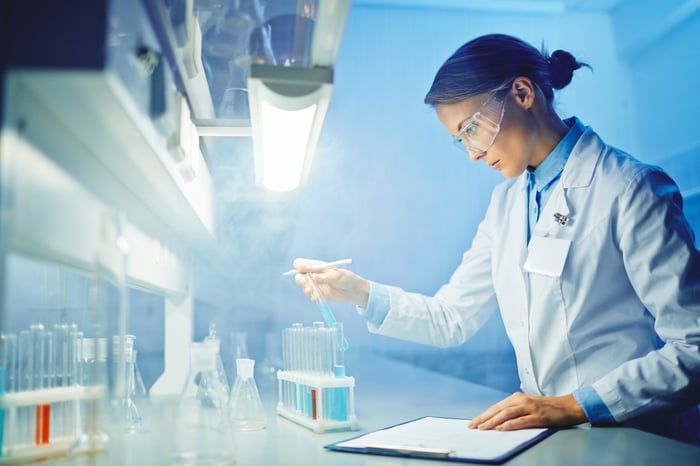 If you had to give a one-word description of the investing case for Regeneron, that word would be Eylea. The eye-disease drug generated total revenue last year of $5.9 billion. Regeneron split sales for the drug made outside the U.S. with partner Bayer (BAYR.Y -0.21%), but still recorded around $4.6 billion in revenue from Eylea.

Eylea continues to enjoy solid momentum. In 2017, global sales for the drug increased 14% year over year, with stronger growth in international markets. Regeneron hopes to boost sales even more with an additional indication. The company is evaluating Eylea in a late-stage study for treating diabetic retinopathy without diabetic macular edema.

Regeneron also has other approved drugs that are generating increasing revenue. Dupixent is the biggest success story so far. Kevzara won Food and Drug Administration approval for treating rheumatoid arthritis in May 2017, and is still ramping up. Cholesterol drug Praluent generated the highest sales growth last year, with revenue jumping 68% year over year. Sales for colorectal cancer drug Zaltrap increased 16% last year. Regeneron shares profits with partner Sanofi (SNY -1.88%) on all four of these drugs.

Perhaps the most important late-stage candidate for Regeneron, though, is cemiplimab, on which it also partners with Sanofi. After reporting positive results from a late-stage study of the PD-1 inhibitor in treating skin cancer, Regeneron and Sanofi are moving forward with submitting cemiplimab for FDA approval.

The case against Regeneron

A company's greatest strength is at times also its greatest weakness. That's true for Regeneron. While Eylea has been a huge commercial success, Regeneron is highly dependent on this one drug, with Eylea contributing 78% of the company's total revenue.

Regeneron's other key drugs also have stiff competition. Praluent hasn't performed nearly as well as hoped due to payer pushback on expensive PCSK9 inhibitors. But it also competes directly against Amgen's Repatha, which already has a product label reflecting data that showed improvement in cardiovascular outcomes.

Dupixent battles against Pfizer's Eucrisa in treating atopic dermatitis and could see more challengers. And with good, but not great, results for Dupixent in a late-stage study for treating asthma, it could be tough for the drug to take significant market share in the already-crowded market.

Speaking of already-crowded markets, Kevzara has an uphill battle in rheumatoid arthritis. As promising as cemiplimab is, five other PD-1 or PDL-1 inhibitors have already been approved, with a couple others in late-stage development.

In my opinion, Regeneron will continue to make a lot of money and grow sales over the next few years. Eylea remains the drug to beat in its market. Sales for other drugs, including Dupixent and Praluent, should grow as well. The biotech will also likely enjoy significant pipeline wins.

However, I suspect that future success for Regeneron will be more difficult to come by than it's been in the past. The company's dependence on Eylea increases the pressure on the biotech to produce new blockbusters.

Is Regeneron stock a buy? I wouldn't bet against the stock, but I don't think it's a buy, either. In my view, there are too many other biotech stocks with more compelling risk-reward propositions.

Why Regeneron Pharmaceuticals Stock Is Crushing It Today
376%