On March 27, Apple (NASDAQ:AAPL) introduced an updated version of its highly successful low-cost 9.7-inch iPad, known simply as "iPad." The improvements included a new processor and support for the company's Apple Pencil accessory. 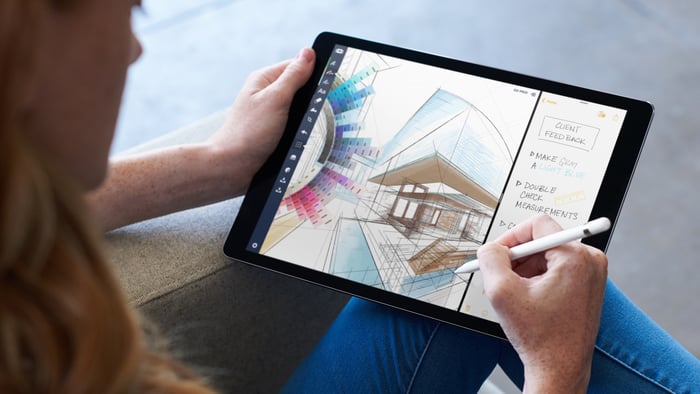 Here's the good news for investors, though: The iPad Pro tablets are still so significantly differentiated from the low-cost iPad that it's unlikely that somebody interested in the iPad Pro for any reason beyond Apple Pencil support would go for the cheaper iPad instead.

Let's go over three ways the iPad Pro is still superior to the new low-cost iPad.

The faster displays on the iPad Pro tablets make a huge difference in everyday usage, as just about everything -- particularly swiping and scrolling -- feels a lot faster and more fluid.

I suspect that Apple will continue to differentiate its iPad Pro line with faster displays than their more mainstream counterparts in the years ahead.

Over the last several years, Apple has been upgrading the displays across its various devices (Mac, iPhone, and iPad Pro) to support a wider color gamut known as DCI-P3. Here's what Apple's developer documentation says about DCI-P3:

So, in addition to having faster displays, Apple's iPad Pro line also comes with more vivid displays than the one on the new iPad.

The new low-cost iPad has an A10 Fusion chip inside -- the very same processor that powers the iPhone 7-series smartphones. While it's quite fast overall, Apple's latest iPad Pro has a much faster chip known as the A10X Fusion.

The A10X has six processor cores, compared to the four inside of the Apple A10, and the former has a substantially faster graphics processor than the latter. This means that the higher-end iPad Pro tablets should be superior to the new low-cost iPad in computationally heavy applications, multitasking performance, and 3D gaming performance.