Shares of online marketplace Etsy (NASDAQ:ETSY) have more than doubled in the last year, a far cry from the all-time lows they plumbed back in 2016. Not much has seemingly changed with business operations themselves, but new management's focus and a big tailwind from the digital economy have helped the company's stunning rebound.

For starters, it's worth acknowledging that Etsy was never in dire straights. The business has been steadily growing revenue for years. However, that growth started to lose a little steam a couple of years ago, and investors were expecting a steeper trajectory for an online retailer that has to contend with the likes of Amazon and eBay. 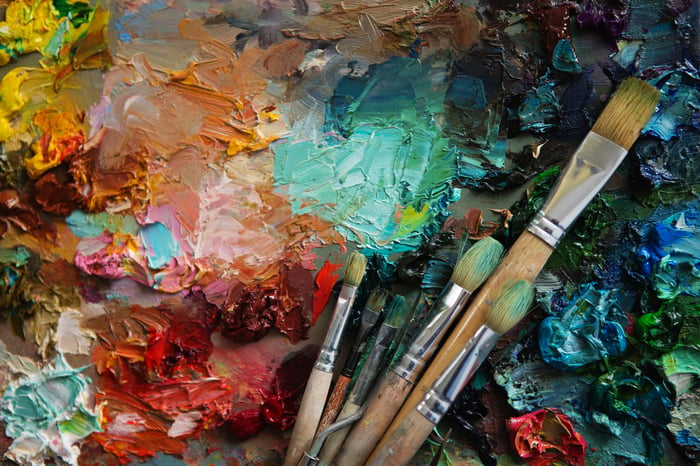 Last year, Josh Silverman was brought in as CEO. A former executive at eBay and American Express, Silverman was hired for his experience with consumer technology businesses and global marketplaces. The chief financial officer and chief technology officer were replaced as well shortly thereafter.

Upon completing a review of the business and downsizing the number of employees, Silverman outlined Etsy's new strategy to accelerate growth of the business:

We took decisive steps to double down on the fewest, highest-impact initiatives in our core marketplace while de-prioritizing other projects and streamlining our resources. Parting ways with our colleagues is not easy and I am thankful for their contributions. We are moving forward with a more nimble structure that supports our current business needs and allows for faster execution so we can better serve creative entrepreneurs around the world.

The focus on "'vital few' initiatives" -- the most important being increasing gross merchandise sold (GMS) on Etsy's online marketplace -- has paid off. The new management team decided to slim down the company's size and number of projects to refocus on the merchants selling on its site. As a result, GMS accelerated in the final quarter of 2017 to 17.8% year-over-year growth and topped $1 billion for the first time. That led to a 23.6% revenue increase for the fourth quarter and 20.9% revenue growth for the year. 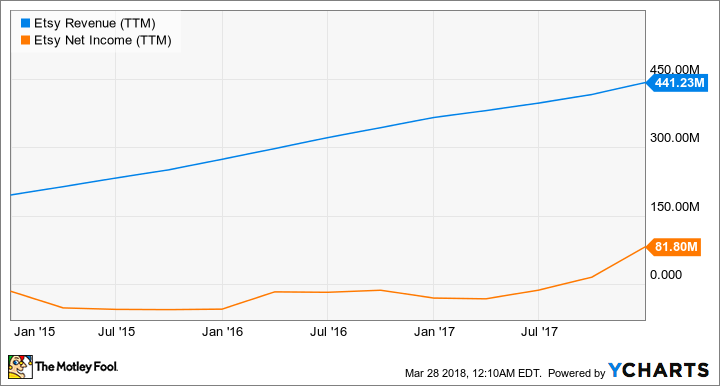 The expansion of Etsy's style of retailing got some external help as well. The overall retail industry had a great 2017, with total sales increasing 4.4%. Leading the charge was online retail, which increased 11.4%. Being a part of the fastest-growing segment of retail was a tailwind for Etsy.

Etsy is also responsible for renewed interest in original merchandise of the boutique variety. The internet has helped many artists turn their craft into a business, and Etsy's marketplace helps many of them find an outlet for their goods. The public's interest in handmade product is evident from the company's fast growth, but its success as a marketplace for entrepreneurial craftsmen and women hasn't gone unnoticed, though.

Competitors have tried to create their own versions of markets for all things handmade. When Amazon Handmade, for example, launched in 2015 it created worry for Etsy investors. Though Amazon doesn't give specifics for its Handmade segment, it appears that the similar service has had no effect on Etsy. Revenues have continued their upward trajectory, and the renewed acceleration of growth as of late is proof Amazon hasn't derailed its small rival.

With consumer trends migrating to digital, the old Etsy may have taken for granted the ease in which it was growing, but the last year is proof that simplicity and focusing on the best ideas wins. By downsizing operations and refocusing its efforts on its real customers -- craftsmen, artists, and aspiring entrepreneurs -- Etsy has reestablished itself as a serious contender in the digital retail world.