If you're like most Americans, you're a subscriber to a streaming service.

A recent Digital Media Trends survey by Deloitte found that 55% of American households now subscribe to one or more streaming service, the first time more than half of Americans have been streaming customers. In 2009, that number was just 10%.

That wasn't the only piece of good news for Netflix Inc. (NASDAQ:NFLX) and its ilk. Based on the survey's findings, there should be a long path of growth ahead for streaming services as more Americans realize that they offer a significantly better value than traditional pay-TV options; customers also generally pay for more than one service. Let's take a dive into some of the key lessons from the research. 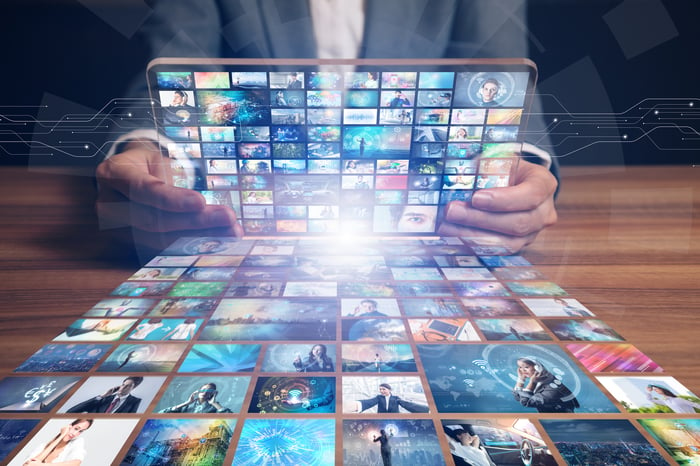 The streaming field is becoming increasingly crowded. In addition to longtime incumbents like Netflix, Amazon (NASDAQ: AMZN), and Hulu, Apple (NASDAQ: AAPL) and Disney (NYSE: DIS) are both angling for a piece of the pie, and premium channels like HBO and Showtime also operate their own stand-alone streaming services.

However, streaming isn't a zero-sum game. More often than not, customers subscribe to multiple services, meaning the different subscription packages are complements rather than competitors. In fact, Deloitte found that Americans on average subscribe to three streaming services, spending a total of $2.1 billion a month on such entertainment, and that total grows every month.

Deloitte also said, "Consumers' appetite for video and streaming is insatiable," as time spent consuming video has also increased. With Apple and Disney set to launch their own streaming services, the takeaway seems to be that the number of services subscribers join will only increase from three as content improves.

Ever since Netflix broke the mold with House of Cards, streaming services have been increasingly focused on their own original programming. Hulu and Amazon have both had success: Hulu won an Emmy for The Handmaid's Tale, and Amazon has won awards for a variety of shows, including Transparent.

That result helps explain why Netflix is investing billions into original content, with plans to release 700 original seasons of TV series and 80 original movies in 2018. That strategy helps explain why users subscribe to multiple services, as originals provide unique value for the services that host them.

The so-called cord-cutting phenomenon, the process of Americans' ditching their cable services for streaming services, has been going on for years, but Deloitte seemed to find that cord-cutting was accelerating. The research firm said the "value gap" between streaming and Pay TV is expanding, meaning that streaming is becoming an even better deal for Americans compared to cable than it was before.

Deloitte said there was a widening gap between what pay-TV subscribers expect and what they actually get, and the survey found that nearly half of those subscribers are dissatisfied with their service. Seventy percent said they feel that they don't get enough value for their money.

The survey also said that pay TV penetration had fallen from 75% to 63%, and that 27% of respondents said they cut the cord last year.

What that means for streaming services like Netflix is that even more customers will be signing up in the coming years as dissatisfaction with cable grows and streaming options improve. That increase in the customer base is a boon for all streaming competitors, as it should only grow the pie for all services.

Netflix looks well positioned for the upcoming changes in the industry as its massive library of originals gives it a strong position even as deep-pocketed rivals like Apple and Disney join the fray.

Netflix CEO Reed Hastings has repeatedly dismissed the idea that Apple and Disney are direct competitors, and predicted at a conference that internet TV viewing would rise every year for the next 20 years, while traditional pay TV declines. As the Deloitte survey shows, Hastings seems to have his finger on the pulse of the industry. Expect Netflix's rapid growth to continue even as Apple and Disney join the party.