Please ensure Javascript is enabled for purposes of website accessibility
Log In Help Join The Motley Fool
Free Article Join Over 1 Million Premium Members And Get More In-Depth Stock Guidance and Research
By John Rosevear – Updated May 16, 2018 at 10:53AM

When a stock's story changes, look out.

It felt to many like a profoundly important moment: Suddenly, Tesla was America's most valuable automaker, almost as if GM had passed the torch.

But now, GM has grabbed it back. At just under $51 billion as of Thursday's close, GM's market cap was almost $6 billion higher than Tesla's.

Why does the market now think that Tesla is worth less than GM?

Tesla's Model 3 was supposed to transform the company into a major global automaker. But manufacturing problems are writing a very different chapter in Tesla's story. image source: Tesla, Inc.

This is really about Tesla's valuation, not GM's

I should be clear about something up front: This has never ever been about the companies' relative fundamentals. GM sold 9.6 million vehicles around the world last year, earning $12.8 billion on an adjusted pre-tax basis, while Tesla delivered 103,097 vehicles and lost $2.2 billion before taxes.

Tesla has had one of the all-time great corporate stories, inventing super-cool technology with near-limitless growth potential. That story has powered it to a valuation far beyond anything that is even remotely justified by its fundamentals.

Of course, the thing about story stocks is that when the story changes, the stock price can change quickly as well. And in the last couple of weeks, Tesla's story has started to show some cracks -- at least one of which could turn out to be a huge fissure.

Tesla's story has come under pressure

March was a rough month for many stocks, including GM. But it was rougher for Tesla than most: The company's share price, and its market cap, dropped over 20%. 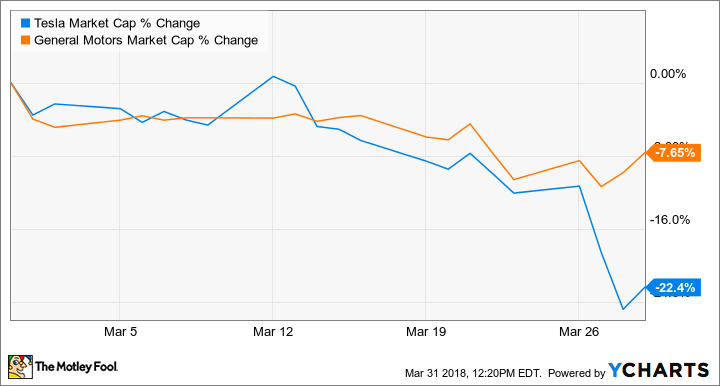 Tesla's Model 3 is supposed to be the car that will transform Tesla from a boutique maker of high-end electric vehicles for tech enthusiasts to a genuine mass-market automaker, one that builds cars by the millions year after year.

To get there, Tesla said it would create a super-automated production line faster and more efficient than any automaker had ever attempted. Musk compared the sophistication of this future Model 3 factory to a giant starship (an "alien dreadnought"), saying that the production line's robots would move so quickly that air resistance would have to be taken into consideration in their design. 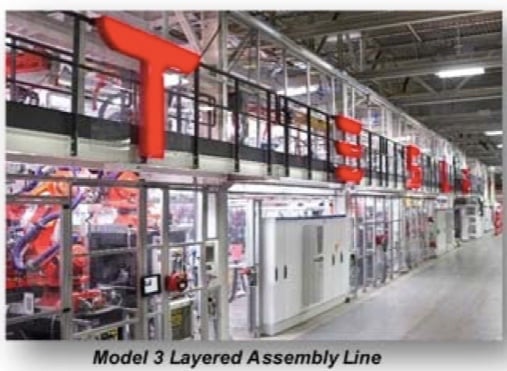 As late as the second quarter of 2017, Tesla was still confidently predicting that it would be producing 5,000 Model 3s a week by the end of the year, and would hit 10,000 per week at some point in 2018 -- a production rate seen only at a few of the world's busiest auto factories.

As of right now at least, it looks as if Tesla fell well short of even that walked-back guidance. Bloomberg estimates that the Model 3 production rate was just shy of 1100 per week as of the end of March. Even if it turns out that Tesla worked around the clock to break 2,000 in the very last week of the quarter, it has been apparent that its output of Model 3s wasn't anywhere near its guidance for most of the first quarter.

That's a problem. But it's not the only problem.

If Tesla was just running behind its predicted ramp-up schedule, that would be one thing. But there's another issue: The Model 3s that have been coming out of Tesla's California factory have been plagued with problems. Issues like visibly misaligned body panels and trim pieces, glass that is prone to cracking, and mysterious squeaks and rattles, among others, seem to be common.

As I said over a year ago, consistent quality problems in early Model 3s could put a big dent in consumer demand for the vehicle. There are some signs that that may be starting to happen. But Tesla may have an even bigger problem right now.

Influential auto analyst Max Warburton, of the investment firm Sanford C. Bernstein, worked for an organization that benchmarked auto-plant efficiency before becoming an analyst, and thus has a deep understanding of how cars are made. Warburton said in a note that these defects may be much more than teething troubles with a brand-new assembly line They may be a sign of a flaw in Tesla's entire approach to building the Model 3, specifically its attempt to automate final assembly.

Tesla's approach to automation rings alarm bells. If we look at the history of the auto industry, we can see that attempts to automate final assembly haven't worked. Many [automakers] have tried it in the past -- such as Fiat, VW and GM. They have all failed, often spectacularly. [Emphasis added.]

The key problem, as Warburton explains, is that robots don't recognize their own mistakes. The automated assembly line will power on, building car after car with a misaligned panel or a spot weld in the wrong location -- until the errors start to show up as problems in finished vehicles.

In final assembly, robots can apply torque consistently -- but they don't detect and account for threads that aren't straight, bolts that don't quite fit, fasteners that don't align or seals that have a defect. Humans are really good at this. Have you wondered why Teslas have wind noise problems, squeaks and rattles and bits of trim that fall off? Now you have your answer.

Most automakers automate parts of their vehicle assembly plants. The processes of stamping sheet metal, painting, and spot-welding are amenable to automation -- and in most modern auto factories, those things are largely automated.

But in those same plants, including plants that build the highest-quality mass-produced vehicles in the world, final assembly is done by humans. That's not science-fiction cool, but it's what works.

The upshot: Tesla may have a big problem of its own making

If Warburton is correct, Tesla has a big problem.

It has spent a fortune to build the Model 3's super-automated assembly line at its Fremont factory, roughly double what a mainstream automaker would have spent to scale up to produce 5,000 vehicles a week.

If that line can't be made to work,Tesla will have to tear it out and start over -- if it can find the time, the money, and the humility to do so.

It's possible that the time and money can be found, although the stock price will likely take a big hit if Model 3 production is set back by months. Finding the humility may be a larger challenge.

I know that sounds like a snarky joke, but consider: What happens to Tesla's story if the idea of a transformative manufacturing breakthrough has to be thrown out? What happens to Tesla's story if the only way to fix the Model 3's production line is to tear it out and replace it with a process to build the Model 3 the same way the "legacy" automakers would?

If Tesla becomes just another automaker, what kind of valuation will it deserve?

The answer may turn out to be "one like GM's." If so, look out below.