Please ensure Javascript is enabled for purposes of website accessibility
Log In Help Join The Motley Fool
Free Article Join Over 1 Million Premium Members And Get More In-Depth Stock Guidance and Research
By Leo Sun – Apr 2, 2018 at 8:52AM

Tencent’s post-earnings dip is a buying opportunity for long-term investors.

Second, South African media company Naspers, one of Tencent's top shareholders, sold 2% of its stake to raise cash. Naspers said that it didn't plan to sell any more shares for three more years, but the sale exacerbated Tencent's post-earnings drop.

Lastly, the saber-rattling between the U.S. and China over trade tariffs sank many high-flying stocks in both countries.

Nonetheless, I have no plans to sell my shares of Tencent, which has roughly doubled since my initial purchases in early 2017. Here are eight reasons Tencent could still double again from current levels.

Over the past few years, Tencent expanded WeChat into an all-in-one platform for ridesharing, delivery services, e-commerce, payments, and other services. That expansion widens its moat against archrival Alibaba (BABA 0.57%), the top e-commerce company in China.

WeChat often overshadows QQ, Tencent's older messaging app that originated on PCs as an ICQ clone. But over time, QQ evolved into more refined PC-based messaging app, and became integrated into many top websites as a preferred communication tool. For example, vendors on Alibaba's Taobao often use QQ to answer customer questions.

Tencent has been pushing its PC users to switch to the mobile version, and the effort was fairly successful. QQ's total MAU's fell 10% annually to 783 million last quarter, but the platform's smart device MAUs rose 2% to 683 million.

Tencent is also the largest video game publisher in the world by annual revenue. Its portfolio of games includes Riot Games' League of Legends, Supercell's Clash of Clans, and Honor of Kings (also known as Arena of Valor). It also owns stakes in Activision Blizzard and Glu Mobile. 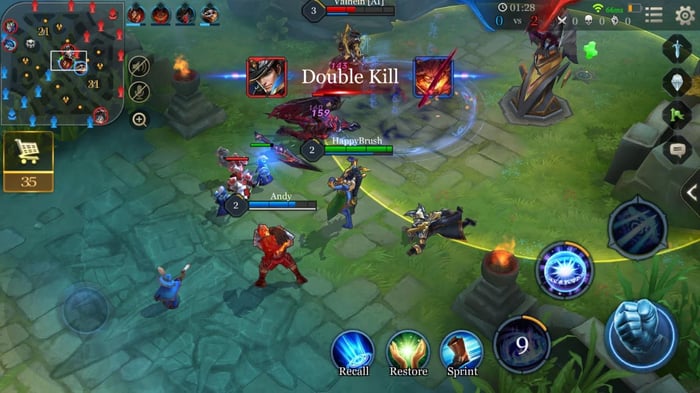 4. An expanding ecosystem of value-added services

WeChat, QQ, the older social network Qzone, and the gaming business are all included in Tencent's VAS (value-added services) segment. VAS revenue rose 37% annually last quarter and accounted for 60% of its top line. Within that total, its social network revenues climbed 45% annually, as did its online game revenue, to 32%.

This ecosystem is still expanding with plenty of newer services, like paid subscriptions for Tencent Video, which rivals Baidu's iQiyi as one of the top video streaming services in China; Tencent Music, the top music streaming platform in China; and live video broadcasts, which let viewers buy virtual gifts for their favorite broadcasters. Other notable services include online comics and esports video streams.

Tencent's ad revenue jumped 49% annually last quarter and accounted for 19% of its top line. The company generates revenue by playing ads for free users on Tencent Video and Tencent Music and displaying ads across WeChat and its network of online ads.

WeChat Pay, which is integrated into WeChat, is one of the most popular mobile payment apps in China. WeChat Pay can be used for online payments, in-store payments, and peer-to-peer transactions. Tencent also offers QQ Wallet, a payments platform that's integrated into QQ, and an enterprise-oriented payments platform called TenPay. Alibaba's Alipay competes against all these services.

Tencent also has a growing cloud services platform, which offers computing power to small to medium-sized businesses. Alibaba Cloud is the 800-pound gorilla in this market.

Both WeChat Pay and Tencent Cloud are part of the company's "other businesses," which include other side bets (like investments in other high-growth companies). Those "other" revenues surged 121% annually last quarter and comprised the remaining 21% of the company's top line.

While Alibaba controls the e-commerce market, Tencent rules the social and gaming markets. But the latter is expanding into the former's turf with a growing list of e-commerce and brick-and-mortar retail partners.

Tencent is the top investor in Alibaba's biggest rival, JD.com (JD -1.55%), with which it shares user and shopper data. Tencent inked e-commerce partnerships with retail giants like Walmart and Carrefour, and is a major backer of Meituan Dianping, one of the two most popular food delivery apps in China. Its main rival is Ele.me, which was recently acquired by Alibaba.

The stock can't be considered a bargain at 37 times forward earnings, but it's a reasonable multiple for one of the hottest growth stocks in China. Therefore, any big dip is a still great opportunity to buy more shares.