Please ensure Javascript is enabled for purposes of website accessibility
Log In Help Join The Motley Fool
Free Article Join Over 1 Million Premium Members And Get More In-Depth Stock Guidance and Research
By Nicholas Rossolillo – Apr 2, 2018 at 10:41AM

The stock has been headed the wrong direction since the end of 2017.

After a run-up that nearly doubled its value two times over, shares of Universal Display (OLED -2.11%) have been headed the wrong direction as of late. The culprit is downbeat expectations for 2018 as display manufacturers retool for another organic light emitting diode (OLED) technology push next year. Though things look ugly right now, the company's shares aren't dead.

OLED technology -- which enables more vibrant colors, thinner screens, and better energy efficiency than LED -- has been gaining traction the last few years. Because of the higher quality and new applications OLED makes possible, the display type has been finding its way into new television sets, smartphones, and lighting.

That benefits Universal Display, which owns patents on OLED technology. As a patent holder, the company isn't a bet on which company makes the best displays. OLED in general only needs to continue getting adopted for the company to win. That trend has begun and the results for Universal Display have been stunning. 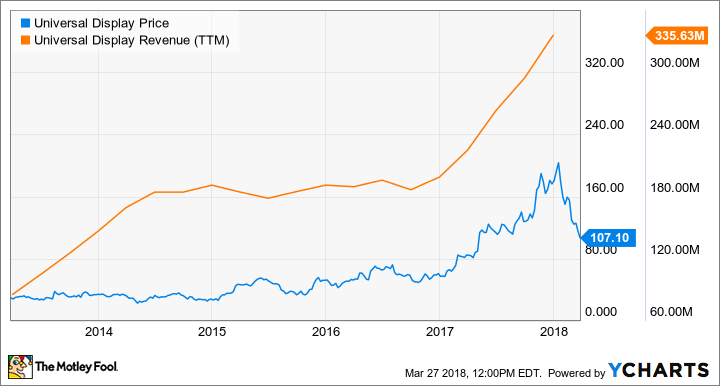 There is more room for growth, as very few smartphones and new TVs make use of the technology. A few examples that do are some of LG Electronics new televisions and Apple's iPhone X. Because of its efficiency, moldability (versus a traditional rigid display), and ability to be manufactured completely transparent, OLED opens up the possibility for new form-fitting wearable devices, molded panel lighting, and curved instrument displays in vehicles. Many other use cases are waiting for development. 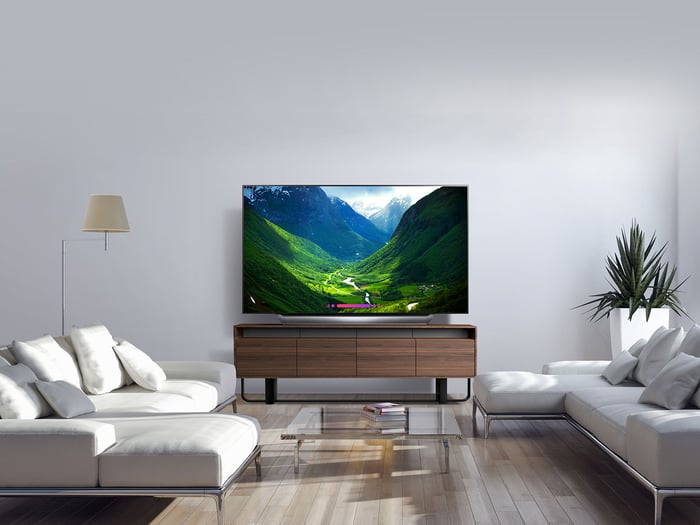 In a recent article I wrote here, I talk about the best way to bet on an OLED future. That is undoubtedly Universal Display, as any device maker wanting in on the benefits of the tech has to purchase, license, or come to some agreement with them to utilize it. That does not mean Universal Display is without risk, though, as the recent price action of shares demonstrates.

During its fourth-quarter 2017 report, management talked about an expected slowdown in OLED adoption in 2018. CFO Sidney Rosenblatt had this to say:

"After an extraordinary year-and-a-half of new capacity installs, we expect industry capacity growth to take a bit of a breather this year as panel makers build the framework for the next wave of high volume OLED production, which is expected to ramp next year. 2019 is poised to be a meaningful year of growth. Based on current production timelines, we estimate the installed capacity base, as measured in square meters, will increase by approximately 50% over the next two years."

Revenues are expected to grow between 4% and 13% in 2018. That's a big slowdown from the 69% reported in 2017. With valuations sky high, the stock started to unwind after the year-end report. Even after a near 50% cut in valuation, Universal Display's stock still prices in robust growth with a forward price-to-earnings ratio of 26.5 as of this writing.

Also, as some readers have pointed out, other stocks that play in the OLED sandbox like LG Display could end up outperforming Universal Display in the short term. They are diversified, supplying various display types including LED while Universal Display relies solely on OLED. MicroLED technology, which some heavyweights like Apple and Samsung have been working on, could also offer an alternative to OLED.

MicroLED is still years away from mainstream adoption, though. And "diversified" companies that rely on old LED tech, like LG Display, could end up at a disadvantage long term as LED panel prices are falling and their capabilities fall short of what OLED offers.

Nevertheless, Universal Display investors should expect a wild ride in 2018. However, all is not lost as management said OLED business should pick up pace again later in the year. If the bloodbath in shares of Universal Display continues for much longer, this stock could soon look like a bargain.