Shares of independent oil producer SM Energy Co. (NYSE:SM) were down more than 9.5% at 2:50 p.m. EDT on April 2. And as is often the case on days when the overall market is volatile, there isn't any material news out there that's responsible for SM Energy's stock-price decline.

But there's no beating around the bush: Today is a bad day for most oil stocks, but especially independent U.S. producers. At this writing, West Texas Intermediate futures are down almost 3%, a sharper decline than the 2.4% drop in Brent Crude prices. For context, Brent represents a substantial volume of global oil, while the WTI benchmark more closely reflects the price that U.S. producers like SM Energy are able to realize for their oil production.

Let's compare two popular oil and gas ETFs to see how the market can react to these sorts of price drops. The Energy Select Sector SPDR (NYSEMKT:XLE) exchange-traded fund reflects a broad swath of the entire oil and gas industry, while the SPDR S&P Oil & Gas Explore & Prod. (NYSEMKT:XOP) ETF is comprised of producers, a significant number of which have significant exposure to U.S. oil prices. 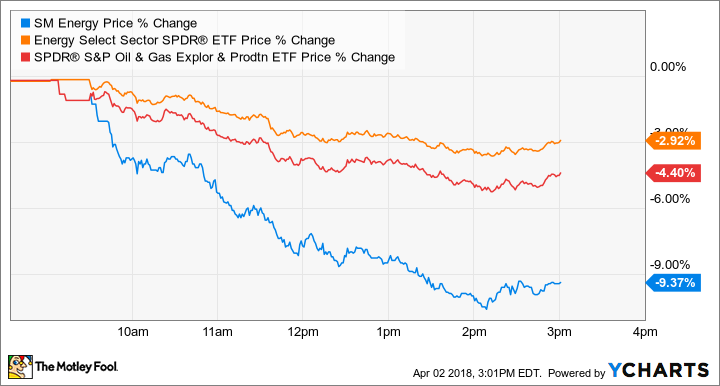 As the chart shows, independent producers are down more today than most other oil and gas stocks. This is in part because of the sharper drop in WTI prices than in Brent.

So what's driving today's big drop? More of the "trade war" fears that have come to dominate the news cycle over the past couple of months. In response to the Trump administration's recent trade actions on steel and aluminum, China announced retaliatory tariffs of as much as 25% on more than 100 American products, including produce, pork, and other goods.

This affects oil prices because of fears that a heightening of trade tensions between the world's two biggest economies could have major negative repercussions, including harming the global economy. And if the global economy weakens or even goes into recession, that would impact oil consumption, which would be very bad for global oil prices.

This shows one of the risks -- in the short term -- of investing in any stock, not just oil stocks. Unexpected and often unrelated (at least not directly) factors can affect markets and investors, and move share prices substantially. And that's the case for SM Energy's stock today.

Don't get me wrong: I'm not saying SM Energy is worth buying on today's drop. Today's news is not immaterial, and if the U.S. and China can't find some middle ground on trade relatively soon, further escalation could be detrimental to the global economy and oil prices. And that would be bad for a small producer like SM Energy.

But SM Energy is taking steps to improve its business and balance sheet. The company recently sold a substantial majority of its Wyoming assets for $500 million, which it will use to pay down its debt, while also freeing up resources to focus on its Permian Basin and Eagle Ford assets in Texas. Management expects that this move, along with other steps to improve its operations and cash flow, will allow it to "align cash flow and total capital spend" by mid-2019.

Whether the company can accomplish that is yet to be determined. It hasn't been consistently cash flow positive in more than a decade, and has only reached that level on a 12-month basis once -- in early 2010 -- since before the Great Recession.

With that history of performance in mind, my suggestion is to put the stock on your watch list. But I wouldn't invest until management proves it can better balance spending with cash flow -- that's how it will be able to survive, and even thrive, across any economic environment.