These small biotechs could be huge winners. But they also have huge risks.

How aggressive an investor are you? The answer to that question will go a long way in determining what kinds of stocks you should consider.

Some stocks are candidates for only the most aggressive investors. For example, most investors should probably avoid buying small-cap biotech stocks. Although there's a potential for high returns with these stocks, the risks are also very high. 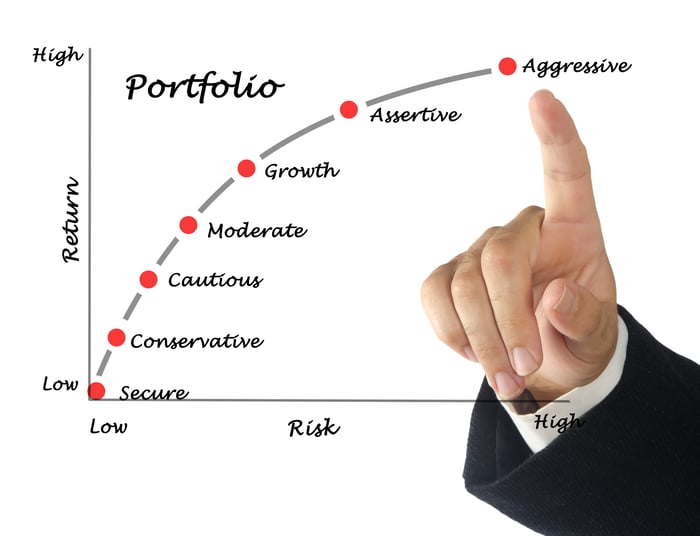 If you want to know why most investors should stay away from small-cap biotech stocks, just look at Celldex Therapeutics in 2016. The company's lead candidate at the time, cancer vaccine Rintega, flopped in a late-stage study. Celldex stock collapsed and still hasn't recovered.

However, Celldex once again has a promising drug that could be on the way to approval. Investors eagerly await the announcement in the second quarter this year of results from the pivotal Metric study evaluating glembatumumab vedotin (glemba) in treating triple negative breast cancer.

The good news for glemba is that it performed well in a previous phase 2 clinical study. The bad news is that the study was small, with the best results for the drug coming from only 10 patients. There's no way to know for sure at this point how glemba will fare in the Metric study.

Based on the biotech stock's price, the market seems to be discounting the chances for glemba. The market could be right, but I think the risk-reward proposition for Celldex is one that aggressive investors could find attractive.

Madrigal Pharmaceuticals provides another history lesson about the risks of small-cap biotechs. Madrigal merged with Synta Pharmaceuticals in 2016, with Synta taking Madrigal's name. Synta suffered a huge block in 2015 when its lung cancer drug ganetespib failed in a late-stage study.

Now, though, the experience with ganetespib is largely forgotten, with all eyes on Madrigal's lead candidate MGL-3196. In December 2017, Madrigal announced tremendously encouraging results from a phase 2 study of the drug in treating non-alcoholic steatohepatitis (NASH).

Madrigal expects to report full 12-week phase 2 results and top-line 36-week data, including liver biopsy results, later this year. The company plans to advance the drug to a late-stage study after discussions with the U.S. Food and Drug Administration (FDA). In addition, Madrigal will announce results in 2018 from a phase 2 study of MGL-3196 in treating heterozygous familial hypercholesterolemia (HeFH), a genetic disorder that causes high cholesterol levels.

I suspect that the phase 2 results for MGL-3196 caught the eye of several larger drugmakers that could be interested in acquiring Madrigal. Quite a few big biopharmaceutical companies are jockeying to become the leader in treating NASH, a disease that is projected to become a huge market over the next few years.

It's kind of the same song, with a different verse, for Novavax. The biotech stock plunged in 2016 after its respiratory syncytial virus fusion protein (RSV F) vaccine missed all end points in a late-stage clinical study for immunization of older adults.

There's still hope for the RSV F vaccine, though. Novavax is evaluating the vaccine in maternal immunization of infants in a late-stage study. Interim results from this study are expected to be announced in early 2019.

Novavax also has another intriguing candidate with its NanoFlu flu vaccine. In January, the company announced positive top-line results from a phase 1 study of the vaccine. Novavax is presenting detailed information from that study this week at the World Vaccine Congress. The biotech plans on moving forward with a phase 2 study of NanoFlu in the third quarter.

There's a lot of risk with a clinical-stage biotech with a lead product that has already failed in a late-stage study, and one that is a very early stage No. 2 pipeline candidate. But phase 2 results for the RSV F vaccine in maternal immunization looked good. Novavax also announced results from an "informational analysis" of the phase 3 study in January that showed the vaccine has an efficacy of at least 45%. And while it's definitely early, NanoFlu appears to be very promising. Novavax could become a big winner if either of its top candidates succeed.

I think aggressive investors should take a look at Celldex, Madrigal, and Novavax. The risks are high with each stock, but so are the potential rewards.

Aggressive investors by nature are comfortable with taking on high levels of risk in exchange for the possibility of big returns. But check out any stock -- small-cap biotech or not -- thoroughly before buying. And don't put more money into a stock, especially speculative stocks, than you're willing to lose. Aggressive shouldn't mean foolish (with a lower-case "f") and rash.