From someone whom many associate with perilous warnings, the author has a cheery outlook for the future.

The world of tomorrow is often portrayed as bleak: Unemployment will skyrocket due to automation, the chasm between haves and have-nots will only widen, and our jobs -- those things that often give us Americans our sense of purpose and meaning -- might not exist.

It might be surprising, then, to hear Nassim Nicholas Taleb -- a man who warned about the fragility of the financial system before the Great Recession hit -- be so optimistic about what's next. The future, he believes, will belong to artisans. 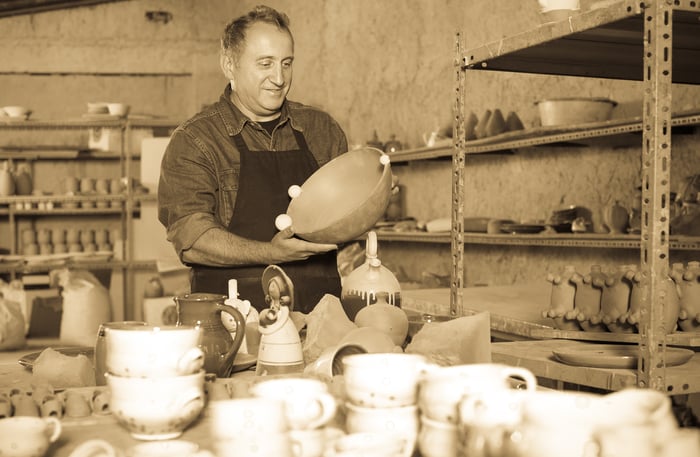 Artisans do things for the pure joy of doing them. Image source: Getty Images.

Recently, I had the chance to sit down with Taleb -- a former trader, current professor of risk engineering at NYU, and best-selling author of Fooled by Randomness, The Black Swan, Antifragile, and the recently released Skin in the Game. We covered his hopes for the future -- he believes that it will belong to artisans -- why Steve Jobs was a true artisan, and how to know if someone is an artisan or a business person. Here are some of his thoughts:

On how to detect if someone is a true artisan

The typical artisan knows where to stop. ... They say, "O.K., I'm satisfied with this."

Whereas if you hire someone from McKinsey, they'll end up making you keep going beyond and doing [more]. They want you to expand until you end up in bankruptcy.

The bottom line is that artisans truly enjoy what they are doing. They pursue their interests first for intrinsic rewards, before any extrinsic benefits are brought into the equation. When those extrinsic rewards creep in, they can make one's artisanship perverse.

Of course, there needs to be a level of talent involved if you ever hope to receive -- financially -- anything from your artisanship. But that's where a paradox comes in: those who love what they do are more likely to continue practicing for the sake of just doing. But that tendency also means you'll get more practice, which means you'll always be getting better, making it more likely that financial rewards will be a byproduct of your pursuits.

On whether or not Elon Musk is an artisan

No. ... He's a good kind of entrepreneur. But, the artisan is someone like me: You cannot be a promiscuous entrepreneur if you're an artisan. And also, you know where to stop. The problem is Steve Jobs stopped at the product line.

To be clear, this isn't a knock on Musk. Taleb himself has written about how much he enjoys driving his Tesla. Instead, it is a commentary about motivation.

Musk has a vast and growing empire focused on renewable energy. It's clear that this has gone beyond any joy that Musk might have from designing cars. And, perhaps prophetically for Taleb, Musk's drive to "keep going beyond and doing more" is currently putting his company -- and shareholders -- in peril for financial turmoil.

How to use this wisdom in your own life

Reading every day about how robots are going to take over the world, I've found solace in what Taleb has to say. Of course, there's some level of talent that's necessary to earn a living off of something some consider to be a "hobby." But then again, this harkens back to the importance of finding your own level of "Enough" -- and measuring what really matters in life.

In a slightly different vein -- and more immediately applicable to today's near-retirees -- I've often seen a tight connection between Taleb's view of the importance of being an artisan and what many retirees need in order to enjoy their later years.

Studies and surveys by author and radio host Wes Moss have found a predictive way to tell if someone will have a "happy" retirement. Those that enter retirement with 3.6 "core pursuits" report that they are very satisfied with life after work. Those with less than two are the opposite -- often reporting that they are miserable, regardless of their income levels.

That's a crucial and underappreciated piece of information. "Core pursuits" and being an "artisan" are interchangeable in this sense. A core pursuit -- as defined by Moss -- can be anything that gives us purpose and meaning. Gardening, spending time with grandchildren, coaching, mentoring, playing bridge, writing books -- they all qualify as core pursuits.

And, crucially, retirees can stop doing any of these activities when they feel like they've reached their saturation point. That's the dividing line between work and play, and it's also the marker of artisanship.

This isn't to say that finances are unimportant in retirement: if you can't afford food, medical care, and safe housing, you won't have the time or mental energy to focus on Core Pursuits -- you'll be in survival mode all the time.

But if you're reading this now, have your finances in order, but have not developed your own core pursuits, remember that you need to do so by the time you enter retirement. Wait any longer, and your own happiness hangs in the balance. Get started now!