The world is still a ways off from becoming like the movie "Ready Player One," but the video-gaming industry keeps inching its way in that direction.

The TV and movie industry has already begun moving en masse to the cloud, with companies like Netflix leading the way. Video games are a little behind the curve, but the same trend is getting started. Some recent moves by cloud computing companies could be hinting that more change is on the way.

What is cloud gaming?

Cloud-based video games work in a similar fashion as TV streaming technology. The idea is that most or all of the computing necessary to render a game is done in a data center, and the video game is streamed via a high-speed internet connection back to the player on a TV, computer, or other supported device. 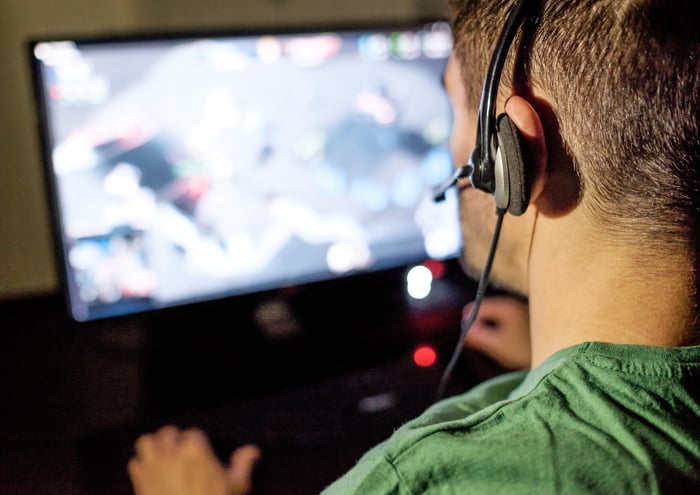 The benefit of cloud gaming is that it can eliminate the need for expensive hardware and the purchase of physical games. In the near future, all that will be needed is a monitor of some sort, like a TV or smartphone. Cloud gaming also makes the social aspect of video games easier, like online multiplayer events, spectating, and video and picture sharing. The benefit to gaming companies is more consistent revenue from subscription fees -- rather than game and console sales -- and the ability to dispense with expensive physical game distribution.

However, unlike TV and movie streaming, cloud gaming is a little more complicated as it requires the processing of inputs. In the case of online multiplayer games, the server on which the game is hosted needs to process the inputs from dozens of users and stream the video results back to all players. That makes it nearly impossible for customers in areas without broadband internet to play. That infrastructure barrier is quickly shrinking, though, and technology has advanced to the point that the other necessary capabilities for cloud gaming are now a reality.

A hint at the future of gaming

The potential elimination of gaming hardware could eventually spell doom for Sony's (SONY -1.87%) PlayStation and Microsoft's (MSFT -1.44%) Xbox console platforms. That's why recent acquisitions and reorganizations are important for the two console makers. Microsoft purchased cloud gaming platform PlayFab early in 2018, and Sony reorganized its cloud computing assets into a new business division to help streamline operations and encourage growth. Both are hinting at the cloud being the future.

For now, most gamers still need hardware to play. The continued advancement of cloud technology could eventually change that, though. Microsoft and Sony are likely working to develop their own cloud gaming services because of threats from the likes of Amazon.com (AMZN -1.94%) and Alphabet (GOOG -2.16%) (GOOGL -2.32%), both of which have been trying to woo gaming developers to their video game hosting and development services. Amazon made its own cloud gaming acquisition earlier this year to bolster its efforts when it purchased small cloud-gaming company GameSparks.

Which company will win this battle? While Microsoft and Sony have the most to lose because of Playstation and Xbox, its possible just about every company wins. According to the Entertainment Software Association, the video game industry grew 18% in 2017 to $36 billion. Cloud computing has the potential to make the gaming industry even bigger. Eliminating expensive hardware and increasing the social aspects of video games could open up new demographics, and the expansion of high speed internet abroad could bring new customers into the fold as well.

For investors looking to take advantage of the trend, cloud computing companies like Amazon and Google are a good place to start. Game developers like Electronic Arts will also benefit from potentially more stable subscription fees and lower distribution costs when selling games.

Whichever route you choose, bear in mind that yesterday's winners aren't guaranteed to win again. Look at what Netflix, for example, has done to television with cloud-based video. Cloud gaming could be just as disruptive, and just as profitable for those leading the charge.