In an article last August, I discussed the extraordinary arc (slight pun intended) of Arcos Dorados Holdings ( ARCO 2.57% ) shares over the last couple of years, in the context of the company's brush with a near-implosion from an untenable debt load.

Three business quarters later, the world's largest McDonald's Corporation ( MCD -0.13% ) franchisee no longer faces an existential threat, and operating results have improved substantially. Yet even as customer traffic has picked up, investor interest has waned -- shares are down 12.5% year to date. At a price of roughly $9 per share as of this writing, Arcos' stock has stalled in its multiyear recovery toward the mid-teens level, after falling to as little as $2.20 per share in February of 2016. 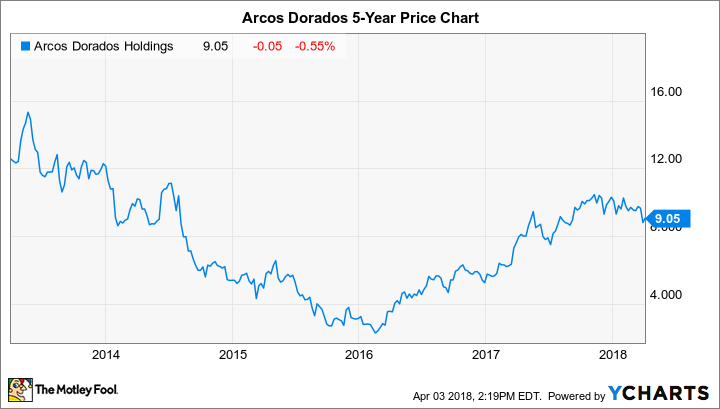 By many metrics, 2017 was an extremely successful year. On March 21st, Arcos reported on its fourth-quarter and full-year 2017 results, and it was able to showcase a full-year revenue increase of 13.3%, to $3.32 billion, as well as a nearly 63.9% leap in net income, to $129.2 million. Comparable-store sales rose handsomely, gaining 11% versus the prior year.

Better results and proactive management of resources over the last two years have reinforced Arcos' balance sheet. After restructuring debt and raising cash through property sales, as well as the refranchising (sale) of some locations to franchisees, Arcos is in a much more secure position. Thus, management recently raised targets on its capital investment plans. In a letter to shareholders, CEO Sergio Alonso announced the following:

We have now built a significant cash balance and are ahead of schedule on our plans for the current three-year period. As a result, we recently announced that we are revising our 2017 to 2019 targets to:

-- Reinvest at least $390 million in existing restaurants, up from $292 million previously, to accelerate the implementation of EOTF ["Experience of the Future" restaurant upgrades].

-- Invest around $660 million in total capex [capital expenditure], up from $500 million previously.

Importantly, we plan to fully fund our investment plans with currently available cash as well as cash from operations. In other words, we do not expect to increase gross debt to achieve these new targets.

The company's revised investment outlook underscores that the worst is likely behind this Latin American quick service giant. And yet some quite reasonable concerns persist for shareholders. Most notably, Arcos Dorados is still dealing with the highly inflationary economies of Argentina and Venezuela.

In particular, Venezuela's runaway inflation and drastic currency depreciation against the U.S. dollar have made it difficult to easily understand Arcos Dorados' quarterly results as reported. To assist shareholders, management now routinely presents results in its earnings press releases with the disclaimer that Venezuela's results are excluded.

These releases provide break-out tables for investors to add back (and deduce) Venezuela's impact. In conference calls, management's comments are punctuated by the repeated phrase "excluding Venezuela." Of course, the company's quarterly earnings filings required by the SEC are presented on an "all-in" basis.

Even for experienced investors, to reconcile Venezuela's EBITDA impact, as well as its effect on revenue before and after currency translation, is a somewhat tedious and often confusing exercise. It's also a constant reminder of the volatility of individual economies throughout Latin America.

One of these volatile economies, and perhaps the most important to Arcos Dorados, is Brazil. In 2017, Arcos added 50 new restaurants, at the top of its projected range, and opened more than half of these units in Brazil. While the Brazilian economy suffered through a period of negative economic growth in 2015 and 2016, last year, the country managed a 1% increase in gross domestic product, signaling a long-awaited recovery.

Loosely translated from the Portuguese, "The Rustic Potato is Back." Image source McDonald's Brazil; a territory in the Arcos Dorados franchise system.

As CEO Alonso stated in the excerpt above, Arcos Dorados will continue to focus expansion efforts in Brazil. This is a point of concern for investors, as the company is essentially building a long-term concentration in a single country. In 2017, Brazil accounted for 45% of total company revenue, and that proportion will only increase in the coming years. Investors well remember that it was political turmoil in Brazil that caused a downgrade of the country's debt in September 2015, in turn setting off Arcos' own debt crisis.

And yet, Brazil is exactly where the company must invest to prosper. Brazil's $1.8 trillion in annual GDP makes it the world's ninth-largest economy, and its well-diversified output dwarfs that of most of its Latin American peers. In other words, a chief source of investor misgiving today may turn out to be one of Arcos' sustaining strengths in the future. But I believe it may take another few quarters of vigorous results for the market herd to embrace this strategy. It seems that a long holding period -- and a strong stomach -- are essential to weathering the volatility that characterizes this successful McDonald's franchisee.