These new initiatives have the potential to catapult NVIDIA even further ahead of the competition in the markets in which it plays. These include computer graphics for gaming and professional visualization applications and the burgeoning AI space, in which the company's graphics processing unit (GPU)-based approach to deep learning (DL) is being rapidly adopted for a wide range of applications. (DL is a type of machine learning within AI that aims to simulate in machines the way humans make inferences from data.)

Below are five key new products and partnerships investors should know about. 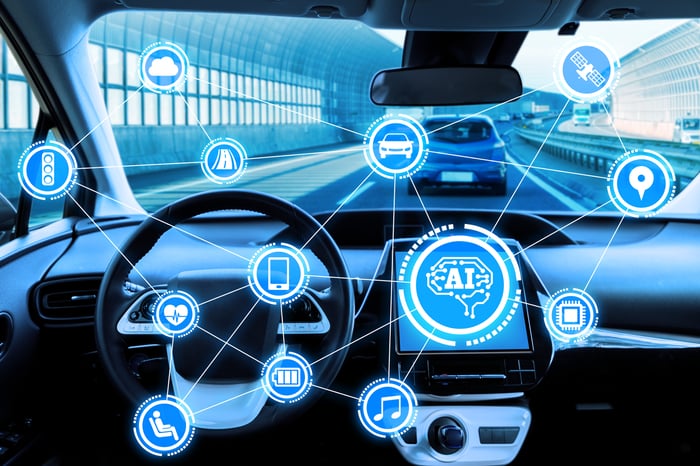 Ride-hailing giant Uber's recent accident involving one of its test driverless vehicles hitting and killing a pedestrian highlights the need for NVIDIA's new DRIVE Constellation, which is a cloud-based system for testing autonomous vehicles using photorealistic simulation, or virtual reality (VR). Compared with testing vehicles on the roads, the platform is able to much more quickly test a massive range of driving scenarios -- some dangerous -- to see how the vehicle reacts, without risking injuries or fatalities.

In this platform -- which will be available to the company's early access partners in the third quarter -- one server runs NVIDIA DRIVE Sim software to simulate an autonomous vehicle's sensors, such as cameras, radar, and lidar. The stream of data that's generated is fed into NVIDIA's DRIVE Pegasus AI car supercomputer for processing. Pegasus' driving commands are then fed back into the simulator, creating a feedback loop that's used to validate that Pegasus is operating the simulated vehicle correctly.

2. Arm partnership to bring AI to the Internet of Things

Under this partnership, NVIDIA and U.K.-based leading semiconductor designer Arm, which is owned by Japan's SoftBank and its Venture Fund, plan to bring AI to billions of mobile, consumer electronic, and Internet of Things (IoT) devices. The duo will integrate the open-source NVIDIA Deep Learning Accelerator (NVDLA) architecture into Arm's Project Trillium platform for machine learning, making it easy for chip companies to integrate AI into their chip designs.

NVDLA is based on NVIDIA Xavier, the world's most powerful autonomous-machine system on a chip, and is aimed at promoting a standard way to design deep-learning inference accelerators. Once NVIDIA's tech is integrated into billions of interconnected IoT devices, it should be more difficult for competing AI technologies to gain a foothold in what's expected to be a gigantic market.

NVIDIA CEO Jensen Huang introduced the company's AI platform for the healthcare industry, called "Clara." (The name is surely a nod to the company's headquarters in Santa Clara, Calif.) In short, Clara is a medical imaging supercomputer, but more precisely, it's "a datacenter-virtualized, remoted, multimodality, multiuser, computational medical instrument," he said. 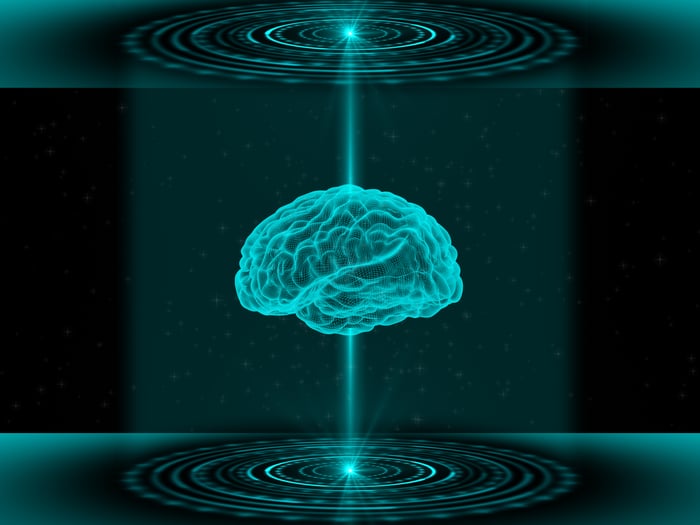 This platform solves an issue with potentially life-and-death consequences: Many medical images aren't nearly as optimal as they could be because there's a lot of less-than-state-of-the-art medical imaging equipment of various modalities in the field. Enter Clara, which can virtually upgrade them. These instruments will be connected to data centers that have supercomputers that are virtualized, or put in the cloud. The healthcare facilities can then use their existing scanners, and Clara will post-process the scans using new computational techniques to improve the images and AI to infer more information from them.

Demonstrating just how fast NVIDIA is moving in the AI space, the DGX-2 AI supercomputer for data centers delivers a 10-times performance boost on deep-learning workloads compared with the previous generation model, which was just launched six months ago.

This amazing performance gain is driven by a few factors, including a doubling of memory to NVIDIA's Tesla V100 data center GPU and what the company is calling a "revolutionary" new GPU interconnection called NVSwitch, which "enables up to 16 Tesla V100 GPUs to simultaneously communicate at a record speed of 2.4 terabytes per second." The DGX-2 is the first single server capable of delivering two petaflops of computational power. (A petaflop, which equals one thousand teraflops, is the ability of a computer to do one quadrillion floating-point operations per second (flops).)

Huang announced the Quadro GV100 workstation GPU based on the company's latest architecture, Volta. This product, aimed primarily at professional designers, is the first GPU that supports NVIDIA's new RTX real-time ray-tracing technology, which the company unveiled in mid-March at the Game Developers Conference 2018. Real-time ray tracing -- long considered the holy grail among the computer gaming industry -- will enable developers to create games with photorealistic images.

Huang said that film studios -- including Disney's Pixar -- designers of products of many types, and architectural professionals are also adopting RTX. The Quadro GV100 graphics card is now available to purchase for $9,000, and it's expected to be available in systems from major original equipment manufacturers (OEMs) starting in June.