A stumble at Alkermes could mean one less competitor for a new drug making its way through J&J's pipeline.

Alkermes' (ALKS -1.09%) hopes for a speedy review of its depression drug ALKS-5461 were dashed earlier this week when the Food and Drug Administration (FDA) issued it a Refusal to File letter, citing inadequate proof of efficacy. Alkermes won't find out exactly what the FDA wants to see from it until it has a meeting with the regulator, but it appears that a new trial may be necessary. The delay caused by the FDA's concerns could be considerable, and if so, it could be good news for Johnson & Johnson (JNJ -1.00%), which is developing a competing drug: esketamine.

Filling a gap in care

Major depression is nothing to take lightly. Unlike those "blue" type feelings we all get from time to time, patients with major depression disorder (MDD) endure periods of overwhelming sadness that can significantly impair their quality of life. 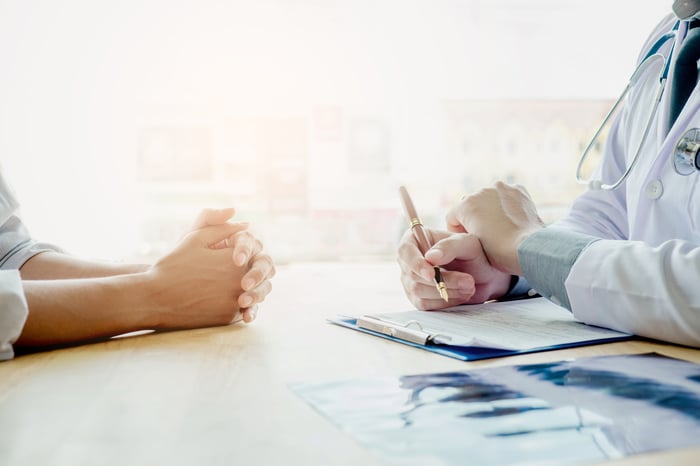 According to the National Institutes of Mental Health (NIMH), about 16 million adults in the U.S. have at least one episode of major depression every year. The World Health Organization (WHO) estimates that 350 million people suffer depression globally.

Since so many people suffer from major depression, treating depression is a multibillion-dollar market. Yet, despite the widespread use of antidepressants, there's still an unmet need for the 30% of patients who fail to respond to existing treatment choices.

A new approach hits a roadblock

ALKS-5461 works differently than traditional antidepressants. In an intriguing approach, it combines the opiate receptor blocker, buprenorphine, with samidorphan, a drug that reduces the euphoria associated with buprenorphine and thus, its risk of abuse.

In January, Alkermes filed for FDA approval of ALKS-5461 after the drug delivered positive efficacy in its Forward-5 study. In that trial, it significantly improved ratings from baseline on a common depression measure versus a placebo in patients who were resistant to antidepressants.

The positive trial results, however, followed two phase 3 trial failures and apparently, the victory in just one of these three late-stage studies wasn't enough to convince the FDA of ALKS-5461's value.

On Monday, the FDA issued Alkermes a Refusal to File letter, and while management won't have a full understanding of the FDA's objection until it has its meeting, it did report that the FDA's position is that the application package doesn't provide enough insight for it to conduct a "substantive review" because of "insufficient evidence of overall effectiveness for the proposed indication." Alkermes also said that "additional well-controlled clinical trials are needed prior to the resubmission."

The FDA also wants more information relating to the bioavailability of buprenorphine in patients taking ALKS-5461.

The door opens wider for J&J

The worst-case scenario of the FDA requiring Alkermes to conduct an additional trial could be best-case scenario for Johnson & Johnson's esketamine. Like ALKS-5461, esketamine targets treatment-resistant patients by using a unique mechanism of action.

Sold under the brand names Ketanest and Ketanest S for use as a general anesthetic, esketamine's midstage trials as an antidepressant are encouraging. In treatment-resistant patients, esketamine nasal spray delivered statistically meaningful improvements on a common depression scale when compared to a placebo. Esketamine is currently in phase 3 trials that are expected to read out data beginning in Q2 2018, and if the data is good, J&J plans to file for FDA approval in adults at imminent risk for suicide by the end of this year.

What to watch for next

Esketamine's data will begin being released soon, so investors should keep tabs on Johnson & Johnson's press releases over the coming weeks. Depression trials are notorious for failure due to the placebo effect, so it wouldn't be too surprising if at least one of esketamine's studies misses the mark. As long as the majority of its trials succeed, J&J's likely to follow through on filing for approval. As for Alkermes, the company should be able to tell investors more about ALKS-5461's future once it sits down with the FDA. Overall, however, it appears that another trial could be necessary, and that suggests investors might want to focus on other drugs in Alkermes' pipeline.