When you think of music streaming, Amazon.com (NASDAQ:AMZN) is unlikely to be one of the companies that first comes to mind. The market for paid music-streaming subscriptions is largely dominated by freshly public Spotify and Apple, which have approximately 75 million and 38 million paying subscribers, respectively. You might think that Amazon is a small fish in the music-streaming market. 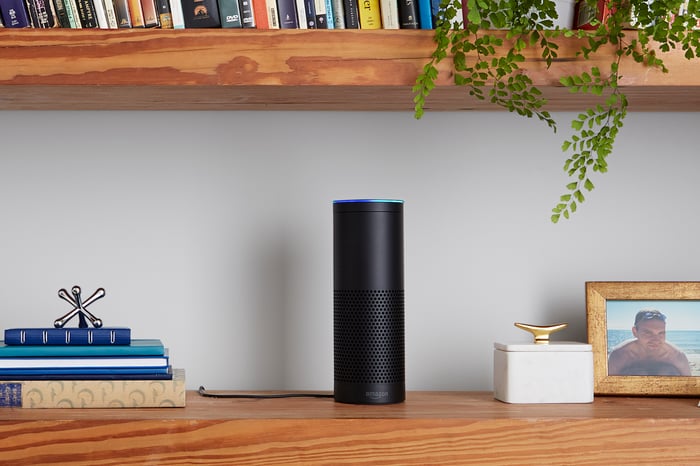 Amazon has "tens of millions" of music subscriptions

Billboard reports that Amazon has finally shared some details regarding the size of its music-streaming business. In classic Amazon fashion, the e-commerce giant says it now has "tens of millions" of paid subscriptions. Keep in mind that Amazon offers two separate music streaming services. There's Prime Music, which includes just 2 million songs and is included with Amazon Prime, and then there is Amazon Music Unlimited, which is more comprehensive and is comparable to Spotify or Apple Music, including tens of millions of songs.

Amazon Music Unlimited offers a couple pricing tiers, including an Echo Plan that only streams to a single Echo device for just $4 per month. An individual plan is $8 per month ($79 per year if billed annually) for Prime members, or $10 per month for non-Prime members. There's also a family plan for $15 per month.

The "tens of millions" statement appears to include both services, although Amazon says that the number of Amazon Music Unlimited subscriptions has doubled in the past six months.

Given Amazon's top dog status in smart speakers, it should come as no surprise that Echo devices are driving much of this growth, Apple Music chief Steve Boom told the outlet. Smart speakers are where all the growth in Amazon Music Unlimited is coming from, with Echo devices bringing new users into the market for paid streaming. That includes demographics and genres that have been slow to transition to streaming: older listeners and country-music listeners.

I'd be interested to know if the affordable Echo plan is coaxing users into trying out the service, and if those listeners subsequently upgrade to full-featured plans to utilize it across devices. However, I wouldn't expect that level of granular detail from a company that is demonstrably averse to investor transparency.

It's safe to say that Amazon is currently the No. 3 player in the paid music-streaming market behind Spotify and Apple. Last summer, boutique media and technology analysis company MIDiA estimated that Amazon had approximately 16 million music subscribers between Prime Music and Amazon Music Unlimited. That estimate would have put Amazon as the No. 3 player at the time, and the user base has only grown since then.