You might be surprised by the pay increases given to big pharma CEOs in 2017.

The average pay increase for all U.S. workers last year was 3.1%, according to the Society for Human Resource Management. But based on recent regulatory filings submitted by several major biopharmaceutical companies, their CEOs received salary increases averaging 3%, a little below the average pay hike for most Americans.

There's more to the story, though. The biggest of the big pharma companies reporting their executive compensation for 2017 so far are AbbVie (NYSE:ABBV), Bristol-Myers Squibb (NYSE:BMY), Gilead Sciences (NASDAQ:GILD), Johnson & Johnson (NYSE:JNJ), and Pfizer (NYSE:PFE). While the companies gave only modest salary increases to their CEOs, it was a different story when it came to total compensation. Which of these big pharma CEOs least deserved their boosts in pay? 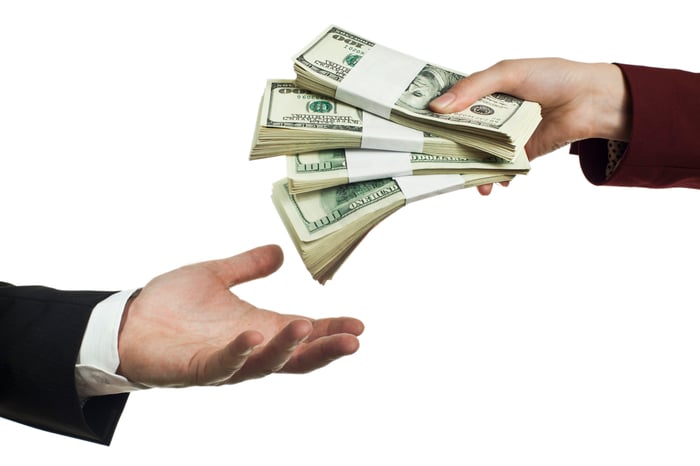 Salary increases for the big pharma companies' CEOs really were modest. However, the CEOs didn't start out with modest salaries. 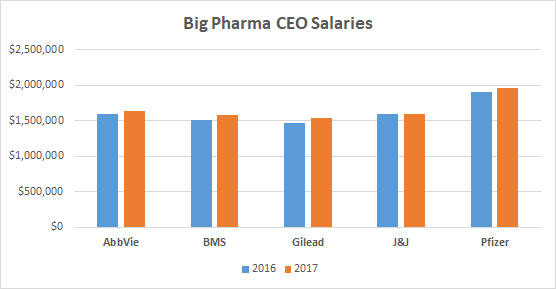 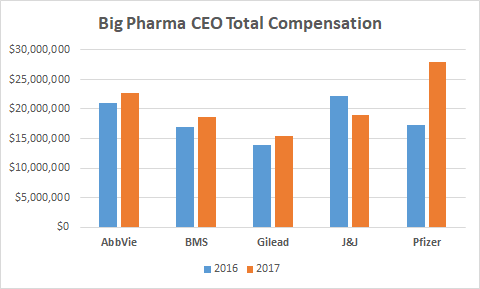 Pfizer CEO Ian Read was the big winner, with a total compensation increase in 2017 of 61%. The biggest loser (relatively speaking, of course) was J&J's Gorsky, who saw his total compensation drop last year by more than 14%. Gorsky's annual performance bonus in 2017 was cut by $700,000 compared to the prior year. His long-term incentive awards fell nearly $2.5 million.

How their companies performed

Hindsight is 20/20. We can look back to see how each big pharma stock performed relative to the CEOs' salary and total compensation increases, and the record shows something quite interesting. 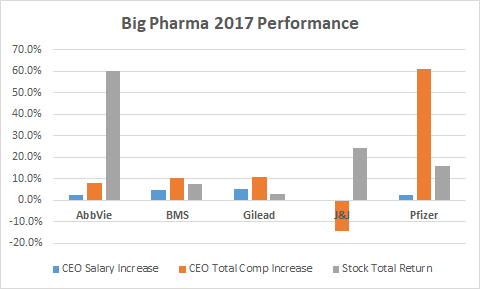 AbbVie's total return, including stock gains and dividend reinvestment, was by far the greatest of these big pharma companies. Probably the most important reason behind the tremendous performance by AbbVie was that the company negotiated a favorable deal with Amgen that keeps the biotech's biosimilar to AbbVie's top-selling drug Humira off the U.S. market until early 2023.

Johnson & Johnson CEO Alex Gorsky didn't get a pay raise and saw a double-digit percentage decrease in total compensation last year. That didn't correlate at all to the healthcare giant's 2017 performance, though. Thanks largely to acquisitions, J&J posted growth that helped drive the stock higher.

Three of these big pharma CEOs arguably didn't deserve their higher pay, in retrospect. BMS's Caforio and Gilead's Milligan received total compensation increases that were greater than their stocks' total return in 2017. But the most glaring outlier was Pfizer, whose CEO received a huge total compensation boost last year that was nearly four times the stock's total return.

Are they worth the big bucks?

CEO compensation can be a touchy subject. Some point to the great discrepancies between CEO pay and the salaries of their companies' employees. Others defend high compensation for CEOs, claiming that it's money well spent to grow shareholder value.

My view is that it's hard to justify the exorbitant increase in total compensation that Pfizer gave Ian Read. It's not that Read hasn't been a pretty good CEO. I just think there are plenty of individuals who could do an equally good job at a much lower price tag.

On the other hand, I don't think we can fairly assess the value that a CEO brings to the company based on the stock performance over just one year. Also, other variables should be factored into the equation. Gilead, for example, has seen its revenue and earnings decline significantly -- but not because of anything John Milligan did. The company is essentially a victim of its own success, with its hepatitis C franchise revenue falling primarily due to lower patient starts, which are in turn a result of Gilead's drugs curing so many patients in recent years.

Perhaps the best way to compensate CEOs to align with shareholder interests is by granting stock options that provide incentives for executives to achieve significant long-term stock appreciation. I'd love to see at least 95% of big pharma CEOs' total compensation tied to stock options that weren't slam-dunks. For now, shareholders can at least take comfort that even the highest-paid big pharma CEOs receive only a sliver compared to the companies' overall revenue and earnings.