Please ensure Javascript is enabled for purposes of website accessibility
Log In Help Join The Motley Fool
Free Article Join Over 1 Million Premium Members And Get More In-Depth Stock Guidance and Research
By Harsh Chauhan – Apr 5, 2018 at 6:55AM

Apple and Garmin are all set to win big from this fast-growing market.

The good news is that the explosive growth of the wearables market is expected to continue in the long run, with Accuray Research estimating that sales in this space will increase at an annual pace of 28% through 2025. So the wearables market could prove to be a gold mine for growth-oriented investors, and Apple (AAPL -4.49%) and Garmin (GRMN -1.38%) look like smart bets in this space. Let's see why. 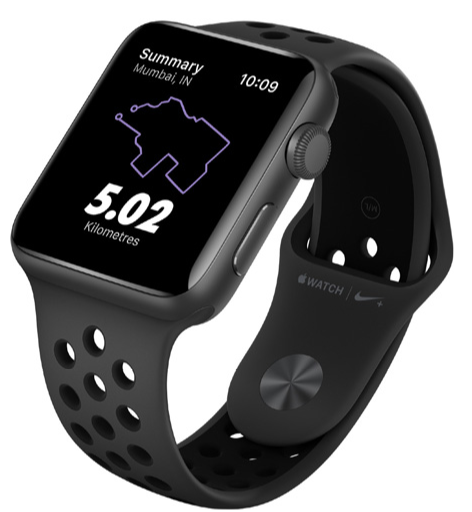 Apple has established a clear lead

Smartphone giant Apple currently leads the wearables market with a 15.3% market share, a slender advantage over second-place Xiaomi, which had a 13.6% market share at the end of 2017. However, Cupertino made a big jump in this space last year as shipments increased almost 56% year over year to 17.7 million units, according to IDC. All of the other major players in the space posted flat results or year over year declines.

Looking ahead, Apple is expected to increase its lead over rivals thanks to the popularity of its Watch. In a 2017 survey, half of U.S. consumers were aware of the Apple Watch, while the second most widely known device was Samsung's Gear, with 29% of survey responders saying that they knew the brand.

Apple's massive lead over its rivals in terms of brand awareness was one of the key reasons behind the massive jump in its smartwatch sales last year. Additionally, the company made a smart move by not going into the fitness-tracker market like Fitbit. Consumer preference has shifted from basic wearable devices such as fitness trackers to highly functional smartwatches, and Apple's technological advantage here has helped it steal a march on rivals.

In particular, Fitbit's reliance on pricey but less functional fitness trackers led to a 31.6% decline in shipments last year. As a result, the company has relinquished its top spot in the wearables space, where it had enjoyed a comfortable lead with a 21.5% market share at the end of 2016. What's more, Fitbit's attempt at making a smartwatch has fallen flat.

The company's Ionic smartwatch, which was released before the 2017 holiday season, failed to lift sales. Fitbit made a mistake by pricing the Ionic at $300. Consumers decided that the Apple Watch Series 3 was a better value proposition, since it starts at $329 and is rich in functionality with features such as cellular connectivity and better app integration with Apple's device ecosystem.

As Apple's smartwatch is already in its third generation, it won't be surprising if the company's wearables lead expands further. While close rival Fitbit is just getting started in this space, Cupertino is preparing for its next-generation offering. The Apple Watch Series 4 could hit the market in September, with new features such as a built-in camera, more health sensors, and a bigger battery.

Another big advantage for Apple in the smartwatch space is its huge installed base of iPhones. UBS estimates that there are 800 million active iPhones globally, and the number could surpass 1 billion this year. These existing iPhone customers could play a big role in pushing sales of the Apple Watch higher thanks to the stickiness of Cupertino's ecosystem, making Apple one of the best bets to take advantage of the rapid growth in the wearables market.

However, investors shouldn't expect the Apple Watch to move the needle in a big way for the company just yet as it is still a small part of its huge empire. Apple's smartwatch sales are included in its "Other" segment, which supplied $5.5 billion in revenue last quarter as compared to total sales of $88.3 billion.

Garmin can make a strong comeback

Unlike Apple, Garmin had a tough time in the wearables market last year. The company's shipments were flat year over year in 2017, but its market-share position slipped down as the overall market grew more than 10%. Still, there were encouraging trends in Garmin's wearables business last year that should help it get back on track sooner rather than later.

Consumers' increasing preference for smartwatches over fitness trackers was a headwind for Garmin in 2017 as it was primarily relying on sales of basic activity-tracking devices. The company's revenue from the fitness segment dropped 7% in 2017 to $762 million as demand for fitness trackers waned. Revenue from its outdoor segment, however, shot up 28% to $699 million.

Garmin's outdoor segment includes its Fenix 5 range of GPS-enabled adventure watches, which have helped boost sales in recent quarters. Looking forward, Garmin expects a 13% spike in outdoor revenue this year thanks to the Fenix lineup.

The good news is that Garmin is going all-out to make its outdoor watches more popular to boost sales. For instance, it is now offering more than 3,500 apps, watch faces, and widgets on the Connect IQ platform to increase the functionality of its watches. More importantly, customers are warming up to the company's app ecosystem as evidenced from the 45 million downloads since inception. Half of the app downloads on Connect IQ happened in the past year, indicating that the popularity of this platform has remained strong.

Looking ahead, Garmin's product-development moves should enable it to attract more customers. For instance, the recently launched Garmin Forerunner 645 watch provides offline music support for up to 500 songs, allowing users to leave their smartphones at home when they go running. The watch will also support contactless payments through Garmin Pay.

Even though Garmin is targeting a niche market for GPS-enabled sports watches within the wearables space, there's strong revenue opportunity in this sub-segment. According to one estimate, the market for GPS-enabled fitness devices could hit $3 billion in revenue in the next five years as shipments clock up an annual run rate of 120 million units.

If Garmin corners a substantial portion of this market, its top line could receive a substantial bump as the potential revenue opportunity available here is equal to the revenue generated in the past 12 months.