Please ensure Javascript is enabled for purposes of website accessibility
Log In Help Join The Motley Fool
Free Article Join Over 1 Million Premium Members And Get More In-Depth Stock Guidance and Research
By Daniel B. Kline – Updated Apr 5, 2018 at 1:38PM

The company works to leverage its Happy Hour.

Since 2010, Starbucks (SBUX -0.63%) has offered Happy Hour, a seasonal promotion where customers could get Frappuccinos for half their regular prices at certain times of the day. That, as you might imagine, was a popular offer that drove afternoon traffic (albeit at the expense of putting stress on the chain's baristas, who had to make the somewhat complicated concoctions).

In recent years, though, interest in the promotion has faded and in January, the company reportedly confirmed to employees that it would not be having the promotion this spring.

But that turned out not to be true. Happy Hour came back, but in April instead of May, when it usually appears. It's also not limited to Frappuccinos, and this time, it's invitation-only. 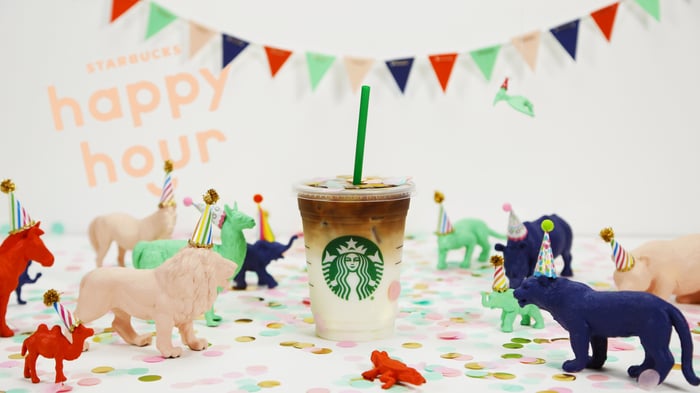 Starbucks Happy Hour is back, but it's changed. Image source: Starbucks.

Under the new system, Happy Hours will appear year-round and include more products. The most-recent promotion was one day long and it offered half-off on espresso drinks from 3 p.m. to close at participating Starbucks. In addition, the new deal isn't open to just anyone.

It's "invitation-only" and it requires a code that Starbucks Reward program members can get in the chain's app. Non-members, however, can get a code by going to Starbucks.com/HappyHour and signing up with an email address.

"With nearly 100 million customers in our stores every week, we're looking for more opportunities to engage directly and personally, providing them with special benefits and offers that are meaningful," said Starbucks Chief Strategy Officer Matt Ryan in a press release.

Why is Starbucks doing this?

There are at least two reasons the company is doing this. First, it lets the company have a nimble way to test short-term promotions to drive afternoon traffic. It will get to see what products and price points entice people to buy while also testing things like what days of the week or times of day work best for messaging and the sales.

This new Happy Hour allows Starbucks to try a lot of ideas without committing to any. (Baristas should be happy because even if Frappuccinos are the offer, it may only be for a day or two, not a two-week period.)

Second, making the offers limited to members and people who provide an email in exchange for a code fits the chain's digital strategy. Starbucks wants to capture emails from the 60 million customers who visit its U.S. stores who are not loyalty program members.

It has changed its Wi-Fi login system to accomplish that, asking for an email in exchange for the customer to never have to log in again on that device in any company-owned store.

The limited-time and changing nature of the Happy Hour discounts should reinvigorate the program. That should help afternoon sales and give Starbucks increased same-store sales, which is something the chain has struggled with.

On the digital side, collecting more emails makes sense. Doing that will let the company market to people who have yet to commit to its app or loyalty program.

Figuring out what works and getting consumers to understand the new offers may take time. Still, this is a smart play that takes something familiar and makes it new.