The Chinese cloud services company's stock is down roughly 50% from the high it hit following a cryptocurrency announcement last October.

Shares of Xunlei (XNET 1.46%) lost 21% of their value in March, according to data provided by S&P Global Market Intelligence. 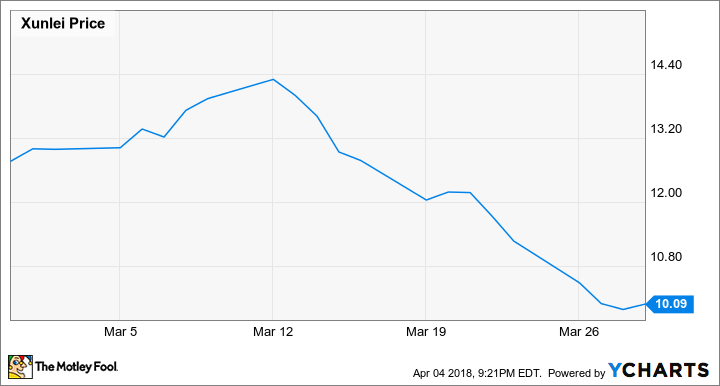 The company's announcement on March 14 that it would delay publishing its fourth-quarter earnings results by a trading day, followed by results that came in below the market's expectations, appear to have been the main catalysts behind the sell-offs. Cool-down from the initial excitement that the company would be focusing more on blockchain initiatives was likely also a factor.

The cloud services company's sales climbed 128% year over year in the fourth quarter to reach $82.4 million, and net income swung from a loss of $8.5 million to $3 million, but the market apparently didn't think this was enough to justify the business's valuation. Shares are still up roughly 180% over the last year after a big pricing run-up that took place after Xunlei announced it would be launching a blockchain-based file-sharing network and related cryptocurrency.

It looks like the company's cloud services business will continue to drive rapid sales growth in the near term. The company is targeting first-quarter sales between $81 million and 85% million, representing $129% year-over-year growth at the midpoint.

However, the stock's value seems like it will remain closely tied to the success or failure of its LinkToken cryptocurrency, and the possibility of further regulation from the Chinese government or other disruption in the crypto space are substantial threats. Momentum for its cloud-computing services is encouraging, but the extent to which shares have increased in value following Xunlei's coin announcement makes the stock a risky investment prone to high volatility.