Oppenheimer jumps to grasp at a falling knife.

"Don't catch a falling knife" is perhaps one of the first bits of stock market wisdom that new investors encounter. When a stock is trading far below its historical highs, that's rarely a sign that things are going well for the business. Rather, it generally indicates that something has gone seriously wrong -- that far from being ready to bounce back, the knife could continue falling, and deliver a nasty cut to any investor foolish enough to grasp at it.

And yet, this morning, analysts at Oppenheimer & Co. announced that they're going to do just that. Despite the fact that shares of Universal Display Corporation (OLED 2.95%) stock have plummeted 50% in the last three months -- the very definition of a falling knife -- Oppenheimer is urging investors to go ahead and buy it.

Is that smart? Let's find out. 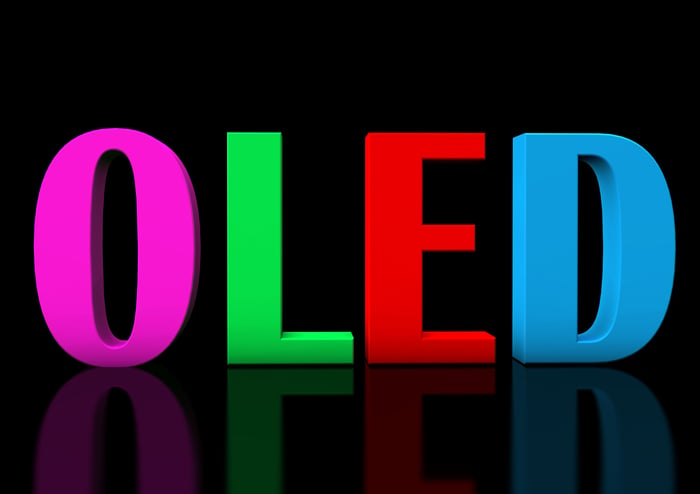 OLED TV is more than just a technology. It's a stock -- and one analyst thinks you should buy it. Image source: Getty Images.

OLED is risky -- or rather, it was

Oppenheimer begins today's endorsement on a bit of an off note, explaining in a note covered on StreetInsider.com (subscription required) that it has "long been sidelined as we believed investors were not appropriately weighing potential risks" inherent in investing in Universal Display stock. Among other things, Oppenheimer worries that "adoption" of organic light-emitting diode display (OLED) technology "in key markets" could take place slower than investors expect.

Worse, there's a possibility that "improvement of LCD technology, and the threat from alternative materials" could slow down acceptance of OLED, or prevent its widespread adoption altogether. That being said, after sitting on the sidelines and watching these risks take a toll on Universal Display stock (which again -- has fallen 50% in less than three months), Oppenheimer is now becoming confident that the risks it foresaw are now "fully priced in" and Universal Display stock has become "oversold," so the analyst is upgrading it to outperform.

With Universal Display stock now down 50%, it's arguable that about half the risk has now been squeezed out of the stock. At the same time, Oppenheimer sees a whole series of potential positive catalysts that investors may be discounting:

OLED screen production in China, says the analyst, is set to "ramp" up in 2019 and 2020. OLED television sets are already available for sale (albeit prices remain high). And Universal Display is believed to have developed a solution to the problem of the short lifespan of current blue light OLED pixels, and Oppenheimer says it could possibly announce an upgraded "commercial blue emitter" at some point "in the next two years," which could drive new royalty revenue for the company.

Between the cheaper stock price and the anticipation of catalysts, Oppenheimer says it's now looking for an opportunity to buy Universal Display stock "on any near-term weakness related to license and royalty revenue uncertainties or poor 1Q18 results." And yet, by these very words, Oppenheimer appears to be acknowledging that even 50% below its prices of just this past January, Universal Display stock is still not obviously cheap.

On that much, at least, we can agree.

Consider: Over the past 12 months, Universal Display has reported GAAP profits of $104 million (according to data from S&P Global Market Intelligence). These are high-quality profits to be sure. Free cash flow (FCF) backs up essentially 100% of reported profit. And yet, at a market capitalization of $4.8 billion, the stock continues to sell for more than 45 times both earnings and FCF.

Does this mean that Oppenheimer is wrong to recommend investing in Universal Display? Not necessarily. Fact is, despite the still-high stock price, many analysts maintain similarly high hopes that Universal Display will grow into its valuation. Consensus estimates for future earnings, also detailed by S&P Global, show that on average, analysts who follow Universal Display stock believe the company will grow its profits by 31% a year on average over the next five years.

If the company succeeds in fulfilling these expectations (without enjoying a corresponding rebound in stock price), it won't be long before Universal Display stock is what Oppenheimer believes it to be today: A buy.