The retail giant is reportedly in talks to take over the health insurer. Here's why it could make sense.

The world's largest retailer could be preparing to buy a health insurance company. According to The Wall Street Journal, Walmart (WMT 5.11%) is in preliminary talks to take over Humana (HUM -0.68%), an insurer worth $37 billion, in a deal that marks the latest effort by a retailer to move into the healthcare space.

For Walmart, it would be not only its biggest acquisition ever, but its latest in a line of splashy moves: In 2016, it acquired Jet.com for $3.3 billion, then acquired smaller e-commerce retailers including Bonobos and ModCloth. Even with that recent track record, an aggressive push into healthcare is a surprising change of direction for the retailer.

What could the retail giant have to gain from a Humana acquisition? Let's take a look at three possible motivations for Walmart's pursuit of the health insurer. 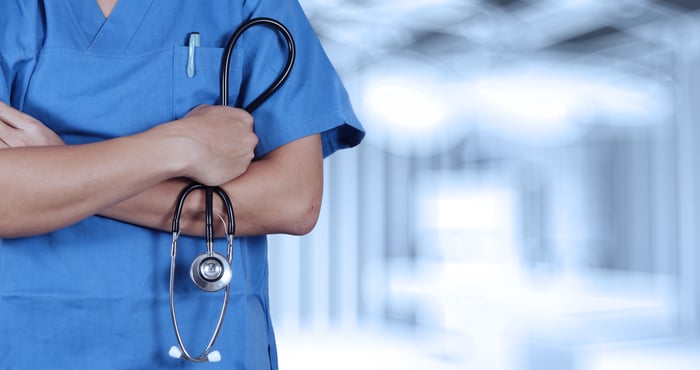 Walmart's is the United State's largest private employer, with 1.5 million Americans on its payroll, and it spends about $500 million on domestic healthcare costs. That may seem like a pittance for a company that generates $500 billion in annual revenue, but with about $14 billion in adjusted net income, $500 million makes up a significant percentage of its bottom line. If it could trim some of those costs, it may help drive growth at a time when Walmart has struggled to grow profits, as it's intensely competing with Amazon.com (NASDAQ: AMZN) and other retailers and grocers.

Acquiring Humana could also help Walmart improve its health insurance offerings, making it more appealing to prospective employees -- after salary, health insurance is often the most important part of a compensation package.

2. Keeping up with Amazon

Ever since Doug McMillon became CEO of Walmart in 2014, he has focused on adapting the company for the future so that it can better compete with Amazon. He's raised wages, cleaned up stores, and his boldest move so far has been buying Jet.com and putting its founder Marc Lore in charge of the Walmart's e-commerce operations. After the addition, Walmart's e-commerce growth skyrocketed, as the company rapidly expanded its grocery pickup program and added features like free two-day delivery for orders (with a $35 minimum).

In January, Amazon announced it was teaming up with Berkshire Hathaway and JPMorgan Chase to launch its own internal health insurance; presumably, if it's successful, the trio would open it up to non-employees. In December, CVS acquired Aetna, allowing the drugstore chain to grab even more of consumers' healthcare dollars. With CVS and Amazon both angling for a piece of the fast-growing healthcare market, Walmart is following suit. Walmart is also one of the biggest pharmacy operators in the country, so extending its reach into healthcare with Humana could make sense.

Walmart and Humana target similar markets. With stores spread across the country, Walmart focuses on middle- to low-income Americans, and its average shopper is around 50 years old. Humana's strength is with older Americans, as it's the second-biggest provider of Medicare Advantage plans, holding 17% of that market. Older Americans are also less likely to shop online, making them ideal customers for Walmart to leverage; the retail chain can count on them to make regular visits and to buy other things when they visit Walmart stores.

As the baby-boom generation ages into retirement, the Medicare population is expected to expand. Medicare Advantage should be a growth engine in the insurance industry, giving Walmart a valuable growth market and an opportunity to add new customers to its retail business. The two companies are already partners on Medicare Part D drug plans.

Additional evidence of Walmart's interest in the healthcare space came just days after reports broke that Walmart was interested in Humana, when CNBC said Walmart could acquire PillPack, a start-up that manages prescriptions by delivering different pills packaged together, for less than $1 billion. As a delivery business, PillPack is of interest to e-commerce operators, and Amazon had reportedly sought to acquire the company.

According to The Wall Street Journal, Walmart and Humana are discussing a range of options, including a merger -- considering Humana's value, a full-on acquisition may be too rich for Walmart to stomach. However, a strategic partnership or a similar deal would certainly work to the retailer's advantage: With its scale and customer relationships, Walmart can benefit in several ways from a stronger position in healthcare. Don't be surprised to see the company make a play for Humana or PillPack in the coming weeks.