Please ensure Javascript is enabled for purposes of website accessibility
Log In Help Join The Motley Fool
Free Article Join Over 1 Million Premium Members And Get More In-Depth Stock Guidance and Research
By Maxx Chatsko – Apr 7, 2018 at 7:35AM

The steel stock is financially strong, but investors shouldn't get too carried away with potential impacts from tariffs just yet.

The first quarter was a wild one for steel stocks. After months of speculation, in early March the United States announced its intention to introduce steep tariffs and possible quotas on imported steel and aluminum. While the news initially sent steel stocks higher, the excitement didn't last very long.

In fact, most steel stocks have fallen since the March 5 announcement from the White House. Shares of United States Steel Corporation and AK Steel dropped 25% and 14%, respectively. Even the more conservative Nucor Corporation (NUE -1.36%) has seen its stock fall 13% in that span.

The events of the last month come with a blunt message for investors: despite its financial strength, investors shouldn't get greedy with Nucor Corporation stock on hopes of tariffs alone. 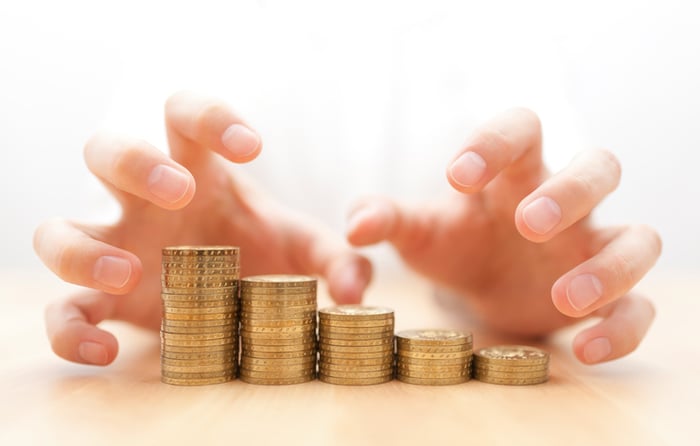 The $19 billion American steel manufacturer turned in a solid year of operations in 2017. That's hardly surprising, of course, as the ambitious management team set the goal of exiting the recent industry downturn stronger than it entered. Acquisitions, new facilities, and upgraded infrastructure all combined to make it happen. In fact, Nucor turned in its best year since the Great Recession.

Despite a sequential drop from the third quarter to the fourth quarter of last year, full-year 2017 revenue and earnings were up. Operating expenses dropped thanks to improving operational efficiency driven by higher production volumes. Shareholders saw the plan set in motion years ago continue to play out -- and management expects the momentum to continue in the first quarter of 2018. Here's what management said in its press release

In other words, Nucor management expects much of the same going forward. The top steel stock is looking to continue reducing its leverage ratios, delivering top and bottom line growth, executing on operating efficiency measures, and hopefully beating the returns of the S&P 500.

But although first-quarter 2018 guidance was issued at the end of January and prior to the latest tariffs on imported steel, that doesn't necessarily mean investors should expect any boost to operations (yet).

Shocking no one, the United States has granted exemptions to companies, industries, and countries near and far for various steel and aluminum products. So far this is unfolding in a strikingly similar way as past attempts to introduce limits on foreign steel, in which tariffs were more of a paper tiger that packed their greatest punch in the political arena.

That realization has played a large role in the decline of steel stocks since March 5, including a 13% decline for Nucor shares. It also demonstrates to investors the complexity of international trade, how long it will take to implement changes, and how difficult it will be to make tariffs or quotas have the desired effect. That, and the historical underperformance of steel stocks compared to the broader market, should be enough to remind investors not to get greedy with the industry. 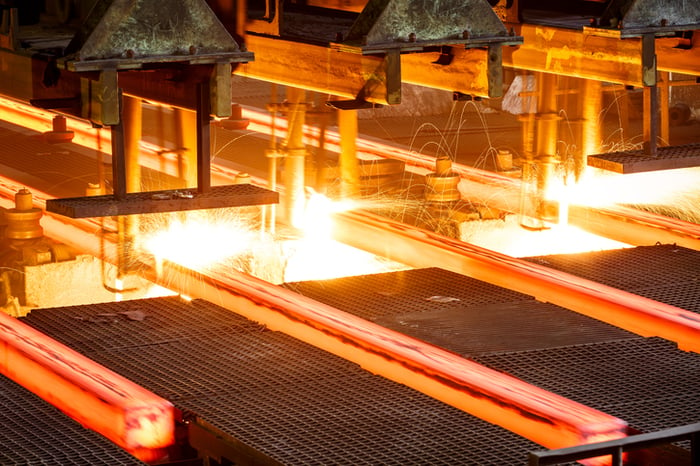 However, it's worth pointing out that this time really might be different -- but it will take time to pay off for domestic steel manufacturers. Why? China is the most important steel-producing country to rein in when it comes to international trade, especially since the country accounts for all of the global excess in production and subsidizes dumping onto others, most notably Uncle Sam.

What many analysts and commentators seem to be missing is that the United States has considerably more leverage when it comes to international trade today than it did in 2002, when the last significant steel tariffs were implemented. America's increasing energy exports (specifically to China), commitments from the European Union to side against China (extracted in exchange for exemptions), and China's lack of bargaining power on trade (with the exception of agricultural products) could result in tariffs with teeth. That would create a greatly improved operating environment for domestic producers.

Nucor operates a robust business that's among the strongest -- if not the strongest -- in the industry. Investors interested in the company should focus on its growth prospects, valuation metrics, and leverage multiples. Those that think tariffs on imported steel will add a meaningful catalyst that puts the stock decisively into the "buy" category may be sorely disappointed, as international trade disputes could take years to play out. That's why it's best to remain grounded and not get greedy with the steel stock.