Nucor Corporation (NYSE:NUE) released its guidance for fourth-quarter earnings back in December, and at the time management was expecting a profit between $0.50 and $0.55 per share. The result was significantly higher, at $1.20 per share, but that included a significant one-time benefit related to the recent federal tax legislation passed in late 2017, while pressure from imports -- much of which the domestic steel industry says is illegal -- continues to weigh on volumes and steel prices. This was a key reason Nucor's revenues and steel volumes declined from the third quarter.

Even with imports weighing heavily on the market and taking a bite out of Nucor's bottom line, the company still completed its most profitable year in nearly a decade. Keep reading to learn how Nucor delivered, and what to expect from here. 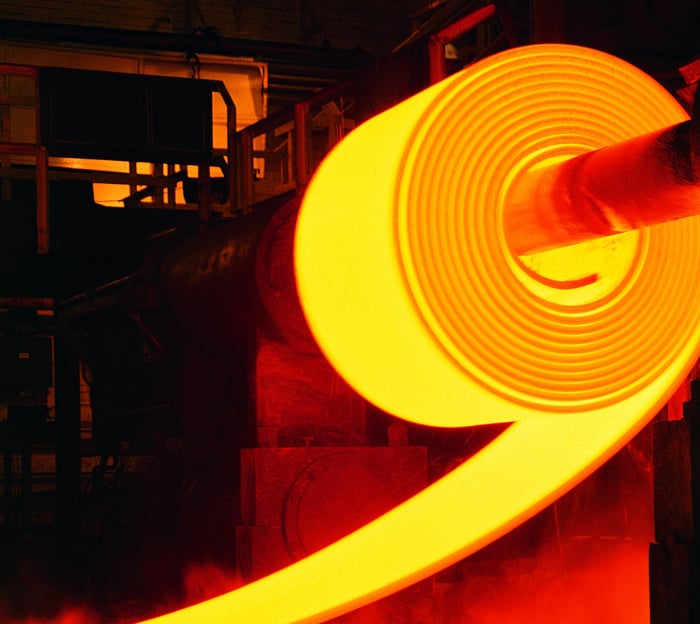 A breakdown of the fourth quarter and year

Nucor delivered a solid fourth quarter, with a profit far better than its own guidance, even when adjusting for the one-time benefit. In total, the company said it got a net benefit of $0.55 per share based on the new tax legislation, giving adjusted earnings of $0.65 per share, a 30% increase from last year.

However, Nucor saw its earnings, revenue, and steel volumes fall from the third quarter. The company reported sales of $5.09 billion in the fourth quarter, down 2% from $5.17 billion in Q3, and adjusted earnings that were down 18%, from $0.79 to $0.65 per share. Total tons shipped to outside customers fell 1% sequentially while steel prices were flat sequentially. Lower volumes resulted in a decline in Nucor's operating rates at its mills as well, down from 83% in the third quarter to 81% in Q4.

Despite the sequential declines, Nucor's full-year results were strong. Revenue increased 25% on a 13% increase in total steel tonnage, with this higher volume boosting operating rates to 85%, up from 78% in 2016. Combined, this performance drove earnings per share 65% higher, to $4.10 per share. In all, 2017 was by far the company's most profitable year since 2009.

Imports continue to weigh on domestic steel, but there's potential help on the way

In the first half of 2017, Nucor and other domestic steelmakers experienced strong results in part because tariffs placed on illegally subsidized steel imports were paying off. However, foreign steelmakers have again ramped up steel imports in other product categories, while also attempting to funnel products through other countries into the U.S. to avoid those tariffs. The company made the following statement in its earnings release:

Total steel imports in 2017 increased by more than five million net tons, or 15.5%, compared to 2016. Additionally, finished steel imports accounted for an estimated 27% share of the U.S. market. Along with other domestic steel producers, Nucor continues to pursue trade cases to combat unfairly traded imports. In 2017, the United States Department of Commerce made several rulings imposing duties on additional steel products that are favorable to the domestic steel industry. In December, the Commerce Department made a preliminary determination that corrosion-resistant and cold-rolled steel from Vietnam that originated in China evaded U.S. anti-dumping and anti-subsidy orders. As a petitioner in the case, Nucor believes the preliminary determination is an important step in fighting efforts to circumvent trade duties.

... We are encouraged by the steady progress that we are achieving through the prosecution of product and country specific trade cases, although the process is still slower than we believe is appropriate. We attribute this success to date to the overwhelming evidence that many foreign competitors receive support from illegal subsidies.

Over the past several years, there has been a protracted battle against imports, primarily from Asia (and specifically China), which has far more steelmaking capacity than it consumes. As a result, the Chinese government -- among others -- has illegally subsidized its steel industry, allowing it to sell steel into U.S. markets for less than it costs to make and ship it. But another round of anti-dumping duties is imminent, and that should help re-establish balance to the domestic market, forcing out non-competitive steel and lifting the prospects for Nucor and other low-cost producers.

Nucor finished the fourth quarter with less than $1 billion in cash and short-term investments, its lowest total since 2013. But its total long-term debt of $3.74 billion was also the least the company has owed in just as long, down $650 million from the third quarter. The company also has $1.5 billion available on an undrawn revolving credit facility that doesn't expire until April 2021, giving it substantial liquidity if the right opportunity to invest comes along.

And there is a lot of growth investment lined up. In November, Nucor announced two significant expansions: a $180 million planned expansion at an Illinois steel mill that will add 500,000 tons of merchant bar quality steel production, and at least $250 million to build a rebar micro mil in Missouri, giving it a logistical advantage over similar products from its competitors. The company expects both of these expansions will begin operations in 2019.

Even with the pressure of imports weighing on Nucor's operating results in both the third and fourth quarters of 2017, Nucor's flexible operations and industry-leading cost structure paid off with its best year in a very long time.

And management expects that its many advantages will result in even better operating results in the first quarter of 2018 than it delivered to finish 2017 (excluding the one-time gain from taxes, of course). The company expects positive pricing momentum to continue and steel demand to remain strong, though higher scrap prices and seasonality are likely to weigh on year-over-year results, along with continued pressure from imports while trade cases play out. It may not be enough to grow earnings over the first quarter of 2017, but it's moving in the right direction.

And looking at the big picture, Nucor continues to invest in growth. Historically, that has paid off with big earnings growth -- a trend that's likely to continue into the future.