Please ensure Javascript is enabled for purposes of website accessibility
Log In Help Join The Motley Fool
Free Article Join Over 1 Million Premium Members And Get More In-Depth Stock Guidance and Research
By Keith Speights - Apr 8, 2018 at 7:19AM

A NASH dash is on -- and these drugmakers could come out on top.

Like pop music hits and sports teams, diseases can rise in the rankings. A relatively obscure disease might later become a top focus of research -- and a top area for drugmakers' profits.

That's what is happening for one disease right now. In 2002, non-alcoholic steatohepatitis (NASH), a progressive fatty liver disease for which no treatment is currently approved, caused only 0.53% of liver transplants in young adults. By 2012, that percentage was nine times higher. NASH is projected to become the leading cause of all liver transplants within the next two years.

NASH is also predicted to be the next huge market opportunity for the biopharmaceutical industry, with some forecasting a global market size of as much as $35 billion per year. It's not surprising, therefore, that a number of drugmakers are racing to develop products to treat NASH. This "NASH dash" presents a great opportunity for patients, but it's also an opportunity for investors.

What are the top stocks for investing in pharma's next massive market? I think Gilead Sciences (GILD 0.90%), Intercept Pharmaceuticals (ICPT 1.75%), Genfit (GNFTF 0.00%), and Madrigal Pharmaceuticals (MDGL -1.72%) especially stand out. 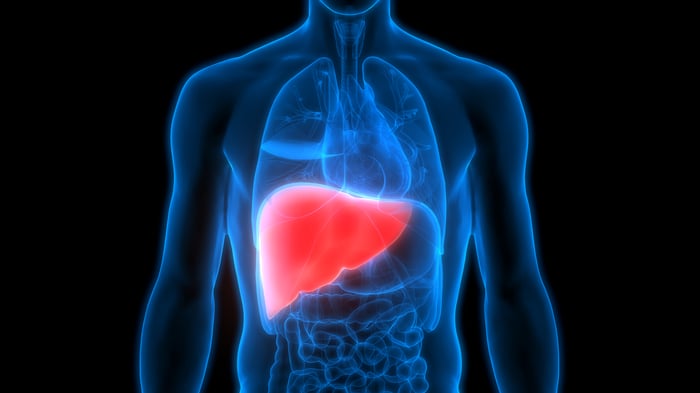 Gilead Sciences boasts one of the broadest NASH pipelines, with three different types of drugs targeting the indication. Selonsertib ranks as one of the most critical drugs for the biotech's future. Gilead expects to report results from late-stage studies evaluating the ASK1 inhibitor in treating NASH stage F3 liver fibrosis and stage F4 cirrhosis in early 2019. If those results are positive, the company should be on track to file for regulatory approval later next year.

Combination therapies could be the best way to treat NASH. That's why Gilead is also evaluating selonsertib in combination with two other NASH candidates, FXR agonist GS-9674 and ACC inhibitor GS-0976, in phase 2 studies. It wouldn't be surprising to see Gilead use some of its big cash stockpile to license or acquire more experimental NASH drugs in the future.

Intercept Pharmaceuticals claims the distinction as the only company with a NASH candidate that has already won approval. However, that drug, Ocaliva, gained approval for treating another indication, primary biliary cholangitis, a chronic disease that causes progressive destruction of bile ducts in the liver.

The company is evaluating Ocaliva in two late-stage studies targeting NASH. One of those studies focuses on fibrosis in NASH patients. Results from this study should be available in the first half of 2019. The other late-stage study, focused on NASH cirrhosis, is currently enrolling patients.

French biopharmaceutical company Genfit shouldn't be too far behind Gilead and Intercept with its lead NASH candidate elafibranor. Genfit expects to report results from a late-stage study of the drug targeting treatment of NASH fibrosis by late 2019. Assuming those results are positive, the company could file for regulatory approval of elafibranor in 2020.

Like Gilead, Genfit sees opportunities for combo therapies. The drugmaker presented promising results from a preclinical study of elafibranor in combination with an FXR agonist last year. Genfit is also exploring further combo studies with elafibranor and other NASH drugs, including those developed by other companies. In addition, the company is advancing development of an in vitro diagnostic (IVD) test for NASH.

Madrigal Pharmaceuticals has made a big splash in NASH in recent months. In December, Madrigal reported encouraging top-line results from a phase 2 study of its lead NASH candidate MGL-3196 that showed significant reduction in liver fat.

The next steps for Madrigal are to present full results from its phase 2 study of MGL-3196. Madrigal also plans to advance the drug to late-stage testing pending discussions with the FDA. Although the company is well behind Gilead, Intercept, and Genfit, I suspect that MGL-3196 could attract attention from these other companies for inclusion in potential combo therapies.

Others on the horizon

There are plenty of other drugmakers hoping to claim their share of the potentially lucrative NASH market. Allergan's lead NASH candidate, cenicriviroc (CVC), had mixed results in a phase 2 study. Allergan is also partnering with Novartis on a phase 2 study combining CVC with Novartis' FXR agonist. Others in the NASH race include big pharma companies Pfizer and Bristol-Myers Squibb, along with smaller players like Galectin Therapeutics and Galmed Pharmaceuticals.

Which company will be the biggest winner in NASH? It's too soon to say. I suspect that Gilead will become one of the top competitors in the market. However, Intercept, Genfit, and Madrigal could also be very successful.

For bargain-hunting or income-seeking investors, Gilead could be a great way to invest in NASH. The big biotech stock trades at only 11 times expected earnings and pays a dividend yielding north of 3%. Aggressive growth investors, on the other hand, could find a lot to like with Madrigal. With a market cap of $1.6 billion, I wouldn't be surprised to see a large company acquire Madrigal in the not-too-distant future.